How Toyota, Kenworth, and Shell Are Developing Fuel Cell Trucks

Tackling the Truck of the Future

The old joke (and the fact that it’s still around says more than you’d like to know about it) is damning. Hydrogen, the molecule that supplies power for fuel cell vehicles, is the fuel of the future – and always will be! Light-duty fuel cell vehicles are now decades away from their early development stage and have been selling in small numbers at retail for several years. The infrastructure to refuel them is slowly growing to support the roughly 6,000 on the road today, almost all – cars and stations – in California. Three models are for sale: the new compact crossover Hyundai Nexo, Toyota’s Mirai sedan, and the Honda Clarity sedan. Sales numbers are not moving like battery electrics.

With fuel cell passenger vehicle sales fairly stagnant, some industry folks started looking for new opportunities. Logically, the best place to explore is an area thought to be beyond the reach of battery electric vehicles – the heavy-duty truck market. The presumption was that these over-the-road behemoths could not be electrified because of the cost and weight of the amount of batteries needed to create a functional truck. Toyota showed the prototype Class 8 truck running on hydrogen in early 2017 and sparked some interest. Previously, some smaller companies had either proposed or shown similar rigs.

Of course, Toyota doesn’t make Class 8 trucks, so the show truck didn’t seem to have a home, even though the truck appeared to be functional and ready to take over a new category. That was until Tesla unveiled its electric Class 8 Semi. Suddenly, it was quite competitive.

The Toyota, which was clearly a debadged Kenworth, was basic. It had two Mirai fuel cell stacks and what looked like a blue tin house behind the cab, full of the cryogenic tanks used to store the on-board hydrogen. It was essentially a proof of concept. The key takeaway for the truck industry was that the truck worked; it could haul a load in and around the ports and not strain its 200-mile range.

The overarching question after watching the truck in operation was, “Okay, it works, but where can we refuel it?” So, Toyota next launched its Project Portal program to initiate testing of the vehicles, which ended up accumulating 14,000 miles of real-world drayage operations, working with a refueling station at Toyota’s port facilities. What hasn’t been specifically disclosed, but will be obvious when you read on, was that Toyota was already in conversations with at least one OEM during this time.

For a commercial vehicle, refueling is not a simple question of locating the closest hydrogen station, although that’s a start. Instead, you’re asking:

▶ Is the station on or close to my travel route?

▶ Can my vehicle fit at the station?

▶ Can it refill fast enough so I’m not losing time? (i.e., is it comparable to diesel or even CNG refueling times?)

Toyota came back recently with a second or third generation of its fuel cell big rig and things have changed. Rather than looking like something put together in Dr. Emmett Brown’s garage, this time the truck has a proper Kenworth badge (and its introduction included remarks by Kenworth engineers discussing their role in this version), and has the fuel cell stacks and storage tanks integrated into the new truck’s design. It still runs silently and is capable of hauling a standard 80,000-pound load of freight.

Toyota, Kenworth, Shell, and the Ports of Los Angeles and Hueneme in California are now part of a just-launched project that will create a prototype of a heavy-duty hydrogen fuel cell ecosystem. Completing the picture is a refueling infrastructure that will help put the trucks on existing service routes, performing tasks like ferrying imported fruit from the port to retail outlets. They call it “Shore-to-Store,” with the sweetener being that it’s done with zero tailpipe emissions. The state of California is dropping $41 million into the mega-project with the expectation that its heavy-duty fuel cell trucks will be close to being ready to go into production. 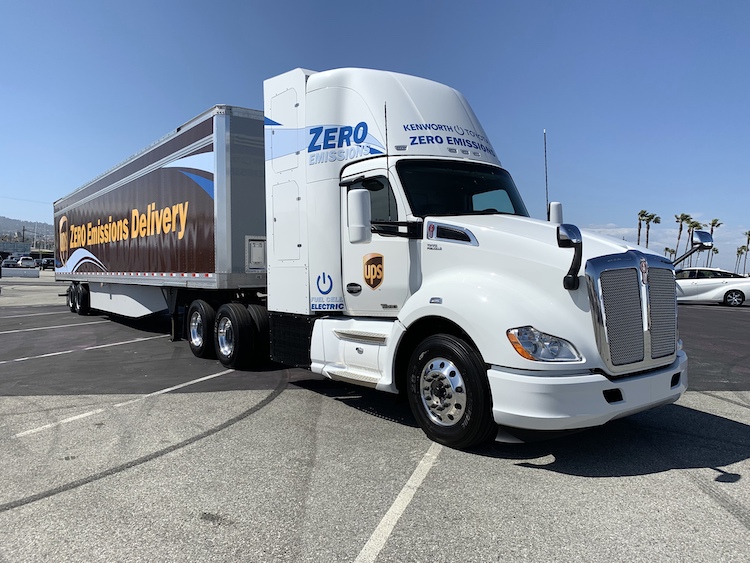 The program (part of CARB’s ZANZEFF, Zero And Near-Zero Emissions Freight Facilities) will deliver 10 Kenworth T680 Class 8 tractors featuring Toyota’s fuel cell technology. Many of the trucks will travel from the two ports to inland distribution centers where much of the freight is transferred to make its way to a final destination via rail or long-haul truck. Program partners include UPS, Total Transportation Services Inc., Southern Counties Express, and Toyota Logistics Services. In addition, some of the trucks will stretch to their 300-mile range heading further inland to Merced in the San Joaquin Valley.

A key part of this program will be the addition of two new large capacity hydrogen refueling stations, one in Wilmington at the port and a second in the distribution area out in Ontario, CA. They join three existing stations to provide a rudimentary network for this new type of fuel and will include a portion of renewable hydrogen. One megawatt-size station at the Toyota Logistics Services facility in the Port of Long Beach uses agricultural waste to generate water, electricity, and hydrogen.

This is the biggest heavy-duty fuel cell initiative ever seen, but Toyota and Kenworth are not the only companies working on FCETs. Nikola Motor Company, a startup based in Phoenix, unveiled its prototype FCET in 2016 and had an updated version this year. The company has announced two things: a multi-billion-dollar fundraising effort, and the purchase of almost 400 acres of Arizona desert, where the company will site it’s factory. It plans to start production this year and be delivering trucks in 2021. Another startup, U.S. Hybrid, has also produced a prototype FCET and demonstrated it in the ports

The challenge is huge. In the Port of Los Angeles/Port of Long Beach terminals, a total of 16,000 trucks currently run. That number is expected to grow to 32,000 by 2030. Both the ports and the state, not to mention local residents, want to see a switch to zero emission trucks. The Toyota-Kenworth FCET could be a contender.