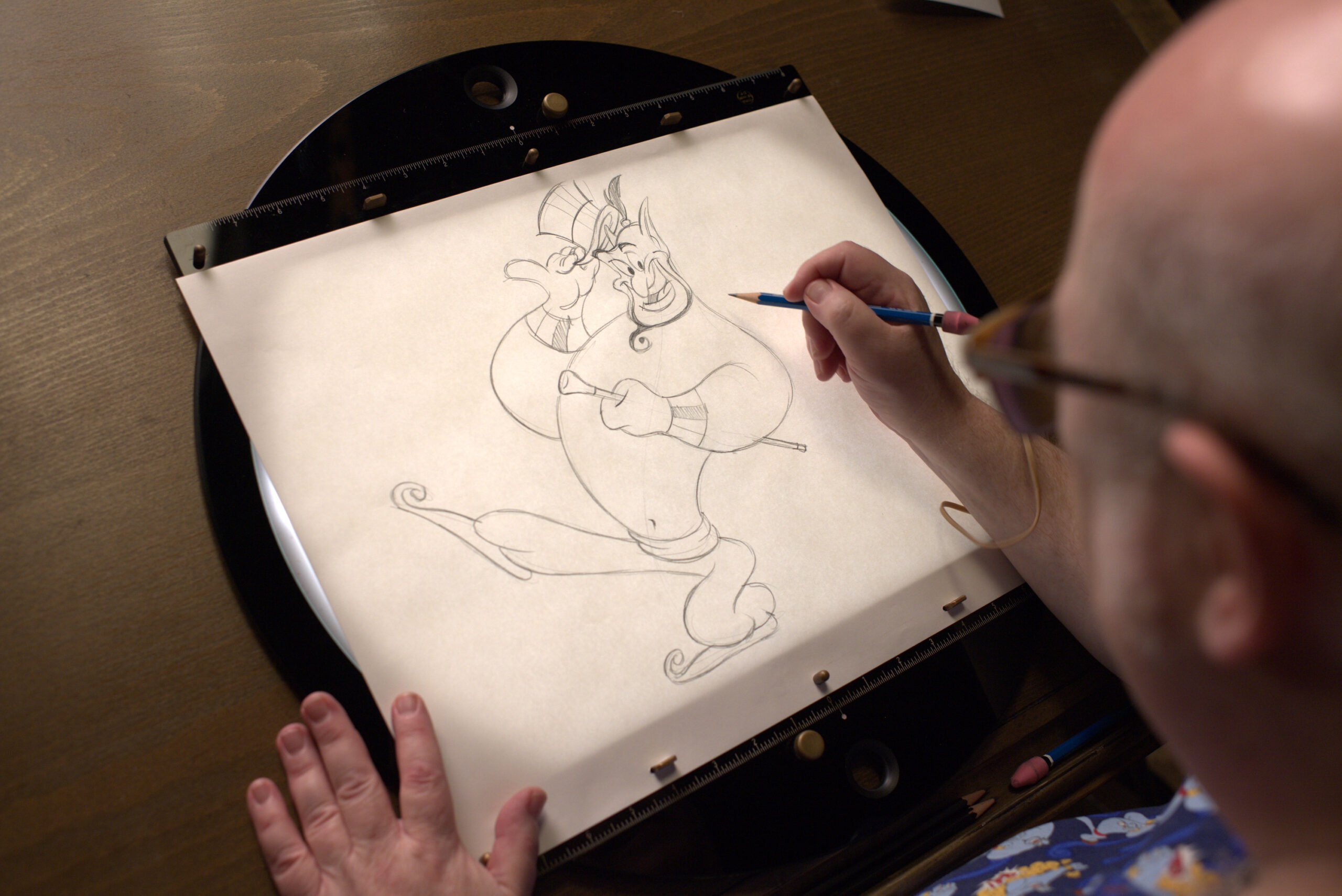 It’s not often we get to see behind the scenes at Disney Animation, but a new series has pulled back the curtain.

The all-new, six-part Original Series “Sketchbook” with Walt Disney Animation Studios begins streaming Wednesday, April 27, 2022, on Disney+. From Supper Club and in partnership with Walt Disney Animation Studios, audiences will be given an insider’s look into the animation process as some of the Studios’ talented artists teach them how to draw beloved Disney characters, including Kuzco from “Emperor’s New Groove,” Olaf from “Frozen,” Genie from “Aladdin,” Captain Hook from “Peter Pan,” Mirabel from “Encanto” and young Simba from “The Lion King.”

An intimate instructional documentary series, “Sketchbook” takes us onto the desks and into the lives of talented artists and animators as they teach us how to draw a single iconic character from a Walt Disney Animation Studios film. Each episode focuses on a single artist illustrating a character that either they helped create or inspired them to want to be an artist at the Studio.

As we learn the steps to drawing these characters, we also discover that the artists each have a unique story to tell about how they made their way to Disney and their chosen character. From the creators of “Chef’s Table,” this exclusive experience will give viewers of all ages a new understanding of how these beloved characters come to life on-screen while introducing them to a new cast of real-life characters along the way.

Eric Goldberg, the creator of the iconic Genie from Aladdin, recently sat down with Innovation & Tech Today to share his story.

Innovation & Tech Today: There was a quote in the very beginning that I really liked. You said for anyone who has a little fear about drawing, just do it. And, and I was wondering, was that a struggle for you early on?

Eric Goldberg: No, I actually started drawing very, very early. Actually, my brother Elliot started me drawing. He taught me how to draw Woody woodpecker when I was four and you know, and I kept it going and he became a journalist. So there you go. <Laugh> I was always comfortable with drawing. I wasn’t always good at it, but I was comfortable with it. And I just got, you know, more and more practiced over the years.

I&T Today: So, you’ve started out with cartoon characters?

I&T Today: Oh, so your first character with Disney was Genie from Aladin. How did the, how did the plan and vision for Genie come together?

EG: Well, first of all, I can’t not talk about John Musker and Ron Clemens who directed it and also wrote the initial script. And I had known John for a while. My wife, Susan, was one of his Cal Arts colleagues. And so she had introduced me a few years before and by the time I got on Aladdin, you know, we were friends and you know, the other person I can’t not mention is Robin Williams. And one of the talents that John and Ron have is to be able to write the script in the voice of the actor they would like to cast. So they gave me the script a week before and said, oh, have a look and see if there’s a character that interests you. And of course, the genie leaps off the page. And I go in and I go, I hope they gimme the Genie. I hope they gimme the Genie. And they say, oh, we’re thinking of you for the Genie. And I’m like, oh, oh, okay. That was great. And, I was so excited. It turns out that I locked myself out of my rental car and they had to call security to break me in.

So, that was my inauspicious start at Disney Animation. But in any event, part of what happened visually was I, you know, in my first couple of weeks there, I was doing designs. And the thing I started thinking about was curved linear drawings because our production designer, Richard Vander, when was doing what I would call Hollywood Arabian, where the S-curves were really exaggerated in the backgrounds and he is doing a beautiful job. And I thought, well, what kinds of characters fit in curvy environments? For curvy characters, I go to my hero, Al Hirschfeld. So, you know, I turned not directly to him, but to his influence, you know? And we started designing the cast in that vein.

I&T Today: Do you ever look back at any of those old drawings and wonder how it would feel if you’d gone with a different style or different genie?

EG: Yeah, I do. I, you know, the nice thing about Genie is that he got paired down to his simplest essence. You know, when, when I was first doing some initial designs, I had genies with, with horns and vests and turbines and, you know, all sorts of things on him. And, and when it finally, the more I paired down all off of him, the better he got the simpler, he got the better he got. So I’ll quote Al Hirschfeld, you know, who said when I don’t have the time, I make a complicated, fussy drawing. When I do have the time, I make a simple one and I’ve always taken that to heart is, you know, it really takes time to get something to its essence, to what that line should be like. And I think you know I always think about him in conjunction with this film in this character.

I&T Today: Oh, wow. So in this episode, you also talked a lot about the role the actor plays in reference, and how involved Robin Williams was with Genie? Do you often get to work with the actor that early on to help mesh your vision with theirs and create this being?

EG: Yes. I mean, you know, often even if I’m not directing the film, you know the directors would have me sit in on the recording sessions, so I’d be able to be there and watch Robin and, and kind of formulate things, you know, and get ideas while I was watching Robin and hearing the takes. Some of those things came thick and fast because it was Robin, and some of those things, you know, kind of worked out the recording sessions. But what was kind of cool is Robin knew I was on his wavelength. It’s like he could do something he’d know I’d pick up on it.

I&T Today: Oh my gosh. You know, I guess I imagine animators as being off-camera people. Was the Sketchbook project something fun for you?

EG: Sketchbook was great and is great. And, you know, one of the toughest things, I think, when you spent your, your career trying to draw naturally and, and relatively spontaneously is to kind of break it down into the steps so people could follow it. You know, it’s a kind of a different animal. But I’ve been on camera before, so that wasn’t uncomfortable for me. And as you can probably tell, you wind me up and, let me go and I won’t shut up.

I&T Today: Well, you’re the perfect guy for this, right.

EG: <Laugh> But yeah, it was a fun shoot and everybody was great. I really hope people enjoy it.

I&T Today: How has how has technology changed your job over the years? I noticed we only see a very simple room with a simple table, paper and a pencil. And I’m wondering as tech changed, how has your day-to-day work changed with it?

EG: You know, tech has changed it. Absolutely. And in most cases changed it for the better. I’ll give you a few rudimentary examples. So, you know, back in the day, drawings used to be inked on cells and painted on the reverse and then put on top of a background. Well, now we can do that digitally. Now, one thing that happened, so we scan our drawings and can paint them digitally then composite them digitally over the backgrounds. One thing that affords us is a million different levels. When you are working with cells, you could only have five levels max, before the picture would start to get gray. You know, so you had a limited amount of space to work with in terms of the number of levels your frame could have. Now it can be infinite because there’s no image loss. Of course, that makes things more complicated too, but it does allow, allow us to do things that we, we couldn’t have done before. And also, I work on a Wacom tablet very, very frequently, you know, for designing, storyboarding, illustration, things like that, that the studio needs. And it’s very, very useful. And I’m very comfortable on it.

I&T Today: But you know, one of the interesting things that one of the reasons this interview excited me so much is I don’t know any animators. I’ve never met anyone who does what you do. It’s almost like this mystical career path. You talked a little bit about it in Sketchbook, but I was wondering, could you tell us a little about how you got your start as an animator?

EG: Sure. When I was a kid, there were all sorts of television shows where people were drawing on camera, you know, and I started to pick that up and enjoyed it. And when I was around six, there was a toy on the market called Flip Shows, where they would take a frame, the frames of a well-known cartoon printed on perforated sheets. And you would take it apart, put it together with a paper fastener and you would have a flipbook. And from that point forward, no memo pad in the house was safe. I started making my own flipbooks. Eventually, when I was 13, I got a Super-8 camera up, but I always loved animation from the earliest age. I always loved its energy — it’s vitality, you know? And, and I knew I wanted to do that, so I started out with the kind of two-page animation thing back in Levittown, Pennsylvania. I used to use our picture window as a lightbox when I was about six and did the two-page animation stuff.