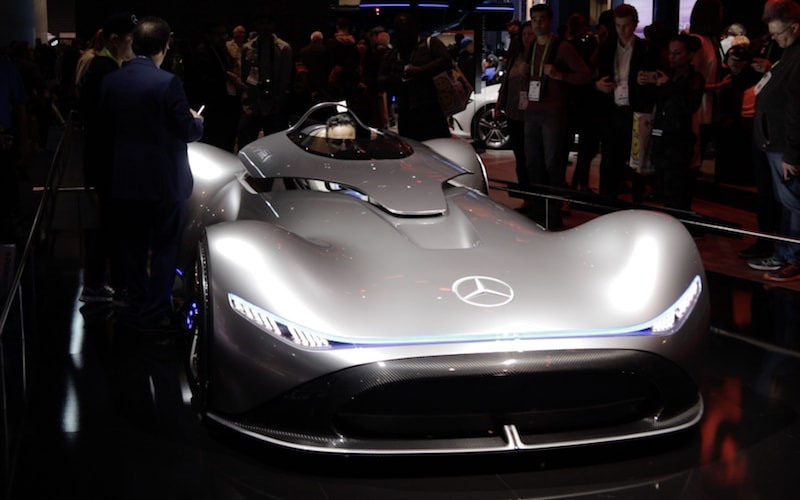 CES is usually one of the most exciting trade shows of the year, but 2019’s show took the cake by showcasing some of the most intriguing concepts we’ve seen in years. So who made an appearance at CES 2019 – and what do these new concepts tell us about the future of automotive technology?

We might not have the flying cars that we were promised in “The Jetsons” or “Back to the Future,” but they might not be as far off as you think. Bell showcased a concept for a flying car – the Nexus Air Taxi – at this year’s CES. This VTOL (“Vertical Take Off and Landing”) vehicle will use a hybrid-electric power system and six fans for flight.

It might look like a glorified drone, but Bell isn’t the only company exploring these VTOLs for on-demand mobility. Volo, Airbus, Uber, and other companies are all working toward making flying taxis a reality in the near future. The overarching trend with most of these flying cars is that you won’t need a pilot’s license, since they’ll mostly be capable of autonomous flight.

Mules and other all-terrain vehicles are a common sight. Honda is working on taking these utility ATVs to the next level by incorporating self-driving and autonomous technology. Built on top of Honda’s existing ATV frame, this new device will be able to navigate, drive itself, and travel nearly anywhere. It’s designed with first responders and search-and-rescue crews in mind. In an emergency, it could be loaded with supplies and sent to the front lines, provide relief, or even drive people out of danger if the situation calls for it.

This is the first time these prototypes have been featured at CES, but a number of them are already being tested in real-world conditions. In Colorado, they’re assisting firefighters. And in California, they’re being used to assist agricultural studies.

Honda isn’t the only one working on projects to help first responders with Search and Rescue. There are some things even an ATV can’t drive over, which is where the Hyundai Elevate comes in. This concept features wheels that are attached to the end of the legs, which enables the vehicle to walk when the situation calls for it. The robotic limbs rely on electric servos to mimic both mammalian and reptilian walking patterns, depending on the terrain.

It’s even possible this technology could carry us to the stars. Hyundai engineers believe that this type of rover could make travel on the surface of planets like Mars easier than ever before. Maybe we’ll see the next Mars rover walking instead of rolling across the surface of the red planet.

Cars that used to be assembled by hand can now be put together by pneumatic robotic arms in a fraction of the time. TDK’s offering for this year’s CES is hoping to take that to the next level with new advances in robotics and sensor technology. One piece that’s extremely exciting to see is the PeizoHapt actuator. This single-layer actuator uses haptic technology to provide a very low response time, making complete robotic assembly that much easier.

Road rage is a huge problem. Some 66 percent of traffic fatalities are directly linked to aggressive driving and road rage. Kia is trying to make drivers calmer with their R.E.A.D. technology. R.E.A.D. stands for “Real-Time Emotion Adaptive Driving.” The futuristic cabin can read your mood by looking at your facial expressions, heart rate, and other bio-signals. If it detects that you’re in a bad mood, it can adjust the interior of the cabin accordingly to try to improve your mood. For instance, the AI system would have the ability to control the A/C components of a car to make the temperature more comfortable for the driver. The AI could also turn on calming music or even turn on the vehicle’s built-in seat massagers!

It might not be the perfect solution to road rage, but it’s an interesting approach to the problem. And it might be nice to have a car that can detect your mood and help you calm down after a hard day at work.

One of the best parts of taking a road trip is spending endless hours gazing out the window at the ever-changing landscape. But for someone who is vision-impaired, a road trip is just a long drive.

Ford’s new “Feel the View” technology, which was featured at CES this year, could change that. Using cameras and smart glass, this tech can generate a tactile representation of what is visible outside the window. You could “see” what’s happening outside your car simply by running your fingers across the window, similar to reading Braille. With most automotive manufacturers working on self-driving cars, this could be a boon for visually impaired individuals who want to maintain their independence.

The Future is Bright

If 2019’s CES is anything to go by, the future of automotive technology is looking bright. It might not be long before we see flying taxis in major cities, or cars that can adjust your radio station depending on your mood.