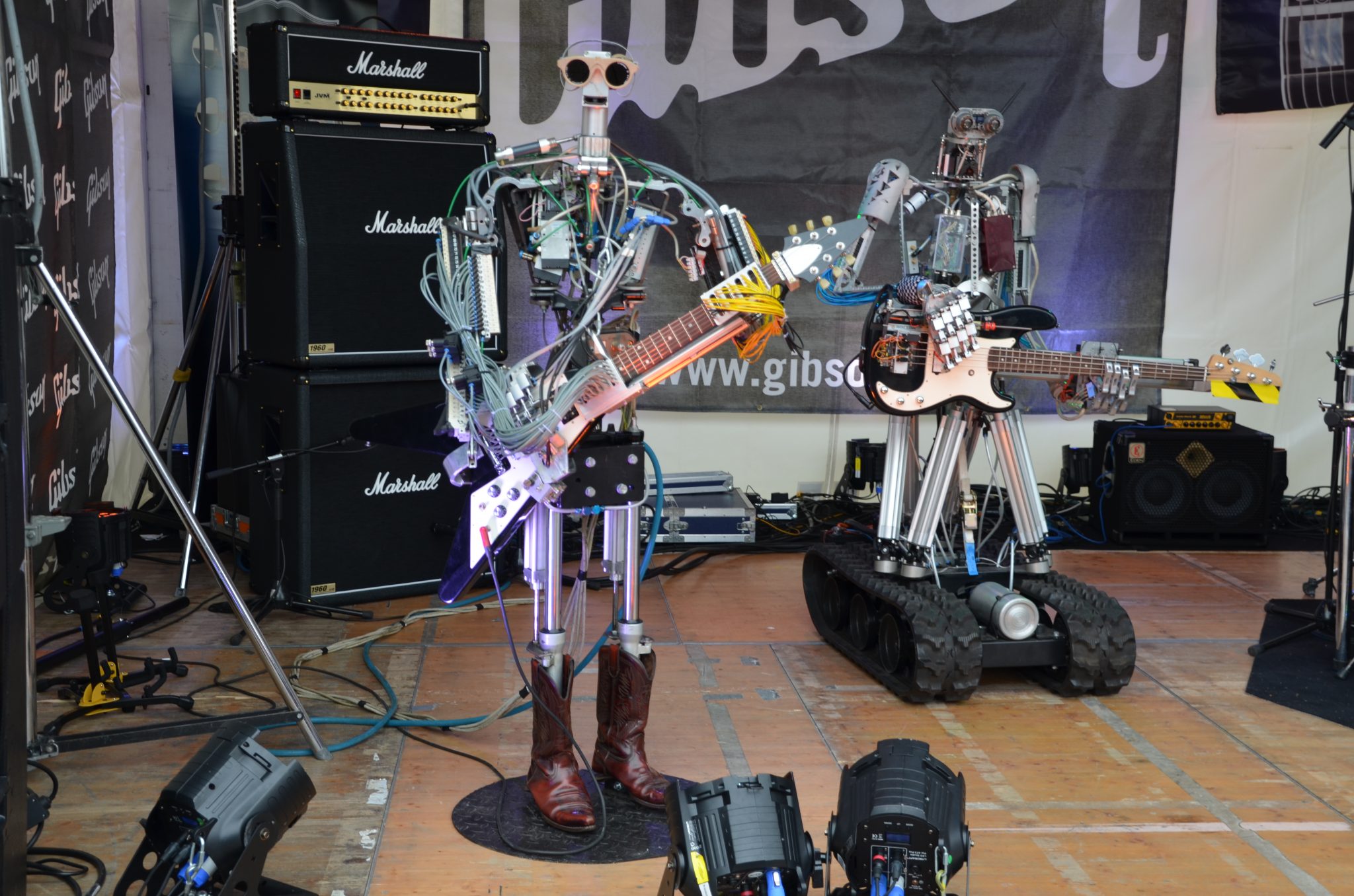 It may be a surprise for music fans who enjoy the predominantly human profession of singing and instrumentation to discover the very real surge in robotic performers. Partially-automated music-making machines have been around for years. A few examples are Ray Kurzweil’s pattern recognition software and Martin Molin’s incredible Wintergatan Marble Machine. Automated live musicians are a different thing altogether and are a fairly new innovation.

Like humans, some of these performers are more adept than others, but the top tier robot musicians are now equipped with some skills humans could only dream of obtaining. How about a robot guitarist capable of memorizing thousands of songs in ten minutes, then having the ability to perfectly execute the performance of them all on a live guitar, on command? Yes, that already exists. How about a robot with the same skill on bass? Check. Drums? That exists too. The only traditional four-piece ensemble skill robots have yet to master (depending on one’s definition of mastery) is vocal performance. German-based all-robot band Compressorhead aims to solve even that issue.

Compressorhead is a quartet of robots, powered by electro-pneumatic action (air pressure controlled by electric currents) and programed by MIDI input. The band’s construction dates back to 2007, though their first official performance didn’t take place until 2013. Since then the band has gathered notable momentum, with performances of heavy metal classics like “Ace of Spades,” “Iron Man,” “T.N.T.,” “Blitzkrieg Bop,” and “Rock and Roll.” A Youtube video of the band performing Motorhead’s “Ace of Spades” currently has 7,139,183 views.

Compressorhead boasts an impressive line-up. Fingers is the guitarist, a fitting name considering the 78 fingers it has that enable it to perform extremely fast and accurate fretting on its Gibson Flying V, which is routed through a Marshall JVM amp head driving two 1960 Lead Cabs. Bones is the two-handed, four-fingered bassist, playing a Fender Precision bass. Stickboy is the percussionist, with four arms and two legs that can handle up to fourteen percussion instrument pieces. Stickboy Junior is a separate robot developed to assist Stickboy with the operation of the hi-hat.

All of the bands performances are currently instrumental, however, because the band has no vocalist. This might salvage some musically competitive pride for “meatbags” (the term Compressorhead uses for humans) – just not for long.

The Trons are a New Zealand based robot band that operates off a computer salvaged from a vending machine. The band features a rudimentary vocalist that can produce basic sounds, though because they are so basic it’s up for debate among performance theorists whether this band-member is, in fact, a robot “vocalist” or just another instrument. For a more solid example, one could turn to Japanese based robot band Z-Machines. The Z-Machines feature a relatively versatile vocalist with a wide repertoire of sounds and songs. In this way (and in a few other ways) Z-Machines surpass the abilities of Compressorhead. But the band’s vocalist still sounds nothing like the melodic performances meatbags have been honing for centuries.

Can Compressorhead solve this dilemma? The band has launched a Kickstarter campaign to raise more than $290,000 for the construction of a robot that can sing. The plans are for the singer include the capability to react to and engage with the audience. If the campaign is successful, Compressorhead plans to record a 14 track album of compositions by John Wright. Whether this campaign is successful or not, one question still remains: Can a robot be designed to satisfactorily sing meatbag lyrics with meatbag melodies? And if so, how much longer will human musicians be relevant?