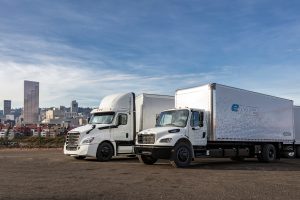 Daimler’s Ramping Up Deployment of its Electric Models

While headlines have showcased a dip in the light-duty car sector, big trucks, commercial vehicles, over-the-road, and short-haul semis have seen a surge in recent technology deployments.

While the freight sector has not been hit as hard by the pandemic, freight volume did drop early in the year but appeared to bounce back in May and is predicted to return to pre-COVID-19 levels.

The big boys in the sector—Daimler Trucks, Volvo Group and PACCAR—are putting zero emission Class 8 semis into operation with customers. Newcomers to the group like Tesla, Nikola, HyLiion, and Hyundai, put down markers to create positive headlines and interest more than any other part of the automotive world.

A California regulation is at the core of these activities. As part of the state’s push for zero emission vehicles, late last month it passed the Advanced Clean Truck rule, the first regulation anywhere mandating that truck manufacturers would have to offer zero emission trucks as a percentage of their total truck offerings in the state starting in 2024. The state is working on a companion regulation that will require fleets to purchase an increasing percentage of these trucks. 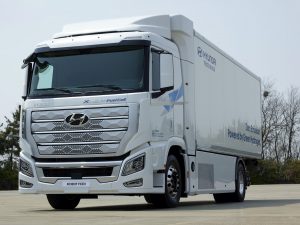 A Month of Big Action

Daimler Trucks North America ramped up the number of its electric trucks in operation in California. It’s up to three dozen eCascadia and eM2 trucks in service and plans to start customer sales late next year.

Volvo Group North America finally put its first electric truck into service in California, after having to wait to have the charging stations hooked up by the local utility. (Volvo had five battery electric trucks ready to go, waiting for a plug).

Daimler and Volvo said they were going to work together to scale up fuel cell technology for over-the-road trucks. 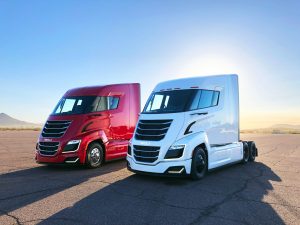 Tesla’s CEO Elon Musk emailed employees that it was time to get the Semi to “volume production.” When first shown publicly in 2017, Musk said the Semi would be in production in 2019, a date he later moved to 2021. He hasn’t said where it would be produced or where the batteries would be made.

Hyundai shipped 10 fuel cell electric semis to Switzerland to begin operations there. Hyundai said it will roll out 50 trucks this year and a total of 1,600 units by 2025.

Start-up Nikola, another fuel cell player, went public with much hoopla around its plan to design and build not only Class 8 fuel cell trucks, but also a hydrogen refueling infrastructure to allow them to cross the country.

HyLiion, another recent entrant in the electric truck business, announced a 1,000-truck order from Agility, a logistics company, which also invested in HyLiion. Its Hypertruck ERX Class 8 trucks retrofit an electric-natural gas drivetrain into a glider (a truck with no engine). The electric motor drives the wheels while the natural gas generator charges the batteries.

Another technology advancement came from TuSimple, an autonomous truck developer. Partnering with UPS and other major trucking 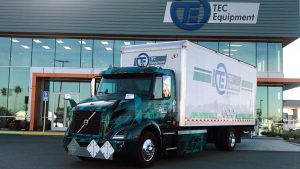 Volvo Finally Got a Plug for Its Electric Truck

players, the company began operation of its autonomous trucks on routes between Arizona and Texas, a big step forward for that technology. Safety drivers are still in the cab, but the company believes that will be a short-term arrangement.

In addition to CARB’s ACT rule, the EPA-led West Coast Collaborative and major utilities up and down the Pacific Coast announced a highway project designed to supply first MD and then HD electric truck charging.

The commercial truck market is accelerating its move into zero emission technology. If all this has happened in one month, imagine where this part of the transportation industry will be in a year or two.