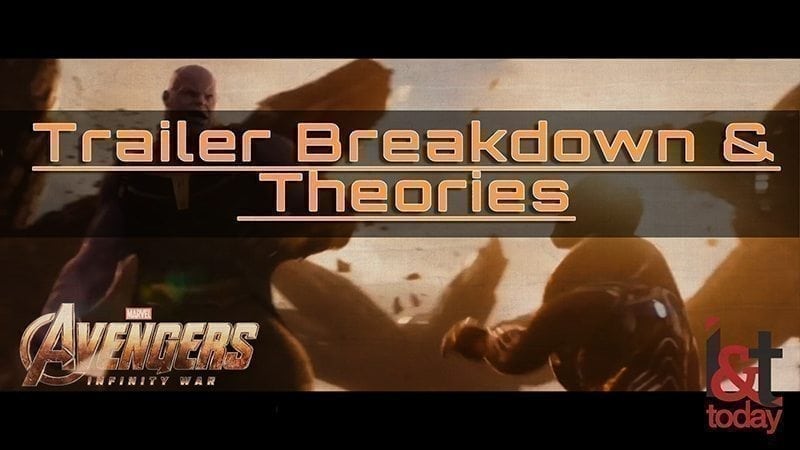 The Avengers: Infinity War trailer dropped yesterday morning, and while the film is still over five months away, the hype is building fast. Obviously, there was a lot of excitement around the office, so we chose to channel that into a productive near-3-hour analysis of the trailer. We found that this mere 2-minute, 24-second trailer may actually reveal a lot.

Firstly we get confirmation that many of our beloved superheroes will make an appearance in the film: everybody from the Avengers squad, the Guardians of the Galaxy, Black Panther, and Spider-Man. Missing from the trailer, however, are Ant-Man and Hawkeye, and it’s unclear why they didn’t appear. Maybe Marvel has big plans for those characters that they don’t want to reveal just yet. Or, in a worse case scenario, they don’t play a significant role in the film, which would be a shame, as both characters have become fan favorites.

The trailer also provides our first look at Thanos in action. While the years-in-the-making antagonist has an impressive entrance, many people are bothered by one of his accessories, or lack thereof. While the focus around Thanos has long been the Infinity Gauntlet, many viewers were disturbed regarding his lack of helmet, revealing his shiny chrome-dome. Like many classic comic book characters, Thanos has long donned a helmet, leaving fans confused as to why Marvel has chosen to remove it.

Regardless, it’s safe to say that this major blockbuster film will feature new team-ups, settings, and probably a few laughs. And, while this will likely be the most hyped Marvel movie yet (since we first saw Thanos over five years ago), with Marvel’s impressive track record, it’s safe to assume that they will deliver.

And so, without further ado, here is our breakdown of the latest trailer, featuring some of our own theories and poorly timed jokes.