Autonomy is hard to describe when not attributed to humans. It’s equally hard to problem-shoot. With the rise of the autonomous vehicles, manufacturers, government officials, and potential owners alike face a litany of new problems to solve. While some of the solutions are still up in the air, it’s worth laying an informational foundation to better understand what kind of issues the autonomous vehicle industry will face in the future.

The Problem with Weather

It’s the weather, as much as any connectivity or security issue, that could compromise the effectiveness of autonomous cars. At this point, there are automatic features in place designed to protect drivers from snowy weather and icy roads, like automatic brakes.

As autonomous cars develop, though, they’ll need to be able to perceive lane dividers beneath layers of snow and to respond to on-going weather changes as quickly – if not more so – than a human driver would.

Nowadays, self-driving cars get confused when confronted with a puddle on the road. It’ll take improved imaging technology to ensure that motorists can enjoy autonomous cars in all sorts of weather. 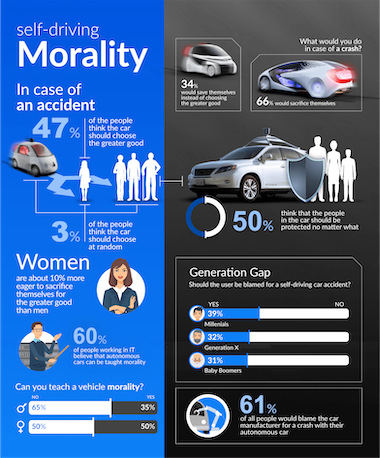 The Intricacies of Snap Decisions

Similarly, drivers need to have quick reflexes to respond to changes in their environment.

While autonomous cars can stop when something goes wrong with their infrastructure, they may not be able to respond to external stimuli as quickly. For example, if a child runs into the street, an autonomous car needs to decide instantly whether it puts this child or its passengers at risk. Furthermore, autonomous cars need to be able to differentiate between debris in the road and other humans before they’re safe to take out on the motorway.

At this point in time, 58% of road users surveyed don’t believe that autonomous cars can be taught morality. As a result, these cars might indiscriminately put people at risk when making snap decisions.

With greater interconnectivity comes greater responsibility. The self-driving cars of the future will likely be connected to the Internet of Things. Why? Because the IoT will be able to feed an autonomous car information about its surroundings. 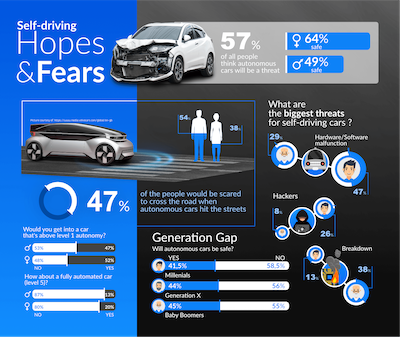 This kind of interaction requires as much smarter infrastructure – in the form of street signs, lane markers, and so on – as it does a car-based computer that’s capable of learning about its surroundings.

Such connectivity opens a car up to significant security risks, though, if the data it shares with its surrounding smart infrastructure isn’t effectively encrypted. The accessibility of IoT clouds, while convenient, is forcing a number of industry leaders to develop new security features that will keep more than just the cars of the future safe. Any sort of shared network needs to be secure to be used to its greatest potential.

When there’s no actual person behind the wheel of a car, it grows difficult to assign blame in the case of an accident. While the autonomous cars of the future will likely be coded with road legalities in mind, machines – and those who operate them – can still make mistakes.

When it comes to the at-fault status of an autonomous car that gets in an accident, a recent study shows that road users’ opinions vary: 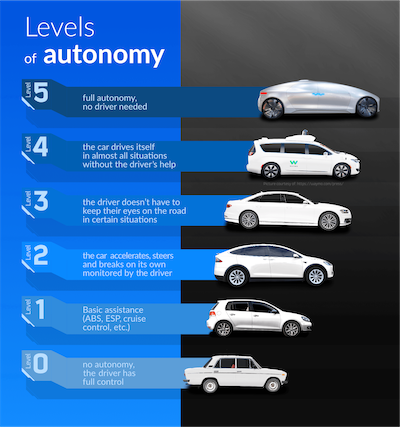 This divide highlights the issue of legality that autonomous car manufacturers and owners face. It remains unclear who would take the blame in an accident. The recent accidents involving autonomous cars suggest that humanity’s tolerance for machinated mistakes is significantly lower than that for human mistakes. If this continues to be the case, future legislation may have to grapple with ways to condemn the mistakes of a non-human entity.

Similarly, there is the issue of control when operating an autonomous car. As the level of autonomy increases, who is really in control of the vehicle in question? Human drivers are allowed to make mistakes while driving. In some cases, this means slight flexibility in the speed limit. In others, it means offering different car insurance rates for drivers who are error-prone versus through who have a clean record.

How will those sorts of flexibilities be addressed in an autonomous future? Whose history will come into question when determining a car insurance rate – the owner’s or the manufacturer’s? Like accident blame, these questions make note of the captain-less nature of autonomous vehicles.

If self-driving cars are the future, there’s a chance that the system through which automobile legalities and industries operate will have to transform to better interact with coded sentience.

All graphics courtesy of https://www.oponeo.co.uk/tyre-article/what-europeans-actually-think-of-autonomous-cars