A lot can happen in just half of a decade: the Earth travels around the sun five times, Presidents go in and out of office, inventions are debuted and soon forgotten, and one magazine can turn into a movement. When Innovation & Tech Today first debuted in 2015, the mission was to celebrate innovation across a number of industries, bringing about a national discussion focused on the unprecedented pace at which we are moving – and these are unprecedented times.

With climate change, pandemics, anti-vaxxers, and much more, the last five years have seemed overwhelming, insurmountable even. But rather than shy away from these issues, or be discouraged by them, we at Innovation & Tech Today strove to break through them and face them head-on.

Mr. Rogers famously said: “When I was a boy and I would see scary things in the news, my mother would say to me, ‘Look for the helpers. You will always find people who are helping.'” We’ve adapted this idea. When facing the overwhelming problems of today, we’ve opted to look for the innovators. 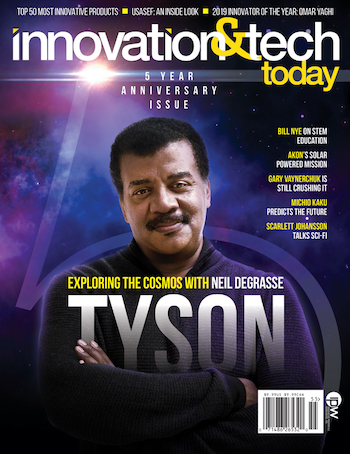 Now, with our five-year anniversary issue, we’re taking a look back at some of the most impressive innovators we’ve had the pleasure of speaking with, including:

Each of these people have innovated their industry (and by extension, the world) in one way or another. Whether it be Scarlett Johansson’s prolific acting career or Bill Nye’s science communication, these people have played integral roles in advancing our society.

To top off this trip down memory lane, we’re featuring exclusive interviews with Neil deGrasse Tyson and Ann Druyan about the most recent season of Cosmos: Possible Worlds on National Geographic.

And of course, this issue also has everything you’ve come to expect from Innovation & Tech Today, including engaging departments and our Top 50 Most Innovative Products of 2019.

You can read the 5 Year Anniversary Issue of Innovation & Tech Today right here!