Trump’s prolific tweeting sets him apart in our presidential pantheon. As Twitter posts losses year after year, Trump seems hellbent on keeping it in business all by himself, as he continues to be one of the most well-known tweeters.

For someone as busy as the president, you have to wonder: how much of his time is taken up by this tweeting? More importantly, how much of Mr. Trump’s time will be taken up by tweeting over the course of his term? We set out to answer this question. The following research is by no means exhaustive, but it’s certainly enough to give a ballpark estimate.

First, we counted all of the tweets Trump posted between March 1 and March 18, not including retweets, and found that Trump has tweeted 69 times, with each tweet averaging 82.7 characters. 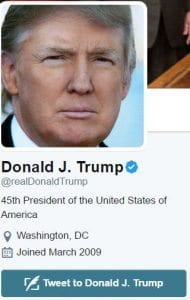 Some in-house experimentation allowed us to estimate how long it takes to type that many characters on a phone. Including correcting mistakes, we determined this to take about 35 seconds. (We should add that our time estimate is nearly identical to a 2007 study conducted by Guido Nottbusch, Rüdiger Weingarten, and Said Sahel originally published in Writing and Cognition: Research and Applications. This study found that people type an average of 2.44 characters per second, or 82.7 characters in 33.9 seconds.)

Next, we wanted to see how long Trump spends typing those tweets each day. We calculated that 69 tweets spread over 18 days comes to an average of 4 tweets per day. Multiply the amount of time Trump spends typing those 82.7 characters (35 seconds) by 4 tweets per day, and it comes to 140 seconds – about 2.3 minutes – per day just typing his tweets.

Finally, based on an online survey by Cowen and Company, we know that the average time spent by users aged 60+ browsing Twitter is just over 13 minutes. Assuming this is true for Trump (and, indeed, his numerous retweets confirm that Trump’s time on Twitter isn’t restricted to composition), we combined browsing time with typing time to determine that he spends an average of 15 minutes and 20 seconds each day tweeting.

That adds up to approximately 22,249 minutes tweeting. That’s 370.8 hours, or just over 15 days. That’s right. Assuming Trump serves the full four years, and that he continues tweeting at his current pace, he will spend two weeks sharing his thoughts on Twitter.

Even though Trump has claimed he will eventually give his salary to charity, we can also figure out that over the course of four years he will make $16,438 just by tweeting. In other words, Trump earns well above the poverty line for a two-person family in the U.S. (2015 is the last year for which data is available from the U.S. Census Bureau). 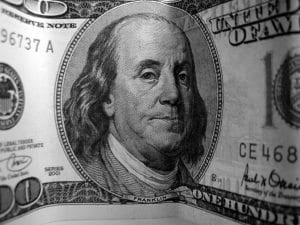 We have to say that Trump likely spends most of his time on Twitter each day doing more than just typing and browsing. He probably spends time thinking about each tweet: reading outside articles, planning, thinking, drafting, etc. As a result, this calculation of ours is highly speculative. The best estimate we can find is an analysis by Philip Bump for The Boston Globe. Bump estimates that the composition and drafting of Trump’s tweets takes around eight minutes and 20 seconds – based on the lag that occurs between strings of Trump content broken up over several tweets.

Extrapolate that calculation over Trump’s 1,451-day presidency and the commander-in-chief will spend 49.5 days tweeting, earning him approximately $54,246 just from his time spent on the site – nearly the median household income.

Of course, it’s important to keep two things in mind. First, Trump isn’t the only president to use social media; Barack Obama also had a presidential Twitter account, with comparatively infrequent spurts from month to month. However, Trump stands out because he seems to handle most of his tweets himself. Second, these numbers should not be taken as absolute truth. They are, at best, a good approximation. No matter how you look at it though, that’s a lot of tweeting.

To see our calculations, please view our compilation of Trump’s tweets and accompanying spreadsheet.

How to Optimize Your LinkedIn Profile, According to Josh Steimle, Author of '60 Days to LinkedIn Mastery'