Radio host Travis Rodgers knows a thing or two about broadcasting. In addition to producing the extremely popular Jim Rome Show for years, Rodgers went solo for the Yahoo! Sports Radio show Travis Rodgers Now, which took a lighthearted look at the ludicrous nature of sports culture. Currently doing pre-game and post-game analysis for the L.A. Rams and Lakers, Travis Rodgers spoke to me about his time on the Jim Rome Show, the future of broadcasting, and one of his favorite topics: O.J. Simpson.

Innovation & Tech Today: What originally inspired you to get into broadcasting?

Travis Rodgers: Ever since I was really young I was fascinated with sports and I wanted, at first like most kids, to be a participant. I wanted to play Center Fielder for the Dodgers. But that didn’t work out the way I was hoping. [laughs] So this is just another way to stay in it and get to be around sports and the games and athletes and the stories surrounding athletes, I always found those to be incredibly interesting. And that was the main reason. The second reason was I really wasn’t very good at anything else. So that’s kind of where I landed, I just enjoyed being around sports as much as I did.

I&T Today: Was there one broadcaster or host in general that gave you that inspiration?

TR: I’m incredibly lucky in the sense that I grew up in LA in the 70s and 80s where the local broadcasters were Chick Hearn, Vin Scully, Bob Miller with the Kings. And these guys are all in the Hall Of Fame, and in Vin Scully and Chick Hearn’s case, arguably the greatest MLB voice of all time, arguably the greatest NBA voice of all time. So, just growing up and watching games on TV and listening to them on the radio here, you were subjected to what you thought was “oh, this is how everybody must sound. They weren’t. They were Vin Scully, Bob Miller, and Check Hern. So you get to listen to these and you realize “oh my gosh, this makes such a huge difference when you have these legends doing it.” And when I first got into it I thought that I wanted to do play-by-play. And then once I got started in broadcasting my career kind of took a different path at that point. But those were the guys I grew up listening to and I knew, by the time I was in high school, I noticed those were the guys that were really, really good at it. And I got an opportunity to listen to them almost literally every day. So those were the guys I certainly listened to the most. They’re play-by-play guys and I really never have been. So the style is a little different. But I certainly kind of honed my ear listening to those guys.

I&T Today: With Travis Rodgers Now, you did a great job of pointing out the absurdities of sports culture. Did you always see these absurdities or was it something you saw throughout your broadcasting career?

TR: No, I’ve always kind of liked the nonsense that’s in sports. It’s fun to watch a game and talk about Tom Brady or whatever. But quite frankly I don’t have any great insights into that that nobody else does. I mean, professionally the way information is available to everybody else, everyone gets to see everything. Everyone has access to the statistics. I just kind of realized the things that interested me most were “hey did you see this” and “what in the world was this?” So I always enjoyed kind of the goofier side of it. When I was working for Jim Rome, that’s kind of where I cut my teeth as far as figuring out how to present these stories, and I would find them, present them to Jim, then use them. And when I went out on my own I decided me telling someone the Dodgers lost to the Rockies doesn’t do me any good. Who cares? Everybody knows that already. I have to find something I can make light of, or maybe point out a specific moment that maybe someone didn’t see, and the goofiness, the nonsense. Sports is filled with goofy guys. That’s where I decided to focus.

I&T Today: You mentioned when you used to work with Jim Rome, do you have any interesting stories from those days?

TR: Well, I was there  a long time. I was there almost fifteen years so there was a lot of moments that were a lot of fun. The vast majority of the time I was there was very positive and just a whole lot of fun. I learned a lot from Jim, I learned how to prepare, I learned how to get ready to do a show, I learned how to hire people that you wanted to have working on your show and the kind of people you want working on your shows. Most of the day, Jim’s work ethic was extraordinary. And I realize it wasn’t a mistake, him having the biggest show, the most popular show, the most profitable show for a very long time was not just because he got lucky. It’s because he worked at it. And that was kind of the biggest thing I took from my experience there.

I&T Today: Do you still keep in touch with Jim?

TR: No, I haven’t talked to him in a really long time. I’ll steal a line, I wish I could take credit, whoever said this first, “if things didn’t end badly then they wouldn’t end.”This came to an end so we haven’t talked to each other in a long time.

I&T Today: Travis Rodgers Now definitely didn’t fit into that mainstream mold, with much more pop culture talk and fascination with the O.J. case. Do you believe that’s because you were very honest with your radio persona?

I&T Today: Talk radio was generally thought to be caller driven. However, modern podcasting and your previous show barely utilized live calls at all. Why do you believe that is?

TR: Well, I think that, and I’d hate to paint with a broad brush, but most callers don’t have anything interesting to day. They just want to say what they want to say. They want to give you their opinion, the majority of the time, they don’t have anything interesting to say, it’s just a recitation of something you’ve heard already or it’s poorly constructed. So phone calls to me are really difficult, you’re gonna have to take ten phone calls to get one that’s mediocre. Whereas if you interact with your audience, sometimes you have to interact with your audience, but if you can control the interaction a little bit more effectively, whether it’s through Twitter or whatever. And, really, the reason I always liked Twitter on my show is Twitter’s brief. You have to write a brief thought or a quick joke. It has to be tight, it has to be ready to go. That forced brevity forces people to get their act together and I think that’s a much more effective way to interact. I hear people call, if it’s somebody I’m watching or listening to) and the second they start taking calls, I bounce. I go to someone else.

I&T Today: I think Sandy would have been the exception for Travis Rodgers Now.

TR: [laughs] Yeah, well he’s kind of the outlier. He’s the exception that proves the rule. Because he was so wonderfully crazy, you just never knew what he was going to say. He wasn’t listening at all. He was just giving his random baseball scores. So I miss Sandy a little bit. I’ve gotta be honest.

I&T Today: Have you heard from him since then?

TR: I haven’t. A lot of people think Sandy was a character I put on. I was like “guys, I’ve got bad news for you. I’m not nearly that funny or that creative. I could never do that.” So no, I haven’t heard from him. I’ve heard from a bunch guys that were pretty regular listeners of the show through Twitter and whatnot. But not Sandy.

I&T Today: You’ve got experience with traditional talk radio and podcasting alike. Where do you believe the medium is going? 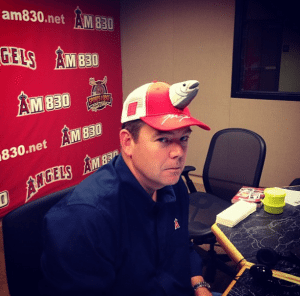 TR: That’s a great question, and if I had a short, tight answer for it I would not be doing what I’m doing. I don’t know. I don’t think anybody knows. I think that there will always be talk radio, I think it’s a format that’s proved itself to be very popular, very effective. But I will say this, I do think that podcasting is coming on fast. I’ll use myself as an example, I was somebody who listened to a podcast occasionally. And almost only when somebody would say to me “you’ve got to listen to this.” In the last six months, I’ve listened to a ton of them. I really like them. They’re very intimate, you can connect directly with your audience. The problem with podcasting is trying to find a way to make a buck on it. And, unless you find a massive audience, it’s very difficult to do. They’re time consuming to put together. So it’s a little bit of a balancing act to figure out how much to put into this and take away from whatever else it is I might be doing to try to make a living. Because I want to do a podcast, but I don’t know how to make any money off a podcast. That’s where it gets a bit tricky for I think the 90-some-odd percent of people doing podcasts.

I&T Today: Absolutely. And because it’s so easy to upload, there’s so many out there, it’s probably just tough to stand out overall.

I&T Today: What’s your next move? Do you have anything planned?

TR: Football season’s right around the corner, I do pre and post and a lot of the Rams coverage on ESPN LA as well. So I’ll be back doing that before too long. I’m gonna fill in and do some talk format stuff on ESPN LA as well coming up here in the next few months as football season kicks off. That’s the plan. I really enjoy working for ESPN. They’ve been fantastic to me. I like the people I work with, I like the people I work for. I hope to stay there for a really long time.

I&T Today: What did you think of O.J. Made In America, especially with the fact that he might be get out here pretty soon?

TR: Yeah, we’re getting closer. I thought the documentary was fantastic. It was a little long for my tastes, I mean I thought that it was great. I don’t know how many hours it was, eight or nine hours, if it was half that much I still would have thought it was fantastic. But I watched every minute of it and it was great. Especially the stuff at the end where, we all know the story of O.J. up to the trial and then the subsequent acquittal. But what happened after that, prior to getting thrown in jail in Nevada, I don’t think a lot of people did know that. Man, he was out there. I thought that was the most interesting part.