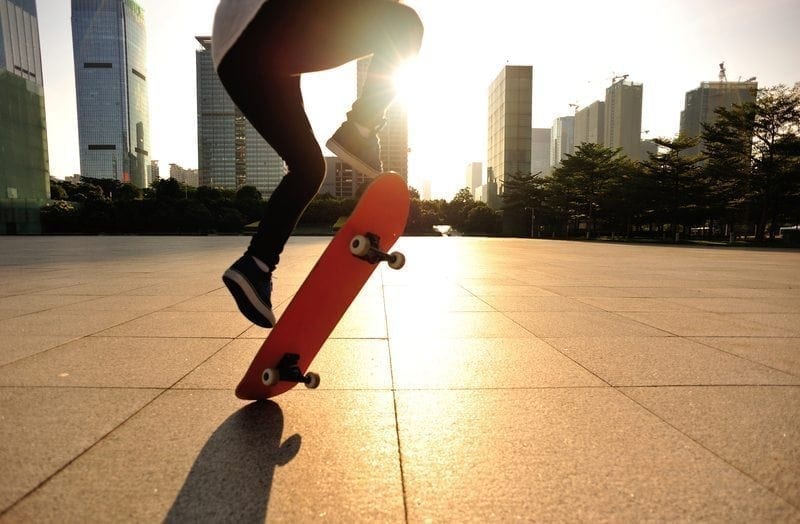 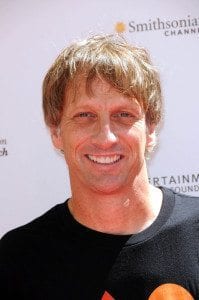 These days, Tony Hawk is helping Mini Cooper sell Countryman family cars. Generations of today’s parents have grown up watching Hawk revolutionize the sport of skateboarding and playing video games he helped design. Activision and developer Robomodo have Tony Hawk’s Pro Skater 5 on store shelves now – the first new Pro Skater game in 13 years, and the first game for today’s PlayStation 4 and Xbox One gamers. It’s also the first game in which players can choose to play as Tony Hawk or as his son, Riley.

“It’s not nepotism,” said Hawk. “He definitely deserves to be in the game. He earned it. And to be honest, I was surprised that he agreed to do it. The request did not come from me. The request came from elsewhere, and I said, ‘Hey, they asked if you wanted to be in the new game,’ and he said, ‘Yeah, it sounds like fun.’ And I was like, ‘Wow.’”

Like his father, Riley went through the entire process of having his body and head scanned for the game. “It definitely looks like him,” said Hawk. “He’s got the hair and the tattoos, but he looks younger. He doesn’t look as old as he is.”

Other skaters featured in the game include Nyjah Huston, Aaron “Jaws” Homoki, Ishod Wair, Leticia Bufoni, Chris Cole, David Gonzalez, Andrew Reynolds, and Lizzie Armanto. These athletes compete in the X-Games and other events. Back in the day, Hawk helped ESPN launch the X-Games and turn it into a global event that helped extreme sports reach the main-stream.

“It’s fine with me that eSports is part of X-Games,” said Hawk. “I think it’s cool. Online gaming is more popular than skateboarding for the most part, so why not? And then have the best players rise to the top. It’s fascinating to me that you can make a career being good at video games. It’s fascinating that you can make a career at skateboarding. When I was a kid, I just did it because I loved it.”

There are similarities between the rise of eSports – which today has 260 million fans around the globe – and the path that skate-boarding took in the early days before X-Games gave a broadcast window to an underground sport.

“I see that maybe the gamers are striving for legitimacy and acceptance in the mainstream because most parents or elders you tell that you’re going to make a career at being the best video gamer, that doesn’t seem something tangible to them,” said Hawk. “That definitely was the case when I was skating when I was growing up. If you told your mom or dad that you wanted to go be a pro skater they’re like, ‘What are you going to do for a job, though?’”

One of Hawk’s jobs is still making video games. He said he’s involved in every step of the development process, and he plays each ‘build’ of the game as the developer progresses. The new game introduces a seamless online multiplayer world to explore.

“The new online mode allows up to 20 players at a time,” said Hawk. “You can have friends playing from all across the world and you can create your own parks and share them. We have some of the favorite classic levels that we’ve brought back, and we’ve created new ones. But the controls remain the same that people are used to.”

Everything players could do alone in Tony Hawk’s Pro Skater 4 they can now do with friends online. As for Hawk, he finds himself logging more time playing kids games when he does have some free time.

“Mostly I’m playing games with my daughter,” said Hawk. “We play Disney Infinity together because she likes to play the character she sees in the movies. I used to play all the LEGO games with my kids because they wanted me to finish the hard levels, but now my kids are off on their own. They’re playing Destiny and Minecraft 24/7. That’s our house.”

Hawk believes the timing is right to bring back the fan-favorite Tony Hawk’s Pro Skater because there’s such a nostalgic element. Fans have been asking him to bring this franchise back for years.

“With all the new consoles in place we just felt like it was time to bring back that old gameplay, that old control scheme, but in the new environments and using the new technology,” said Hawk. “I’m excited because I’ve been waiting, too.”

That wait is finally over.