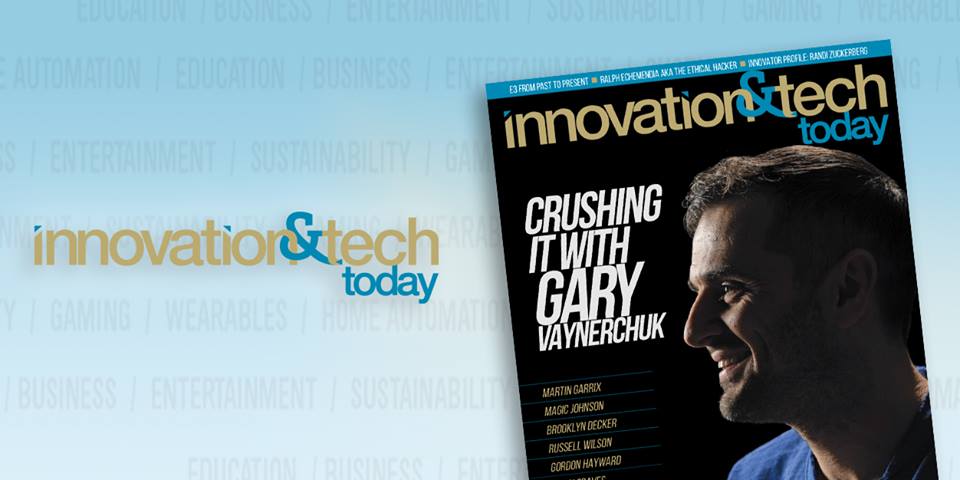 The wait is over! The brand new issue of Innovation & Tech Today, featuring Gary Vaynerchuk on the cover, is officially out on newsstands. Kick off your summer the right way by checking out Vaynerchuk’s views on entrepreneurship, cryptocurrency, and the art of “crushing it.”

In addition to our in-depth conversation with Gary Vaynerchuk, the summer edition features NBA Hall of Famer and entrepreneur Magic Johnson, who discusses his new interest in the world of esports as well as his work with the diversity-focused company Jopwell. And, speaking of athletes, our Outdoor + Adventure Tech section features Super Bowl-winning quarterback Russell Wilson, who discusses his work with the startup company TraceMe. Boston Celtics star Gordon Hayward also makes an appearance in the issue, offering his insights on the world of competitive gaming. And, discussing her brand new environmentally friendly swimwear, kiteboarder Sensi Graves highlights the issue’s Sustainability Today section.

As the issue debuted at E3, there is plenty of entertaining content highlighting the Gaming + Entertainment section. One major spotlight is the featured interview with DJ Martin Garrix, originally conducted at the X Games in Aspen, CO. Aubrey Joseph and Olivia Holt, stars of Marvel’s new series Cloak and Dagger, opened up about portraying modern versions of the classic comic book characters. The new edition also features plenty of video game content, including a full timeline of the best and worst of E3 as well as a look at upcoming releases such as Rise of the Tomb Raider and Call of Duty: Black Ops 4.

This issue’s Women In Tech feature highlights Brooklyn Decker and Whitney Casey, who discuss their innovative wardrobe app Finery. Additionally, this edition’s Innovator Profile section features Randi Zuckerberg discussing her new book and tips on living a balanced lifestyle. Along with the amazing personalities featured in the issue, there is no shortage of insightful articles, such as a look at the effect David Letterman’s retirement had on Trump’s election, an overview of blockchain security, and an extended feature on California’s tech community. And, to cap the latest and greatest issue of Innovation & Tech Today, comedian Adam Cayton-Holland offers his lighthearted take on the evils of social media.

Make sure to check out the issue at Barnes & Noble or subscribe online. Happy reading!