When Disney acquired George Lucas’ Star Wars empire in 2012 for $4.05 billion, its Anaheim and Orlando theme parks already had a popular “Star Tours” attraction set in a galaxy far, far away. But this past summer, guests took a real-life tour of the Star Wars universe with Galaxy’s Edge, Disney’s latest park expansion.

Disney has built a pair of identical 14-acre parks at its Disneyland (which opened May 31) and Disney World resorts (opened on August 29). At a cost of $1 billion each, it’s the largest single expansion Disney Parks & Resorts has ever created for one of its theme parks (and in this case, they designed a pair of lands simultaneously on two coasts).

While the movies, TV shows, and video games have offered first looks at brand new planets within the universe, this marks the first time a theme park is debuting a Star Wars planet. Galaxy’s Edge focuses on the Black Spire Outpost village on the rocky planet Batuu. 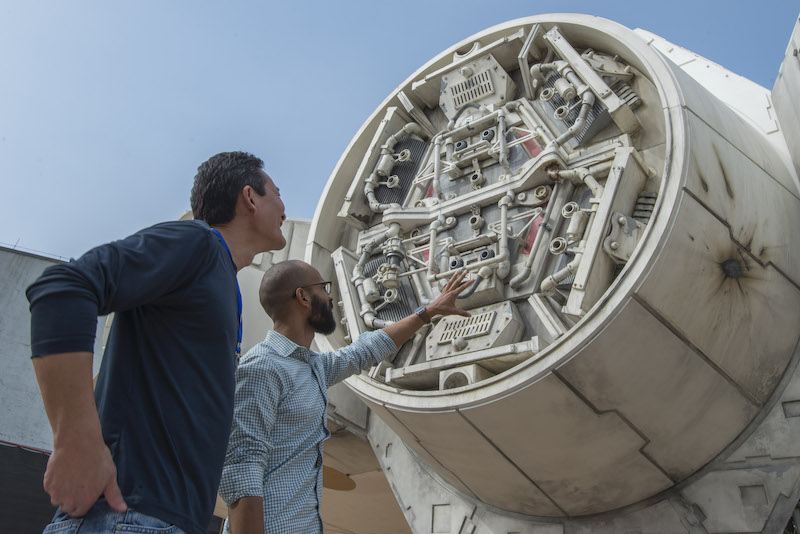 The one thing these photos don’t illustrate is the massive size of these themed worlds. Even though there are only two official rides within each park (“Millennium Falcon: Smuggler’s Run”, open now, and “Star Wars: Rise of the Resistance”, opening late 2019), each land is populated with cast members playing the roles of smugglers, spies, rebels, and First Order troopers. Popular characters like Chewbacca may even pop up from time to time.

There are also aliens, droids, and all types of hidden Easter Eggs spread throughout the areas. For example, you’ll find Luke Skywalker’s X-34 landspeeder parked just outside the central plaza. There’s even a full-sized Dianoga monster from the original film’s Death Star trash compactor sequence, which you’ll find living in the sewer system by the drinking fountains and restrooms.

Scott Mallwitz, executive creative director of Star Wars: Galaxy’s Edge at Walt Disney Imagineering, is the man behind this massive multi-year undertaking. During a private tour of the still-under-construction land at Disney’s Hollywood Studios in Orlando, he said the goal was to put guests in a place they’ve never been before.

“But more importantly to bring them to a place where they can invent their own story,” Mallwitz added. “We’re not following the story of Luke, Leia, or Han. We’re actually allowing guests to experience part of the of the Star Wars universe that they’ve never seen, but it’s part of the culture and part of the ichnography of Star Wars. It’s great to see the immersion that we’re creating here.”

These lands also mark the first time a full-scale replica of the Millennium Falcon has been created outside of a closed movie set. Guests will even be able to go on board and play the hologram chess game that was featured in the original film. And, of course, you’ll be able to fly it on a mission of Ohnaka Transport Solutions.

“Guests will be grouped into pilot, co-pilot, a pair of gunners, and a pair of engineers,” Mallwitz said. “You’ll take the Corellian freighter on a secret mission for pirate Hondo Ohnaka [from the Star Wars: The Clone Wars CGI series]. You have to retrieve something for a very important client. There are over 200 working buttons and controls in the ship, so I would take some time and get yourself up to speed because the ship does react to you and your decisions. The way you navigate, the way you interpret, the way you try to keep the ship together and functioning has implications on your mission.”

Galaxy’s Edge is also home to a number of interactive experiences, including Savi’s Workshop, where aspiring Jedi will be able to select their own saber crystal and design a custom lightsaber for $200 (which includes a carrying case). There’s also a Droid Depot shop that allows anyone to act like a Jawa and build their own custom droid for $100. You can also purchase a replica DJ R-3X droid for $150,
the former Star Tours pilot that’s now a DJ at Oga’s Cantina on Batuu. Speaking of the cantina, an assortment of exotic drinks like the Cliff Dweller will come with collectibles like Porg or Endor mugs. 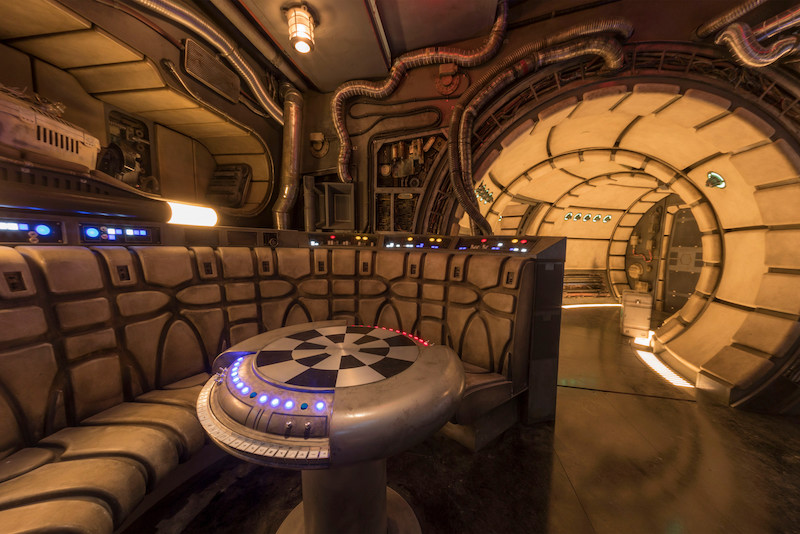 The famous “chess room” is one of several areas Disney guests will discover inside Millennium Falcon: Smugglers Run at Star Wars: Galaxy’s Edge before taking the controls in one of three unique and critical roles aboard the fastest ship in the galaxy (Joshua Sudock/Disney Parks)

“There’s so much to experience in the village, the ancient market,” Mallwitz explained. “To understand what it’s like to be in a trading port on the edge of wild space, we provide a full array of the sights, the sounds, the smells to bring the whole experience together … Once you’ve assembled a droid, it will help you navigate our land. It’s an incredible level of immersion we’ve never been able to achieve before.”

Guests will also be able to unlock adventures through the Disney Play app, which works across the Disney parks.

“We can deliver more content and more depth, more experience for the devoted fans using our Play app,” Mallwitz said. “We’re leveraging the handheld technology to actually discover parts of the world that you otherwise wouldn’t be able to discover; to unlock doors, to interpret codes, to go on missions. If you don’t want to experience that level of immersion, you don’t have to. But it’s there for those people to share and experience as they navigate this wonderful space port.”

Depending on how you interact with characters, the app, and the droids, your story is going to be different than other guests.

“Your decisions matter,” Mallwitz said. “There are a lot of implications here as you’re asked to interpret messages for people or interact with bartenders or negotiate a purchase price for droids with shopkeepers.”

And more is coming soon. The most immersive experience ever created at a Disney theme park is just around the corner, once “Rise of the Resistance” opens for business.

“We’re leveraging technology in a way that forwards and furthers the storytelling,” Mallwitz explained. “The technology we’re bringing forth in Rise of the Resistance is like nothing we’ve ever seen. The integration of those ride systems is incredible to put you in the middle of a battle between the First Order and the Resistance for the first time and come face-to-face with Kylo Ren.”