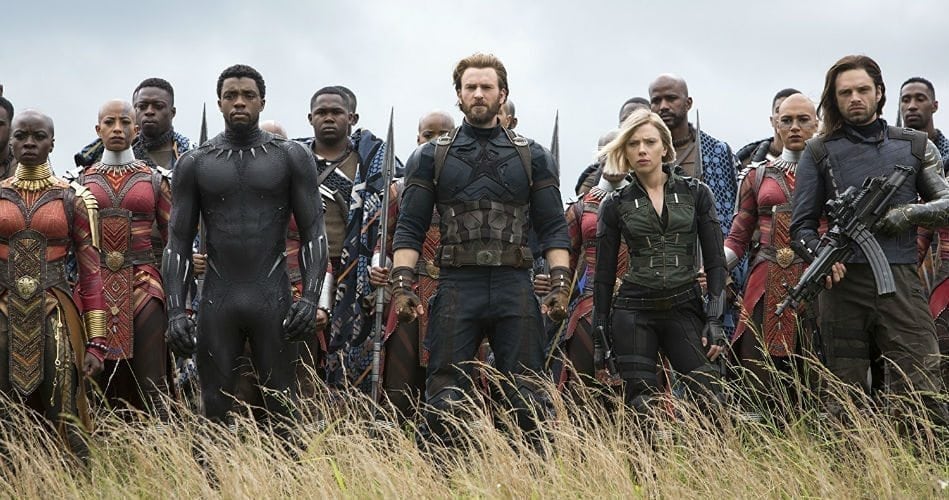 I cannot stress this enough; this breakdown is written as if you have already seen Avengers: Infinity War. If you’d like to read a spoiler-free review, please follow this link! You have been given fair warning. Plus, the movie made over $600 million in its first weekend, so half of you have seen it already anyway. So, once again…

A Whole Other Marvel Film

From the very first moment, Avengers: Infinity War establishes itself as a very, VERY, different Marvel film. Of Earth’s Mightiest Heroes, the mightiest have always been Thor and Hulk and I think that’s pretty clear. Isn’t that why both of those characters were omitted from Civil War? Sure they’ve met their “match” from time to time, but a god and a man with basically unlimited strength are hard to beat. But, beat them Thanos did. In just the first 10 minutes of this movie, we see the aftermath of Thanos’ likely effortless beatdown of Thor and the Asgardians. The God of Thunder is on his last legs like we have never seen him before as Thanos looks like he’s barely broken a sweat. Then, right as Loki is about to give up the Tesseract, Hulk jumps in to save the day. Right? That is what we have come to expect, especially from Hulk. Bumbling Bruce Banner is useless until the Hulk shows up to turn the tides of battle. Remember that awesome moment from the first Avengers when he punches that giant alien worm?

In this moment, Loki steals Tony Stark’s line from the first Avengers film: “We have a Hulk.” And that has always been enough. Having the Hulk has always been the trump card for the Avengers. And what does Thanos do to the trump card? Beats the living crap out him. In fact, the Titan beats him so horribly that Hulk refuses to show up for the rest of the film (and I have more thoughts on that later).

These first scenes introduce new ideas to the movie, different than any Marvel film before.

One of the main reasons that Avengers: Infinity War is so different than its predecessors is Thanos. Finally, in Infinity War we have a complicated, thoughtful villain. Look, I love these movies, but Ultron? Come on. He was shallow and vapid. I’ll admit Loki (RIP) has been a consistently good antagonist, but he’s the only one that stands out to me amongst MCU villains. Thanos, though, is complicated, emotional, thoughtful, dedicated, and willing. Viewers may not agree with his philosophy, but there are moments in the film that make the audience believe that he believes. After seeing the film, I believe that Thanos truly believed that what he was doing was best for the universe. He has a macrocosmic, utilitarian view of the world, one that is focused on longevity and pragmatism. There’s the classic ethical and philosophical question, would you kill one person to save a thousand? (See The Trolley Problem). In Thanos’ case, the question is more like kill billions to save future billions rather than having them all die.

In fact, Thanos is such a good villain that he gets more airtime than most of the protagonists. For someone not familiar with the Marvel Universe, it would not be crazy to assume Thanos as the main character of the film. Josh Brolin does an incredible job at portraying a complicated man who feels an incredible burden. Let’s just get this out of the way: Thanos is a bad guy. But that doesn’t mean he’s all bad. He sacrificed Gamora, right? Which means he actually loved her. Even she was surprised in that moment! And if he truly did love her, then he, in that moment on Vormir, actually had a nearly impossible decision to make between his daughter and his mission. What makes a good character — and has actually defined many of our Marvel heroes — is their dedication to their morals and their mission. That’s the decision that Thanos makes. But even after he succeeds at destroying half the universe, you can almost sense him wondering if it was all worth it. Unlike the many MCU villains before him, Thanos actually felt like he had something to lose.

This movie was gut-punch after gut-punch with intermittent moments of tickling. This is an obviously very confusing combination. There were three moments that really did it for me.

This whole movie is just a lesson in futility. No matter how difficult the decision the heroes had to make, no matter how good their plan was, no matter how close they ever got, they always lost.

Even if that classic Marvel humor we’ve come to expect was ill-timed at some moments, it still helped create this emotional rollercoaster. Plus, it was a reminder to the audience that one party may not know of the tragedy that just took place across the galaxy. And speaking of numerous parties, the Russo brothers did a fantastic job at dividing time between the various characters. Each storyline seemed well balanced. Each time I thought, “Oh, I wonder what’s going on with so-and-so. We haven’t seen them in a while,” the film would conveniently switch to their storyline. While some heroes had more on-screen time than others, it felt like every character had at least one moment in the spotlight.

Right off the bat, I think putting Bruce Banner in the Hulk Buster armor was a waste of time. Just give us the Hulk! I understand that they were trying to emphasize Hulk’s embarrassment and the conflict between the green guy and Banner, but come on. I didn’t come here to watch Bruce Banner clumsily loaf around in an Iron Man costume. I want to see the Hulk rampage!

Can we acknowledge that Vision was essentially useless throughout this whole movie? Think about it. What did he actually contribute? It wouldn’t be a big deal if they didn’t make him so powerful in Age of Ultron. He was strong enough to lift Thor’s hammer! Then, this same guy accomplishes nothing throughout Infinity War. Sure, I understand that he got stabbed in the beginning, hindering his progress throughout the film. But he’s a supercomputer with an infinity stone; shouldn’t he have been able to detect Corvus Glaive sneaking up behind him?

Finally, let’s talk about Peter Quill, a.k.a. the man who messed everything up. Yes, Thanos is the one that actually killed half the universe, but if it wasn’t for Star-Lord, maybe it all could have been prevented. I do sympathize with him to an extent. He found out Gamora was dead; he was angry. But if he could have just waited like 30 seconds, then he could have pummeled Thanos as much as he wanted. But, instead, in a moment of macho-selfishness, he clocks Thanos and ruins the whole plan. Then, after the Mad Titan retreats, Quill gets away with saying, “Did we just lose?” as if he could charm his way out of the huge mistake he just made and the millions of lives now on his hand. Look, we’ve seen Marvel superheroes mess up before (See Tony Stark in Age of Ultron). But those mistakes were always acknowledged and paid for. Quill’s huge blunder barely even gets acknowledged. That’s messed up.

Obviously, Captain Marvel is coming to save the day. How exactly she’ll do that? I’m not sure. Unfortunately, I’m not as familiar with Captain Marvel, although I do know that her strength and power is comparable to Thor, if not higher. The biggest questions here surrounds the future of those characters that perished. I think some characters that died (disintegrated?) will come back. I just can’t see Marvel getting rid of such young characters like Black Panther (did you see how much that movie made?) and Spider-Man (unless this is how they want to introduce Miles Morales?). Many of the characters that died in Infinity War have future sequels planned so I think the MCU will bring some characters back. But some will definitely stay dead.

This is how I see Avengers 4 playing out. I believe Dr. Strange had a plan when he gave Thanos the Time Stone. He saw the one way they could beat Thanos and maybe this is just part of the plan. Captain Marvel will come to save the day and maybe even bring back some of those disintegrated victims. Tony Stark and Captain America will play a large role in Avengers 4, but will likely die. Therefore, just as the first generation of Marvel was built around Tony Stark and Iron Man, I think the second generation will be built around Captain Marvel. Moving forward, I bet we’ll see Iron Man, Captain America, and the other O.G. Avengers phase out after Avengers 4, while Captain Marvel will lead the next generation with Spider-Man, Black Panther, Ant-Man, and likely some new additions.

Let me end with this. It takes a lot of work to pull of a 10-year plan. With that much time to develop a story, there are a lot of things to consider. Out of Avengers: Infinity War, audiences expected a certain MCU style and have come to expect certain decisions from the characters. But they also expected something fresh and new. The Russo brother’s ability to stay true to the franchise and the characters while also delivering a non-recycled, exciting story is truly impressive. It’s safe to say, I am very excited for Avengers 4.