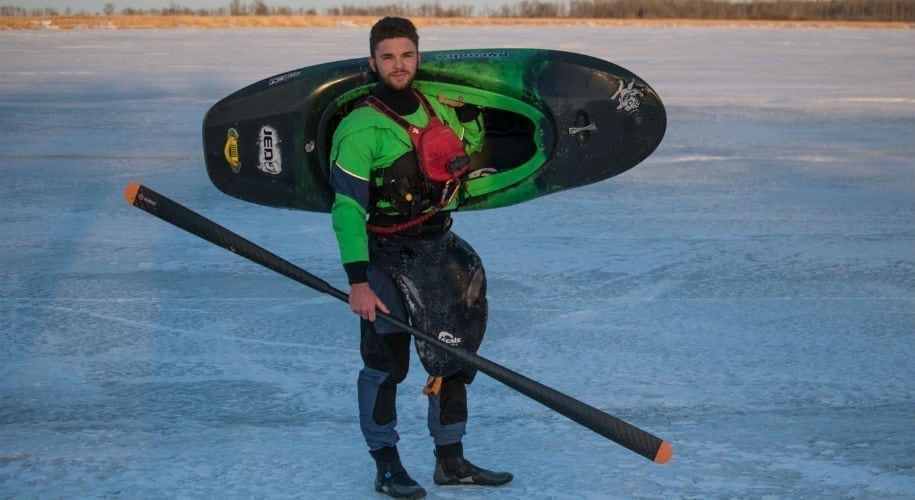 Kayaker and recent high school graduate Alex Martin is about to begin a 1,750 km journey with little more than his paddles and his kayak to accompany him. The 18-year-old intends to be the first solo kayaker to circumnavigate Canada’s Lake Winnipeg, a feat that hasn’t been successfully accomplished since a pair of kayakers made the trip in 1983.

Martin has more on his mind than setting records. The young athlete will be raising awareness for the lake’s increasingly poor water quality while building enthusiasm for more sustainable watershed management in the region. During his two-month journey, Martin will be documenting the lake and highlighting some of the area’s most pressing ecological concerns, like its pervasive blue-green algae problem.

Lake Winnipeg is heavily contaminated with a toxic Cyanobacteria that is lowering water quality and threatening aquatic ecosystems. Activities like agriculture, sewage disposal, and even the use of phosphorus-based detergents can contribute to heightened nutrient levels— feeding the algae and encouraging larger-than-average blooms. Alex Martin hopes to draw attention to the problem and encourage people in local communities to take a more active role in protecting their watersheds.

Martin’s voyage begins June 27th at Manitoba’s Grand Beach Provincial Park and, if successful, will conclude at the same location in late August. He’s packing light, taking only his VHF Radio, a cellphone, and a Garmin inReach device to keep him connected to the outside world. He scheduled food drops along his route to avoid transporting a two-month supply of food in his sea kayak and some of his supporters have even offered him lodging at their lakeside cabins throughout the expedition. You can follow Martin’s journey on his blog and through his social media channels.

Lindsey Vonn's Incredible Climb and View from the Top