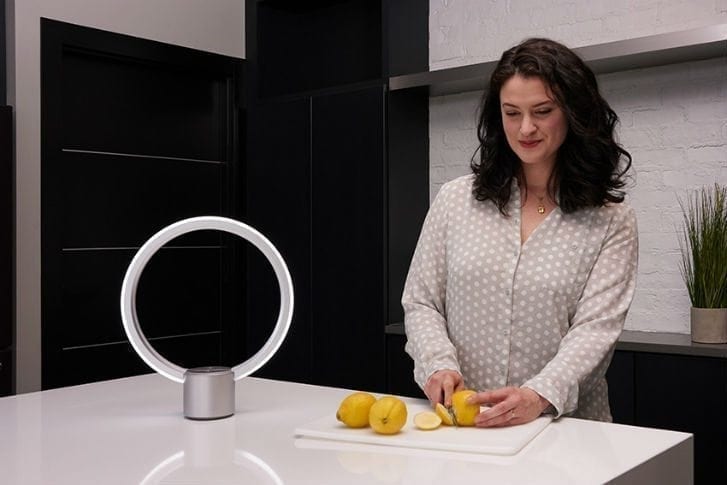 Earlier this year, The Economic Times published the prediction that, over the next 5-10 years, smart lights were to become one of the “largest IoT devices.” It’s a dramatic suggestion, but it’s also not alone. Marketing analysts and firms around the globe have high hopes for this particular segment of the connected tech industry — which could be worth as much as $19.47 billion by 2020 if this report by MarketsandMarkets is accurate.

What’s notable here is that the lighting industry’s last paradigm shift wasn’t too long ago — 2014 marking the U.S. phaseout of traditional incandescent bulbs in favor of more efficient LEDs. Just three years later, and a new world is already on the horizon, one that may see the majority of homes employing smart, voice-activated lights. It’s no surprise then that manufacturing giant GE has decided to begin staking its claim with the Sol.

Something interesting about the futuristic design of the C by GE Sol smart lamp is its intuitive use of lighting. Not only does the device feature a bright, customizable lamp; it also has two separate lights that act as a clock. If you look at the device, you’ll see a small blue light and a small red light slowly travelling around the circular design. These act as hour and minute hands, giving you an aesthetically pleasing way to check the time whenever you’d like.

However, let’s answer the most important question you’ve likely been asking about the Sol smart lamp: How does it work as an Alexa Echo replacement? Let’s start off with the responsiveness of the device. When compared to an Alexa speaker, the device does a pretty good job of answering all your questions, meaning one of Alexa’s greatest features transfers over well. Whether you’re checking on the weather or asking when your hometown team plays next, the Sol does not disappoint in the “smart” department. Of all the differences from the classic Alexa hub, we were very impressed with the speakers on the Sol. We were playing an interesting mix of Lady Antebellum, Metallica, and Chumbawamba, and the device showcased a surprisingly robust sound. Whether you’re looking to keep it on your nightstand or your desk, the device will provide you with high quality sound whether you’re just waking up or trying to get some work done. Additionally, this quality sound means you’ll be able to converse with the device much more easily.

You can purchase your very own SOL Here!