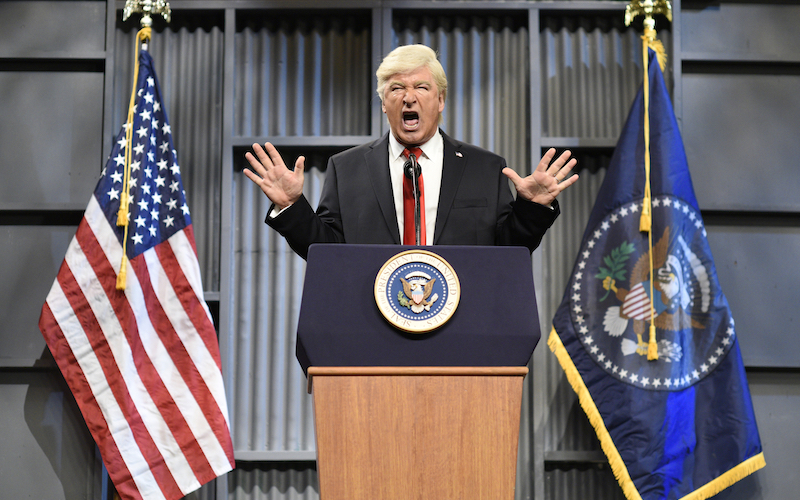 When you think of Saturday Night Live, there’s a good chance that the skit or impression that is conjured took place during an election season. SNL was at the peak of its powers when Chevy Chase played the klutz, Will Ferrell took liberties with the English language, Tina Fey’s virtuosic performance blurred the distinction between reality and art, and most recently, Alec Baldwin’s impersonation of a lip-puckered, temperamental man-child ushered a new era of political satire. There is no question that elections have resulted in some of SNL’s most hilarious and memorable skits. But, in looking at the show’s long history, have these routines had any effect on the politics they skewer?

The show took some time to grow into its powers as a vehicle for political satire. Chevy Chase’s impression of a clumsy, inept Gerald Ford made Inspector Clouseau seem suave in comparison. The impression stuck, but the comedy was more Three Stooges than Voltaire. The early years of SNL focused primarily on sketch comedy and let the “Weekend Update” segment take care of the politics.

The politicians of the 1980s emerged largely unscathed from SNL’s satire. Joe Piscopo, Harry Shearer, Robin Williams, and Randy Quaid all attempted to land a comedic impression of Ronald Reagan, but each impression of the Gipper ultimately fell flat. George H.W. Bush, however, became a goldmine for SNL and served as the launching pad for the show’s political future. Dana Carvey’s nasally, reedy-voiced impersonation of H.W. helped to cement his perception as the ultimate square.

When Bill Clinton hit the national scene in advance of the 1992 presidential election, SNL helped form a distinct generational gap between the two main contestants. Clinton was the morally ambiguous, brief-wearing, saxophone-playing Baby Boomer to Bush’s geeky, old fashioned guard of the establishment. Saturday Night Live’s take on the candidates may have had some impact on the election, as the key 18-24-year-old demographic favored Clinton by a margin of 46-33.

The Clinton presidency provided SNL with a great deal of low-hanging-fruit material, but little in the way of legitimate political satire. For most of the 1990s, Clinton’s character and personal exploits provided more material than the realities of the political climate ever could. The 2000 election was a new opportunity for SNL to enter into the arena of political discussion, with Darrell Hammond perfectly playing Al Gore as a laconic cold fish while Will Ferrell summed up the dictionary-shredding, proud and loud Texan George W. Bush, who’s constant gaffes made for an easy and possibly accurate summation of his presidency. The 2004 election was difficult for SNL, as Bush was already a worn punching bag and John Kerry was severely lacking in charm and personality. Bush won the election with a comfortable margin, setting the stage for SNL’s most relevant political period.

Up until the 2008 election, vice presidential candidates were largely considered an afterthought, especially in popular culture. This all changed when the commonly monikered “maverick” John McCain tabbed an unknown and unpredictable running mate from Alaska. Before the VPs were announced, McCain and Barack Obama were in a virtual dead heat. McCain swung for the fences and picked a little-known, sprightly, linguistically freewheeling mayor from Alaska, Sarah Palin. Had McCain known that one of the most talented and experienced alumnus of SNL happened to bear a striking resemblance to his VP, he might have reconsidered.

The initial returns on McCain’s selection served the Republican ticket well in the polls. A mere week after his announcement, a USA Today poll found McCain to be a ten-point favorite. Unfortunately for the Republican ticket, SNL was getting ready to start up in another week.

The new season of SNL focused heavily on the gun-toting soccer mom while pushing the other main players out of frame. It seemed that both the show and ticket were betting on Sarah Palin, and it had an immediate impact: when the real Sarah Palin met Tina Fey’s Sarah Palin on-screen in October of that year, SNL experienced its highest ratings in almost a decade and a half. The appearances were beneficial to the show, but not the ticket. As the show’s ratings skyrocketed, Palin’s public perception plummeted with abandon. In early September, 59 percent of likely voters had a positive opinion of Palin. By late October, 51 percent had a negative impression of the widely visible VP. The Obama ticket would go on to win comfortably in 2008.

The Obama presidency itself offered little in the way of material. The president himself was reliably gaffe-free, stable, and frankly, boring when compared to his recent predecessors. While Fred Armisen and Jay Pharoah did their best to summon a memorable or lasting impression, nothing ever stuck. While the president himself made several forays into comedy, to mixed reviews, he left little for actual comedians to work with.

Donald Trump’s entrance into the race for the Republican nomination was initially met with a combination of scoffs, enthusiasm, and intense media coverage. As a candidate, Trump hosted SNL on November 7th, 2015. The mood and tenor of the show seemed to mirror that of most politicos: he doesn’t have a chance, but let’s have fun while we can. As his campaign gained steam, the show’s focus on Trump changed sharply from an entertaining sideshow to an amusing yet confounding main event.

The 2016 Presidential Election spectacle was a much-needed shot in the arm for SNL’s ratings and status as a newsworthy source of political satire. While they had invited Donald Trump to host only a year earlier, the show was relentless against the Republican nominee, while Hillary Clinton was essentially given an unofficial endorsement. Ultimately, SNL’s young viewers preferred Clinton, but with less force than previous elections.

The Saturday following Trump’s victory, the versatile and talented Kate McKinnon belted out a rendition of Leonard Cohen’s “Hallelujah” dressed as Hillary Clinton. The opening felt like a demarcation line: being funny was secondary, and making a point was now the show’s primary goal.

Following Trump’s election, SNL has occasionally entered the general conversation through Alec Baldwin’s petulant impression, McKinnon’s conjuring of Foghorn Leghorn via Jeff Sessions, and Melissa McCarthy’s bombastic Sean Spicer. Even when the impressions are impressive, the overall sense is that the show is preaching to the choir, lecturing to an audience that helped write the lesson plan.

It’s virtually impossible to know for certain that SNL has had a direct impact on the results of presidential elections. We do know for certain that several impersonations and sketches left indelible marks on political figures for millions of Americans. Through satire and exaggeration, the show has made light of the figures that aspire to control the fate of the world. It stands to reason that impressions broadcasted to the living room have resulted in actions in the voting booth.

Feature Image by: Will Heath/NBC