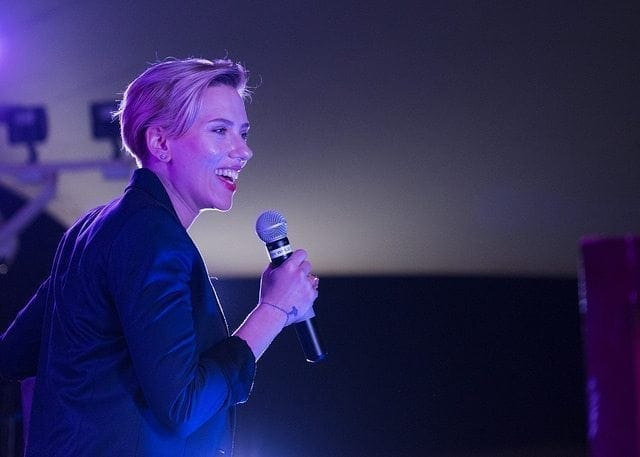 We recently interviewed Scarlett Johansson about all things tech and film. Here are some snippets from our exclusive interview, where we discussed the effects of technology on society, the escapism of using tech, and her favorite film robot of all time.

Taken from our exclusive. To listen to the full interview, go here.

Innovation & Tech Today: From your perspective, do you feel like all this technology in general is making us more connected or less?

Scarlett Johansson: I think it’s both, you know,  I mean I talk to people that use…I don’t have any social media, and I don’t really know how to use it so I’m probably, well, I guess I have a different perspective because of that, but I look at people like my mom, who’s on Facebook or whatever, and she has had enormous success finding people she probably really never thought she’d ever see again, and kind of reconnecting with them. And you know, that element of it is awesome. Personally, if I haven’t known somebody up until this point, my argument is I don’t want to hear from you [laughs].

I mean, I’m curious, but not that curious. I guess I keep my close friends pretty close, and I don’t know if that’s it. But for some people, it’s awesome. You know, it truly gives them pools to reach out to…people that share their life with relatives across the country or people in the armed forces. FaceTime. I mean, how many marriages has that saved? In other ways, the idea of being able to be whoever you want to be and never really having to fail exactly or showing whatever parts of your life that you want everybody to see. The facade of an existence you can have, create for yourself online, is… I think it’s strange. That element of it is very dark to me. We’re disconnected from each other because they’re disconnected from themselves. And the reality is the life that they’re living, that they can be living, can be unhealthy and have many negative effects on general relationships.

I&T Today: It’s liberating but there is a kind of a constant escapism there that can be problematic for a lot of people.

SJ: Yeah, I think escapism is definitely important. Hell, I’m in the industry that is, I think, the most successful at it and thank God for it. I love to be entertained, and to – gosh, it’s great to step into a dark theater and get away for a couple of hours. But you have to actually be proactive and go to a theater and buy a ticket and sit down and shut off. And the fact that you have a device and you’re both dealing with real life and fake life at the same time. And sometimes you can be having a really visceral conversation with somebody on your device and simultaneously living this other life that feels just as real. It’s strange. It’s a lot for the future generations to navigate, and I wonder what will happen.

I&T Today: I’d hate to finish up what has been an intriguing discussion of technology and film with a softball question, but it wouldn’t be an interview without one. So what’s your favorite movie robot of all time?

SJ: [laughs] My favorite movie robot of all time? I would probably have to say the Terminator, I guess.

You can listen to our full interview with Johansson here.

Featured Photo Courtesy Of Chairman of the Joint Chiefs of Staff