When it comes to technology, I’m a late bloomer. In spite of the fact that I grew up alongside the technological revolution, I spent a significant amount of time in the suburban Kansas woods after school while kids were running home to chat on AOL or MSN. Later on, I silently boycotted Facebook until I finally decided to hush everyone’s persistent nagging.

I am fascinated by our capacity to access mass amounts of information at the touch of a fingertip or share a glass of wine with a friend halfway around the world. I am also frightened by it. This fear stems from the fact that, as our communication and connectivity reaches its peak, we seem to be growing farther apart. We’re all too familiar with the image of couples, families, and friends out to dinner staring at their phones. It has become a norm; we have grown accustomed to constant communication and the very apps that have been designed to connect us are increasingly encouraging isolation.

I recently embarked on an unplugged journey around the world. This trip of self-discovery quickly progressed into a pursuit of conscious detachment from technology. As a result, I rented out my place, threw some essentials in a backpack and decided to leave my phone at home. This was, without a doubt, the best decision I have ever made.

Disconnecting in modern times proves to be quite the challenging task, especially when on the road. There’s the whole question of booking flights, finding accommodation, itineraries, Visas, so on and so forth. Thus, I opted to shy away from completely going rogue and bought a keyboard for my iPad, taking it along with the astronomical aspirations of writing a novel and reading a dozen others. Before my departure, I informed my loved ones that I would be unreachable and promised a postcard here and there. With that, I secured freedom from purposeless chit-chat and recorded a message on my voicemail officially declaring myself “off” the grid.

The trip around the world commenced with a quick introduction to India via the Golden Triangle and then proceeded at an ashram in the holy city of Rishikesh. Although WiFi was readily available in most locations, I had chosen the alternative route and refrained from using my iPad during the month stay. I had signed up to delve into the tradition of yoga and that involved cleansing my body of toxins both physically and mentally. While some of my fellow travelers remained connected and frequently frustrated by the power outages and feeble internet connection, others embraced the liberty of detachment. 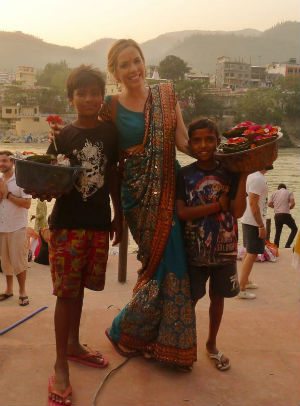 When you aren’t busy scrolling through news feeds or silly cat videos (which are always fun, don’t get me wrong) you realize that you can engage in conversation with the shopkeeper, speak to the table next to you, and maybe find yourself with a silly smile painted on your face singing Beatles songs with a group of strangers at 3 AM – at least I did.

By going off the grid I discovered that the world becomes more tangible as face-to-face interaction replaces a screen. The release of a rectangular device sharpened my awareness and led to eating fresh cookies bought on the street with Lalta, a little boy who walked miles from his village every day to sell flowers on the river bank. Lalta’s heart melted mine as we talked about life and I drew maps of the world for him. We would set a time and he would meet me there every afternoon with a bowl of flowers as a present. He didn’t have much, but he still insisted on gifting the flowers. He loved to swim and we would jump in the Ganga River to cool off.

The month passed by in the blink of an eye. As time dissolved, I was indefinitely transformed. I found myself listening to others instead of simply waiting to respond or escape. My eyes began to notice details: leaves blowing in the breeze, families frolicking in the river, and people helping each other. I began to perceive features that remain unnoticed to the distracted eye and truly acknowledged the blend of hues in the sunsets instead of enhancing them on my Instagram account. If technology allows us to travel through space and time, disconnecting permits us to fully participate in the moment.

The experience led to a temporary rejection of social media. I found myself with the familiar desire to abstain from plugging back in and exiting my newfound bubble of serenity. I was well aware of the tsunami of messages and headlines that would flood my state of clarity. Nonetheless, I wanted to stay in touch with the people who had filled my soul during that month. A part of me missed my family, and I knew I had to make a conscious effort to find an equilibrium between both worlds. So, I left for the ghost town of Goa during the summer monsoon and gradually reconnected to the cyber world. The impact was shocking, to say the least.

After a few days, I became more aware of my own gradual dependency on the devices I had lived so well without. Eventually, I began to see it with a begrudging acceptance. The fact that I was able to maintain contact with those who had embarked on that journey with me, write about it and share it with my friends, all while continuing my personal training via e-books, online forums, and communities, was enriching.

Perhaps while sharing that glass of wine with someone halfway around the world, we can find something to toast after all.

Story and photos by Michele Bigler.

Lindsey Vonn's Incredible Climb and View from the Top