When physicist Andrew Yakub set out to bring down the cost of solar panels, he turned to studies conducted for the 1950s nuclear arms race. This research would then become the basis for his new company, Rayton Solar. As company founder and CEO, Yakub discusses the technology behind his solar story.

Innovation & Tech Today: Rayton’s unique method of manufacturing solar panels revolves around a particle accelerator. What led you to develop this concept?

Andrew Yakub: In 2013, I was looking to lower the cost of Solar by 30% to continue doing installations. The process of cutting silicon when manufacturing panels is incredibly expensive and wasteful, so I decided to reinvent this by using a particle accelerator instead. 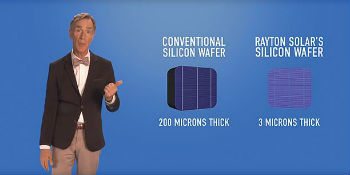 I&T Today: How did you embark upon this undertaking?

AY: What’s interesting is that all research on high-energy physics was actually driven by the atomic bomb race, including the creation of particle accelerators. With that in mind, I began my quest by scouring national laboratories for papers on high-current proton accelerators. I discovered one had been built using research published by two scientists in the 1980s, and was later licensed to commercial industry. So we did a 10% redesign to make them work for Solar, and licensed them for use in our industry.

I&T Today: Okay, how do particle accelerators fit into our daily world, and how exactly can they be used to create solar energy?

AY: The first particle accelerator was a Cathode Ray Tube, or CRT. Remember those clunky television monitors back in the day? They were all CRT monitors. So you actually used to own a particle accelerator. With those, electrons were being shot at a screen at 10s of volts to make the image. Well, we’re shooting 300,000 volts…and instead of electrons, we’re shooting protons. Now, when most people think of particle accelerators, they think of high-energy, low-current machines, like the one at CERN. Conversely, when manufacturing solar panels, you need a high current of low-energy particles to penetrate the silicon and stop at the same grain boundary. A weakness is created such that the silicon will break off along that point. As for other ways we can employ particle accelerators, I personally think we should put funding into anti-matter research using particle accelerator technology. At the moment, antimatter is the best way to store energy we can think of—since just one teaspoon of anti-electrons could power your home for an entire year.

I&T Today: Who’s one of your primary influencers within the science community?

AY: I take a lot of inspiration from Richard Feynman and his humorous antics of physics in our everyday lives. I’ve also always greatly admired Bill Nye, and he was fascinated by this technology and came on as our spokesperson. That was one of the happiest moments for me in starting Rayton.

I&T Today: Do you think that original nuclear arms research will have other positive modern-day uses?

AY: It’s uplifting that something with such dark beginnings could transform into something positive, like solar energy. I think this demonstrates that all research is good. Rayton is a case example that we never know how research will ultimately be used.

Rayton is presently building a new particle accelerator with Phoenix Nuclear Laboratories and is slated to open a pilot manufacturing line in 2018.