Nintendo has experienced the best of times and the worst of times over its many decades in the video game industry. The Japanese giant has had ups and downs with its console releases, striking out with the GameCube in 2001 only to hit a grand slam with the Wii in 2006, and then striking out again with the Wii U in 2012. On March 3, 2017, Nintendo hopes for at least a home run with the Switch, a hybrid home console and portable device that brings the best of Nintendo’s two strengths to one device.

While the $300 system won’t come with any pack-in game (Wii Sports helped turn the Wii into the third bestselling console in video game history), Nintendo has learned from its big mistake of not supporting the Wii U with key franchises. The much-anticipated The Legend of Zelda: Breath of the Wild is a launch title for the Switch, for example. That game looks amazing on a big screen in HD (although the Switch doesn’t support 4K like the new PlayStation 4 Pro and Xbox One S) and plays great on the portable 6.2-inch HD screen (the battery life will last about three hours with this game). And there are two Mario games (Mario Kart 8 Deluxe and Super Mario Odyssey) releasing this year, as well as Splatoon 2. 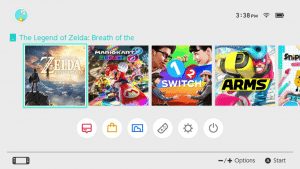 There are also some unique games that tap into the Wii mentality of bringing everyone in the family into the interactive fold. 1-2-Switch is a collection of 18 multiplayer mini-games that range from Table Tennis to Quick Draw to Samurai Training. One of the truly unique things about many of these games is that they’ve been designed to play without the screen, using only the new (and very small) Joy-Con motion controllers to track the action. Like the Wii, this makes just watching people play these games as much fun as the players actually participating. That’s the type of magic that was missing from the Wii U.

Many of Nintendo’s launch games were designed to appeal to both the loyal gaming fans the company has assembled over the decades, as well as those who may not have picked up a controller since the Wii. ARMS extends the fighting genre by offering virtual pugilists that pack an extra punch courtesy of elastic arms. This game uses a pair of Joy-Con controllers – one specifically designed for the right hand and one for the left – as players face off in the virtual world while getting a slight workout in the real world.

Of course, the Switch isn’t perfect. At the official Nintendo New York City reveal event, the Switch Pro Controller (sold separately for $70) was used to play most games because the Joy-Con controllers ($50 each or $80 for a pair) are so small – it’s like they were designed for kids. Also, Nintendo is sure to make a killing off those eager loyalists who have pre-ordered this sure-to-be-sold-out console. With no pack-in game this console gets really expensive when you add in the extra controllers ($50-$80), any extra loading docks to plug the Switch into additional TV ($90 each) and games ($50-$60 for most titles).

One of the reasons Nintendo Wii connected with so many people was the affordable price point, the pack-in game and the innovation of the Wii controllers. While Switch is a better offering than Wii U, it still has some price hurdles. Of course, Nintendo is targeting its die-hard fans at first, and any price points aimed at everyone else will come in future years. But it does look like Nintendo won’t be going the way of Sega and exiting the console business any time soon.

Featured image courtesy of Wikimedia commons, released into the public domain by Owen1962.