I sat down with Academy Award nominated director Morten Tydlum for a wide ranging interview about his new film Passengers. We discussed the chemistry between stars Chris Pratt and Jennifer Lawrence, CGI vs. practical effects, and the Sci-fi films and writers who have influenced him the most. Passengers is currently in wide release across the country.

Innovation & Tech Today: Hello Morten, I was wondering what it was like to direct a Sci-fi film?

Morten Tydlum: This movie isn’t about either saving a planet or finding aliens. This is about people. I love it when a movie takes characters, puts them in extreme circumstances, and then they have to make some really difficult choices. I think that’s really interesting to explore, I think that’s something I’m really attracted to, and I love that it is a very intimate movie, and it’s an epic movie at the same time. It’s obviously going to be challenging; this movie was such a balancing act because you can’t really put this movie into one genre. Is it an action movie? No, but it has a lot of action. You could say romance, but it’s not just a romance. It has drama, but it’s not a drama. It has comedy and humor, but it’s not a comedy. So it’s kind of a movie that both evolves as it goes along, but it’s also a movie that’s really hard to put into one category. And I really find that appealing.

I&T Today: Were you conscious of that as you were filming it? Trying to achieve that balance of these different genres coming together into something coherent?

MT: That was something we planned for, and I knew that was going to be the challenge. Sci-fi is interesting because you can take something, like a relationship, characters, feelings, something that is very relatable to us, and you can put it in a different setting and look at it from a distance, or through a different glass, or look at it differently because you’re putting it in a more extreme situation. I find that very, very interesting. Also, it’s everyone’s dream to create a spaceship; like the Millenium Falcon, the Enterprise…

Just to create and design the Avalon (the spaceship in the film) was so fun. It was a big, big process, but I love it, because it feels like it’s a character in itself.

I&T Today: The ship is definitely its own character in the film, and just the size of it is incredible. What was that like coming up with the Avalon? What was that process like?

MT: We went through a lot of designs. We wanted gravity not to be something that was just magically there, so everything moves 51 meters/second to create centrifugal force, to create one G of gravity. So you have the spinning blades and the rotating center. We have a plasma shield in the front. I wanted it to be something real and sustainable, so not like the magic shields of Star Trek. It’s all based on the principle of how this corporation would’ve built this ship.

We were looking at these big ocean liners that took immigrants from Europe to the Americas centuries ago, with the different classes, such as luxury, and we wanted to bring that into the spaceship, because that’s what it was. It’s sort of like an immigrant ship that is sailing through the night to its destination. It doesn’t really matter whether it was to the other side of the ocean or through space.

I&T Today: I thought one of the things that really succeeded in the movie was the technology that the characters interact with. It’s very familiar, but at the same time it seems futuristic.

MT: I wanted it that way. I think that everything comes out of need. I hate it when technology in Sci-fi movies looks fancy because you want the effects. Everything should be based on how it really would be. If it’s too many sparkly lights and gadgets, then you would never use it – you would hate it. If your iPad behaved like that you would throw it away. So how would it be so it would actually make sense? So that it would react to them in a way that makes sense? 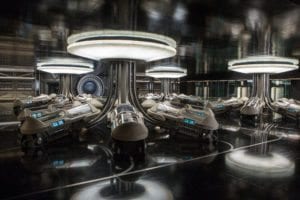 We actually worked with Sony in Japan to create a lot of these things, with a product designer there. We spent a lot of time creating something that that people would love to have. We did so many practical effects – all the interiors were built, none of it is VFX. Even the robots are built and used in the set. So the [actors] can really interact with them. It’s a performance driven movie, where the characters are the focus, and I wanted the actors to be able to relate to each other.

I&T Today: You can definitely see that the sets are real, and it definitely makes a difference. But I guess, conversely, was it a challenge or did you enjoy the special effects part of it?

MT: Some of the things like the zero-gravity pool was of course something that we had to do in the visual effects. Again, everything was based on reality. We did all these simulations of how water would behave in zero-G. So how does water move? There was a lot of research, a lot of testing done for this, to create that feeling.

Acting is reacting. Acting is taking in your surroundings and responding to it. If you just put actors in front of a green screen, it’s going to be impossible to get the performance you want from them. So to actually build the set, to have robots, to have these things happening, was very important. Same with the bar and Michael Sheen’s character. Him swooshing around, all of that was done on camera. I tried as effortlessly as possible to merge CGI with actual in-camera effects as much as I could. 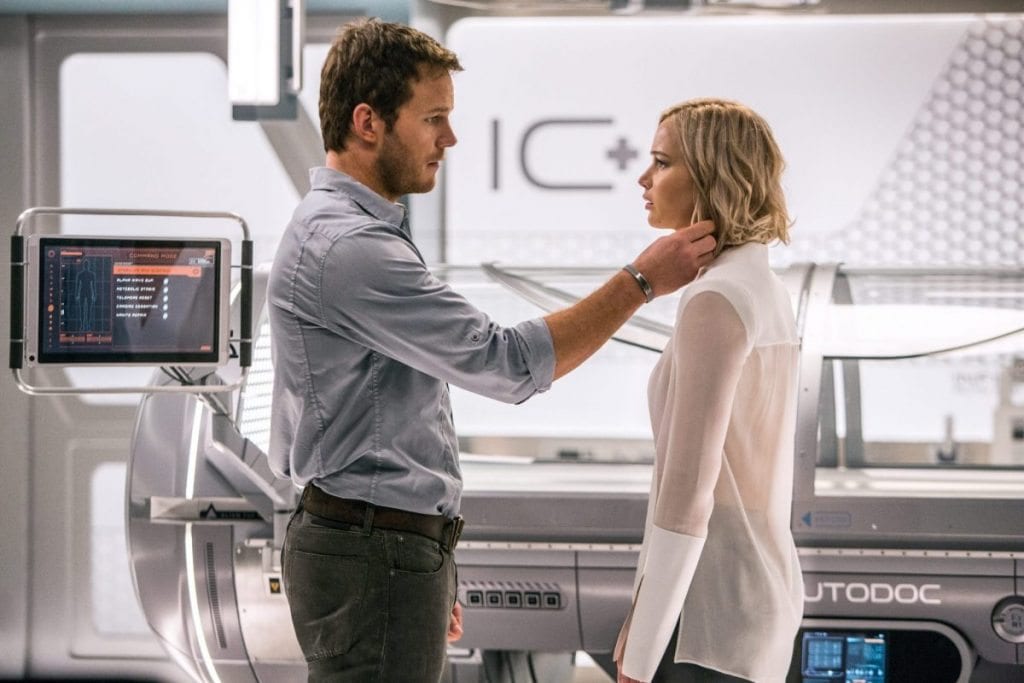 In the Infirmary, Jim (CHRIS PRATT) and Aurora (JENNIFER LAWRENCE) realize they have limited options in PASSENGERS.

I&T Today: One thing I noticed was the amazing chemistry between Chris Pratt and Jennifer Lawrence. As a director, I’m sure that’s something that you hope for; but do you help facilitate that, or is it something that happens organically on set?

MT: I think the biggest fear of any director is managing a failed relationship, so that the two actors would hate each other, or don’t get along. It would be such a nightmare. They had never met each other when they were signing on. I met with them individually, and I just knew that something would happen when you put them together, some magic. It was true. They met for the first time when we did the rehearsal and read through the script together, and immediately there was some connection between them. They’re both so funny and so genuine.

I actually had the opposite job. Instead of creating chemistry, I had to say, like when I was shooting the part when they were getting to know each other, “You don’t know each other yet. You can’t be that comfortable, you’re both strangers.” Or at the part when they are at war with each other, I had to really reinforce that they now hate each other. That was the hard part. The easy part was to have them have a good time together or be in love together, because they had such great connection between them. 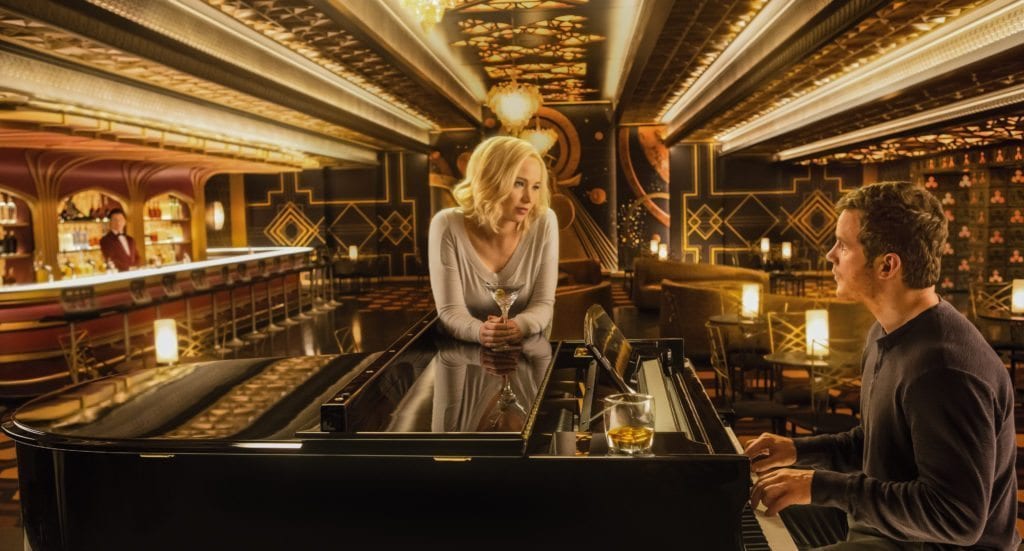 To switch gears a little bit, Alan Turing is one of my personal heroes; was it exciting to bring his story to film, and to a lot of people who maybe didn’t know about him before they saw The Imitation Game?

I really feel privileged that I was allowed to tell that story, and introduce it to so many people. The movie was shown in China. No one in China knows about Alan Turing, and to introduce him to that part of the world…he was one of the most important thinkers that we had, who was extended this great injustice.

One of Alan Turing’s big ideas, what it means to be human, what does it mean to be alive? If you can imitate life, and I think you’re alive, does that mean you are alive? What does that mean? Can a machine ever think like people? Or because it’s thinking differently, is it not really thinking? Those are the ideas that Alan Turing brought in, and in many ways, when we discussed Arthur with Michael [Sheen], that’s something I thought that was really fascinating. Arthur is trying to mimic life, because he’s been programmed for these short-term relationships. He’s a bartender, he can only have this five-minute conversation, and now he’s suddenly spending everyday together with a person. And he starts to mimic life, he tells a joke for the first time. He starts to feel happiness that he can make them laugh. He is worried about their relationship. So he was a great part of this, to talk about that in our process, about how the artificial intelligence is imitating life.

Are there any favorite sci-fi films or books; something that you feel has had a great influence on your career?

It’s a cliché, but I would say of course Kubrick, as a filmmaker, he means a lot to me, I also really like Ridley Scott’s early movies, which growing up really got me into sci-fi. Reading literature, I think I love William Gibson, and Asimov is another sci-fi writer who I really respond to, and Philip Dick. There are all of these writers who mean a lot to me, and which I really enjoyed. And these are all writers where the story is not so important as the idea. They’re all exploring ideas, which I think sci-fi can do better than any other genre.