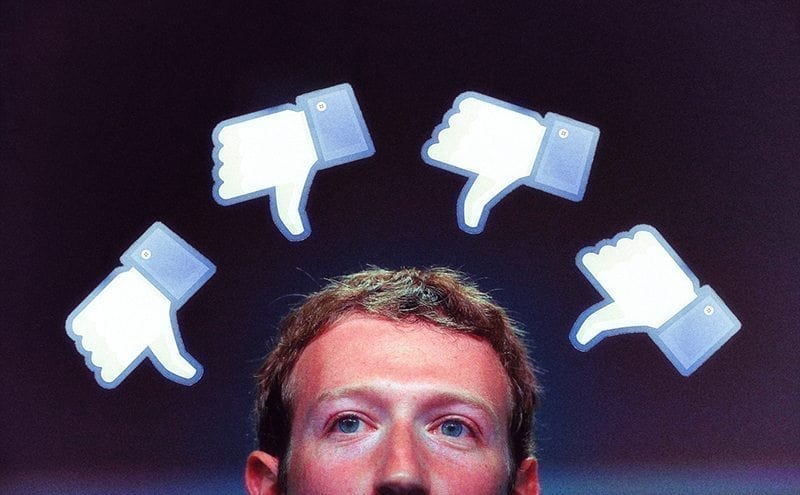 It seems like for over the past year or so, people have been asking this question a lot. The once social media pioneer-turned-titan has taken a beating recently, and the cracks are beginning to show. Last month, Wired published an extended piece analyzing Facebook’s recent history — and downturn. Titled “Inside the Two Years That Shook Facebook — and the World,” the article looked at both Facebook’s internal and external issues, especially as it pertained to the political realm. The cover image for the piece featured Mark Zuckerberg donning bruises and bandages, an apt metaphor for the beating Facebook has been taking. In 2017, Zuckerberg was named “Misinformer of the Year” by the non-profit journalism watchdog Media Matters. Explaining the decision, Media Matters President Angelo Carusone claimed, “We selected Mark Zuckerberg as the Misinformer of the Year because Facebook’s actions in 2017 have been more of a public relations campaign than a deeper systemic approach to address the underlying causes of the proliferation of fake news and disinformation.”

But things haven’t been much better for the Social Network in 2018. Just this weekend, Facebook disclosed that the UK-based data analytics firm Cambridge Analytica stole access to data from 50 million Facebook users in 2016. On Sunday, an ex-contractor for the firm revealed to The Observer that the profile data was used to bolster Donald Trump’s presidential campaign. Since the revelation, Facebook stock has plummeted just under seven percent as this is written and Zuckerberg has lost around $3.8 billion.

Young people are increasingly disinterested in Facebook (seriously, ask anybody under 16 if they use Facebook and the answer is likely negative) and the platform’s consistent blunders may make it more unattractive to its existing users. Heck, the company even admitted in late 2017 that social media might be bad for us.

And so then I start thinking why I even use Facebook anymore. Is the platform so good that it’s worth dealing with the headaches? Or does Facebook just suck? Obviously, there is still something to be said about how it connects people. (You want to throw a party? Make a Facebook event.) And I enjoy Facebook Messenger, too. But, what else does it really contribute to my life besides the occasional convenience? As I scroll through my newsfeed, I see ads followed by 3-4 minute videos followed by the occasional news article or post from that one girl that went to my high school. It isn’t like Instagram or Snapchat where I can easily see what my friends are up to. But it also isn’t like Twitter where I can streamline all of my news into one place. It’s as if Facebook lost its identity, trying to be everything from a media syndicate to a news outlet to a social network. But, what it created seems to be a confused, convoluted news feed that essentially acts as an echo chamber for the user in question.

But it isn’t all bad. At least 50 people that I barely know wish me a happy birthday every year and I can keep up to date on the Dodgeball fan page, of which I am still a part of for some reason. And it’s ironic too, as even this post will ultimately make its way onto Facebook. But, as is the case with our relationship with any technology, it’s always important to take a critical look at how it affects our lives. Even though Facebook has been around since 2004 and many of us have been a part of the platform for a while, maybe it’s time we think about the reality that Facebook might just suck.