Magikarp Jump: The Best Game About Teaching Fish To Jump

It took Nintendo quite some time to embrace mobile gaming. Up until the release of Super Mario Run late last year, the company had avoided directly developing games for smartphones for years. Well, that didn’t stop The Pokémon Company, the developers of a little-known series called Pokémon, from showing our phones some Poké-love. Wow, I just wrote that word. Let’s quickly move on from that and take a look at The Pokémon Company’s newest mobile release, Magikarp Jump.

For those that didn’t spend their adolescence catching colorful digital creatures instead of playing outside, Magikarp is a small fish-like Pokémon, generally regarded to be one of the weakest, most useless creatures in the game. Who better to base a dedicated game off of? 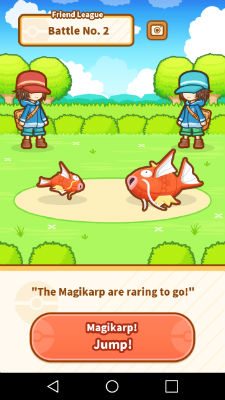 Let me start off this review by saying that Magikarp Jump succeeds tremendously when it comes to aesthetics. The game begins with a fantastic homage to the original opening, complete with a professor welcoming you to the game’s world. Clearly, this game about teaching a fish to jump higher was crafted for hardcore fans.

In terms of gameplay, it’s pretty simple. You feed and train your Magikarp in order to raise its stats and challenge the league, in which you compete with other Magikarp to see who can jump the highest. OK, I admit it may not sound very thrilling from your perspective, but there is something satisfying about boosting Magikarp’s stats in order to make it stronger. It’s kind of like you’re Rocky’s trainer, but if he was training a fish instead of a boxer. Which I believe was the original version of the film.

Interestingly enough, the game heavily reminded me of yet another game I spent a lot of time with in my childhood, Insaniquarium. Similarly, you take care of and feed a virtual fish in order to successfully occupy a bit of your free time. However, that game had aliens that attack your fish. No cut to Magikarp Jump, but some aliens definitely wouldn’t have hampered the experience.

From the cartoony graphics to the charming concept, Magikarp Jump is, to put it simply, a delightful app. While it won’t offer the complex gameplay of Pokémon Duel or the adventuring of Pokémon Go, Magikarp Jump offers a simple experience if you just want to take your mind off the real world for a few minutes and teach a fish to jump higher. I can honestly say I never foresaw myself writing that sentence.

Magikarp Jump: The Best Game About Teaching Fish To Jump