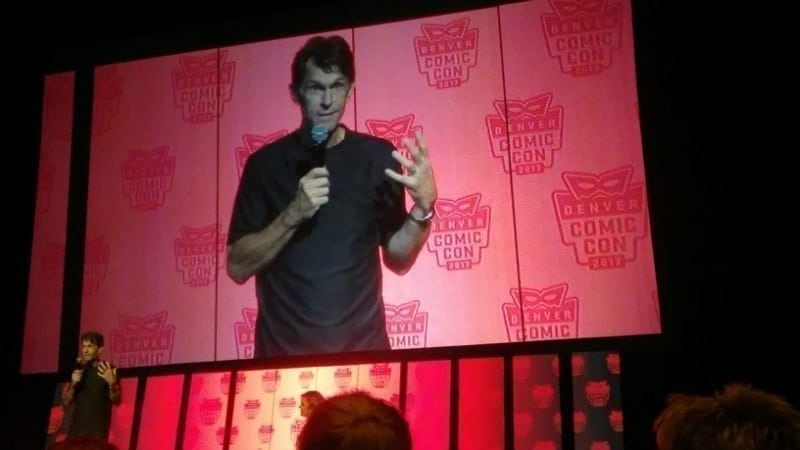 For over 20 years, one man has been the most recognizable voice of the iconic superhero Batman. Kevin Conroy, who has voiced the Dark Knight since 1992’s Batman: The Animated Series, was one of the many animated Justice League cast members reuniting at this year’s Denver Comic Con event. And, in his personal panel, he definitely didn’t disappoint. Let me put it this way: he started off the panel by reciting Batman’s classic speech from the 90s show. This is someone who knows how to please his fans.

One definite theme of Conroy’s panel was the love he feels for the character of Batman. He explained what it was like to get into the role, feeling the pain and limitations that make the character unique. He also revealed during the panel that his favorite episodes of the classic animated series portrayed Batman as a conflicted, vulnerable character, such as in his personal favorite episode “Perchance To Dream.”

Conroy’s attachment to the character was also shown when he was asked about the modern live-action portrayals of Batman. After pausing for a moment, he admitted he wasn’t a fan of the darker turn the modern Dark Knight has taken. As he explained, the defining characteristic of Batman is that he doesn’t kill, yet this seems to be neglected in the newer films. I’ll take it he was referencing Batman V Superman in which Batman kind of kills a whole lot of people.

One of the most interesting parts of the panel was Conroy’s story about a conversation with the recently deceased Adam West. In addition to praising West’s kindness, he said that West told him about the role of Batman “It’s yours now. Run with it.”

Something that obvious throughout the panel was how highly Conroy regards his fans. When asked about the comical singing performance by Batman in a Justice League episode, he took the time to sing the song to the fan. Not only that, he sang “Happy Birthday” in its entirety to another attendee. Clearly, he loves to show off that golden voice. And it made the panel that much more special.