Justice League’s Ray Fisher On His Transformation into Cyborg

On November 17, for the first time ever, Justice League will assemble DC Comics’ greatest heroes on film to combat the forces of evil. I had the opportunity to speak with Ray Fisher, who portrays Cyborg in the blockbuster film, about the hero he’s playing, his preparation for the role, and how it feels to be part of the Justice League’s big screen debut.

Innovation & Tech Today: Justice League looks to properly introduce Cyborg into the DC Extended Universe. What can you tell me about the character? 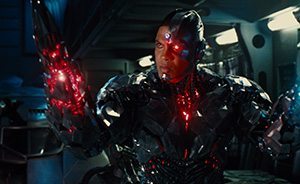 Ray Fisher: Victor Stone (aka Cyborg) was an all-star college athlete who endured a tragic accident that destroyed most of his body. Victor’s father, the head of STAR Labs Silas Stone, took it upon himself to use whatever means he could to save his son’s life, rebuilding Victor’s body but effectively turning him into a cyborg.

When we meet Victor in Justice League, he’s only recently become Cyborg—he feels trapped inside of a mysterious and monstrous body that gives him amazing powers, opening him up to worlds of information and new abilities. He’s learning to control his ever-evolving body, reintegrating himself into the world and mending his relationship with his father, and then he’s asked to help save the planet…no biggie, right?

I&T Today: How did you prepare for the role of Cyborg for the film?

RF: Very early on in the process, Zack and I began talking about all that is Cyborg. It was by far one of the best processes I could have asked for. On the comics side of things, I prepared by reading just about EVERYTHING! I drew a lot of inspiration from Marv Wolfman and George Perez’s original run of The New Teen Titans from the 80s–I enjoy the idea of Cyborg being rough around the edges and opening up over time as he grows more comfortable with himself and the other members of the League. On the physical side of things, there was A LOT of training. I put on about thirty pounds in the process.

I&T Today: This is the first time the Justice League will be portrayed on film. How does it feel to be part of such a blockbuster event?

RF: Being a part of the Justice League for the first time on film is every dream I’ve ever had come true. When what you love personally and what you love professionally come together in this way, there is no comprehensible way to describe it. There will be people that look at this film with same admiration that I had watching Batman for the first time–the same admiration that I had watching Blade for the first time! A live-action Justice League is something my childhood self never fathomed possible, let alone me being in it! What a life, man.