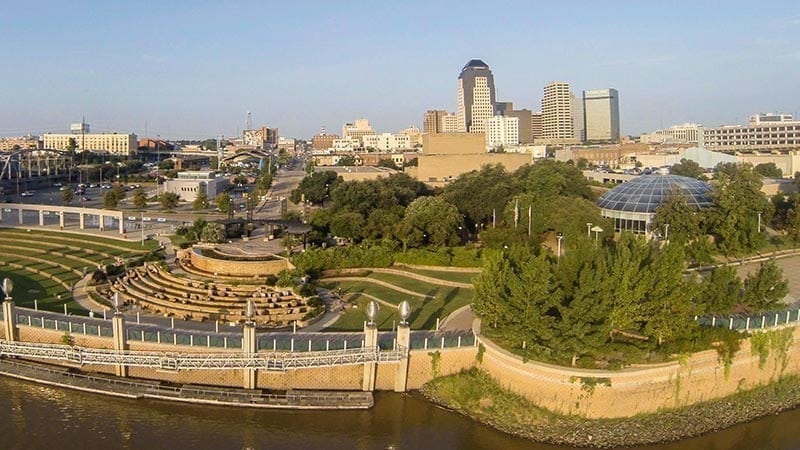 “People are more approachable. I’ve been involved in a lot of organizations here in Shreveport because they’re a lot more open to people from the outside.”

So says Scott Wysong, an associate professor of marketing at the University of Dallas, about – you guessed it – the city of Shreveport, Louisiana. Linked to its sister Bossier City by the Red River, the third- and sixth-largest cities (respectively) are often referred to as the single, hyphenated unit, Shreveport-Bossier. Though they are separated they operate much like a single city would, and many companies find it beneficial to expand from one into the other or vice versa. 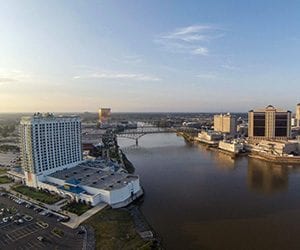 The riverfront of Shreveport and Bossier City.

This ethos has allowed Shreveport (and by extension, Bossier City) to maintain a sort of small-town feel despite its metropolitan status. There’s a certain pride in the city’s residents, one that reflects not just the rich history of Louisiana as a whole, but the culture and community specifically of Shreveport as well. Numerous movies and shows have been filmed here (including 2012’s Olympus Has Fallen, the 2006 Kevin Costner and Aston Kutcher movie The Guardian, and even the Salem and The Gates TV series), and it’s also where Elvis got his start, playing on the KWKH Louisiana Hayride show at the Municipal Auditorium.

“People want to capture that history,” Wysong says. “The people of Shreveport are proud of the homegrown mom-and-pop stores [and] restaurants…you want to support the local businesses versus the big chains.”

At present, Shreveport is in the middle of a renewal of sorts. In 2011, under Executive Director Liz Swaine, the Downtown Development Authority (DDA), enacted a new campaign to revitalize the downtown – the effects of which have been noticed by many Shreveportians, including Wysong. Though he works for a Dallas-based organization, Wysong made a conscious decision to live in Shreveport when he first moved there six years ago. At that time, he says, some parts of the downtown were in disrepair. “All these buildings are so cool, but they [were] all boarded up,” he says. “But now you’re starting to see all sorts of businesses coming into downtown, refurbishing and rehabbing some of these great older buildings.”

In addition to renovating and filling empty real estate, the DDA also has plans to transform the Sportran bus terminal into a “circulator hub,” with three buses that will provide constant transport throughout the downtown area.

“Downtown is where we started. If you have a strong, vibrant, opportunity-filled downtown, it means the rest of your city is growing as well,” Swaine said in a recent interview with SB Magazine. “We have an authenticity in downtown Shreveport that really resonates in people. They love hearing the stories of how a building came to be, the events that came before them; it grounds us in a place and that’s why it is so very important.”

Meanwhile, economic growth in Shreveport has continued to strengthen its role in the cultural and commercial capital of the region where Louisiana meets Arkansas, Texas, and Oklahoma, and further cement its growing reputation as another “surprise” tech hotspot. Personal finance company WalletHub, for example, released a study in 2015 that ranked Shreveport as the best place to start a business out of 150 of the United States’ most populated cities. Shreveport scored high in several areas important for startups, among them office space affordability (where it’s ranked 10th in the nation) and skilled workforce availability (where it’s ranked 19th). 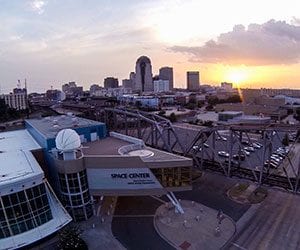 Sunset over the Sciport Discovery Center.

In the short time since that study was released, Shreveport-Bossier has continued to invest in the value of their respective workforces. Take the Cyber Innovation Center (CIC), for example. Founded in 2007 in Bossier City, the CIC was started with one goal in mind: to improve the number of people entering the workforce with the skills necessary to go into jobs in cybersecurity. To do that, the CIC developed a cybersecurity education curriculum that extends into middle and high schools to help to address the problem colleges and universities have of too few applicants with the necessary foundation for the more advanced cybersecurity career paths.

Ten years later, the curriculum is in use in all 50 states, and the CIC appears to be making an impact. The number of qualified students has risen from 230,825 in the 2014 fiscal year to 1,340,702 in 2016, and this has translated into a 39% increase in enrollment in cyber-related programs and a 30% annual increase in the enrollment of Computer Science and Cyber Engineering degrees. The program’s success has also started attracting the eye of several large companies in the software development sector, including CenturyLink and IBM (among others).

For some, like communications company EATEL, it’s a combination of opportunity and history. Already boasting 80 years of presence in Louisiana, EATEL said in a Q&A that “investment in Louisiana is a value of the family owned company.” With already established space in Bossier City (“we were already in the Cyber Innovation Center in Bossier City as renters…[but] we wanted something we could own”) investing in downtown Shreveport was an easy choice for EATEL. The company’s new 87,000-square-foot Tier III-rated data center brings world class hosting, colocation, and backup capacity – along with 50 new jobs – to the heart of Shreveport’s central business district. Being an anchor tenant with room to grow further exemplifies EATEL’s commitment to the area.

“Shreveport will be a good destination not only for those looking to learn the tech trade, but also for professionals who left their hometowns,” the company said. “With facilities like the new data center…there will be more of a place for prodigal tech professionals back in Shreveport and Louisiana.”

For others, like the government information technology company CSRA, the decision to define a presence in the area is simply because modern Louisiana offers such great opportunity. Located across the river from Shreveport in Bossier City proper, CSRA built and opened their new state-of-the-art Integrated Technology Center (ITC) in November of last year. The ITC brought with it 800 new IT jobs and reinforced the message that the Shreveport-Bossier community provides access to the technology that capable workforce businesses need.

Beyond the opportunity for businesses is the affordable quality life that Shreveport offers to the people that have helped make it successful.

“The fact that there’s no traffic in Shreveport made it attractive,” Wysong says with a laugh. “But there are cultural things [as well]…it’s a slower pace of life, the people are not as uptight as they are in a bigger city.”

Minimal traffic aside, the city also features a variety of attractions and “amenities” that further improve the quality of life in Shreveport for residents and tourists alike. The city is home to more than 55 festivals and events, for example, including everything from the Independence Bowl, to its three local craft breweries, six casinos, and hundreds of local restaurants. 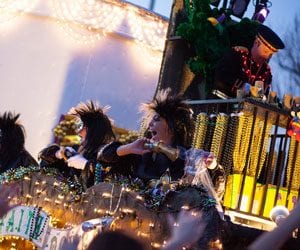 Some of the most popular festivals that best show off the community’s personality and love for life are Cork, a Red River win event, Battle of the Gumbo Gladiators, and Brew, a premier beer festival. If the music scene is more to your taste, check out the Highland Jazz and Blues Festival, or take in the sights and sounds of the State Fair of Louisiana and the Mudbug Madness Festival. Of course, you can’t mention Louisiana without mentioning Mardi Gras, whose seven parades are both exciting and family friendly.

Shreveport is also home to a lively arts scene, which includes several art galleries and museums, including Artspace, the Louisiana State Exhibit Museum, the R.W. Norton Art Gallery, the Sci-Port Discovery Center and IMAX-domed Theater, and, the most recent addition to this list, the Shreveport Aquarium, which is set to open summer 2017 and will serve as a monument of sorts to the city’s commitment to sustainability.

“It was a conscious decision to transform the iconic Barnwell Center into a LEED-certified building,” said Jake Wood, a spokesperson for the aquarium. “Not only is it the responsible thing to do, it is the right thing to do, for a multitude of reasons…Not only does it create a savings when it comes to energy resources, it is more efficient and cost-effective even in the not-so-long term.”

With a combination of excellent technology infrastructure, great amenities and an affordable cost of living Shreveport is one of those unique locations that allows you to live there and still work virtually anywhere. Living in Shreveport and working remotely is a convenient and viable option, no matter what business you’re in. 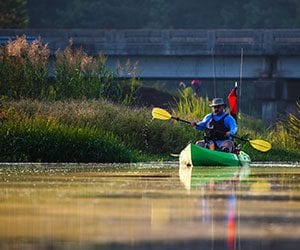 Life in Shreveport is relaxing compared to other metropolitan cities.

Shreveport has what it takes to talk the talk and walk the walk, providing a family- and business-friendly environment absolutely steeped in Southern hospitality. And as more companies become aware of Shreveport’s value, the city will only continue to grow. As Louisiana Governor John Bel Edwards said in a press release after the opening of EATEL’s datacenter in 2016, “Shreveport and Bossier City are blazing a new technology corridor that extends to Louisiana Tech University in Ruston, CenturyLink in Monroe and to other points along Interstate 20.”

“New technology corridor” is right. And Scott Wysong agrees. His voice is almost wistful as he thinks about the future of the city that he’s made his home. It’s clear that after only six years, he feels just as much a part of the community there as the lifers.

“I think Shreveport has got a lot of history, and if [they] leverage some of that, along with some creativity,” he says, “if they can just kind of capture their niche, maybe use technology, it’s [going to become] a cool place to live.” At this point that seems like more of a promise than a guess; clearly this is only the beginning for Shreveport.