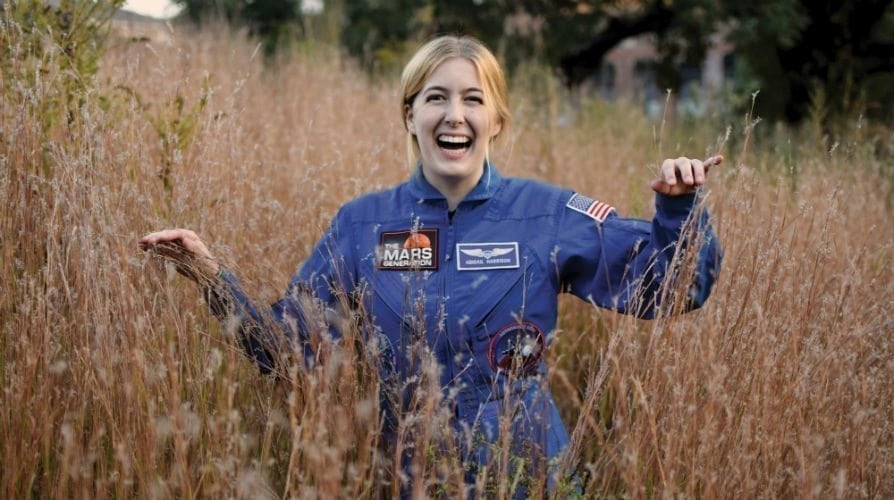 Like many children, Abigail Harrison wanted to be an astronaut. In fact, she wanted to be the first astronaut to land on Mars. However, unlike other children, Abigail (known as Astronaut Abby) began working to make her dream a reality early on. At the age of 13, she began speaking publicly about her aspirations, all while interviewing and building relationships with astronauts. Eventually, at the age of 18, Abby founded The Mars Generation, a nonprofit supported by an advisory board of astronauts, engineers, and scientists. The goal of the organization is to educate and inspire both children and adults about space exploration and STEM education.

Since the inception of The Mars Generation, Abby has given TED Talks and has worked hard to inspire a younger generation to dream big.

In this interview, we talk with Abby about her own inspirations, the steps she’s taken to get closer to her dream, and the importance of STEM education.

Innovation & Tech Today: What first inspired your dream of being the first astronaut on Mars?

Abigail Harrison: As a kid, I knew that I wanted to be an astronaut, wanting to go to Mars didn’t come until a couple of years after. I remember that first desire to go to space.
One of the things that inspired wanting to go to Mars was that Mars is a celestial object that, as an amateur astronomer, is very easy to find … a dramatic object to look at and to think about. So it captured my interest right away as a five-, six-, seven-year-old who was looking at the night sky.

I&T Today: Since then until now, what steps have you taken? What does this process look like for you to achieve your goal?

AH: So right now, I am a student at Wellesley College. The most important part of becoming an astronaut is truly focusing on a strong educational background and so I’m pursuing an undergraduate degree, a double major in Astrobiology and Russian.

I’ve also studied Mandarin Chinese and hope to pursue a handful of other languages that I think will be important in the future of space exploration. I also am a scuba diver with advanced certifications and am continuing to train in that, because that’s a very common way for astronauts to train for microgravity missions. I’m currently working towards earning my pilot’s license, which is, once again, another thing that’s important. It’s not necessary to apply to be an astronaut, but it’s definitely a positive.

And then the final piece that I think is important is honing the ability to do science communication. So utilizing things such as public speaking, writing, and even using social media to excite people about what is happening in the world of science or space and to truly be able to communicate to the public about things that they may not have a background in … The most important thing that we can do with not only science but especially space travel, is making sure that it makes its way back to everyone.

I&T Today: Why do you think that space exploration is so important?

AH: I would break it down into three primary reasons … And the first one is that it’s who we are. Part of what makes us human is our desire to explore, our need to look around the next corner, to peak over the next hill, to cross oceans, and to continue to just push our boundaries and look farther. That is an integral part of what humanity is.

I&T Today: A lot of the work you do revolves around inspiring younger generations to think and dream big. Who are some of the people who inspired you and allowed you to dream big?

AH: When I was probably 13, Dottie Metcalf-Lindenburger, who was a shuttle astronaut, sent me a photo in the mail because someone had reached out to her and said, “You know, there’s this girl who’s interested in space and wants to be an astronaut.” And so, she sent me a photo where she’d written some really kind words about continuing to pursue my dreams. And although it was a dream that I fully believed in, it’s still hard to pursue something like that until it becomes a reality and seeing women in that field was really important to me.

I&T Today: You’re an advocate of incorporating art education into STEM. Why is that so important?

AH: The reason that I think that arts are so important in STEM is because you can never really separate the two, and you shouldn’t strive to. All good science, when you look at it, has insane amounts of creativity involved. The jumps between ideas that you make and the ways that you facilitate research by creating new things and methods that have never been done before, that all directly ties back to arts. Because art is what allows you to grow those abilities and really hone that skill, which is vitally important not just in science, but in math and engineering, and really every part of that field that you can imagine.

It’s a really important thing to be a well-rounded person in my opinion, especially if you’re going after a very niche goal, a very big goal. And so … advice that I give to other students who ask me about going after a dream like being an astronaut is … you have to make sure to develop yourself as a whole person so that you don’t burn out at any point along the way. And arts are a vital part of doing that, because if you’re only, for 20 years, focused on science or math, that will take its toll, and it will wear you out versus if you’re dividing your attention, focusing mostly on how this will impact your future and what you can do for that, but also spending time to connect with what it means to be human through the arts, that’s equally as important and a long-term goal.