Whether it be Sigourney Weaver’s portrayal of Dr. Grace Augustine in the 2009 hit Avatar or Hidden Figures’ acclaimed depiction of the female African-American mathematicians (Katherine Johnson, Dorothy Vaughan, and Mary Jackson) who played a vital role in NASA’s early years, women, more and more, are being represented as scientists and innovators. Most recently, Czech actress Klára Issová had the opportunity to characterize famed physicist and chemist Marie Curie in National Geographic’s new TV docudrama Genius.

Marie Curie is best known as the first woman to win a Nobel Prize, but her achievements do not stop there. She was the first person and only woman to win the Nobel Prize twice and the only person to win the Nobel Prize in two different sciences (Physics and Chemistry). Not only did her work contribute to the advancement of science – coining the term “radioactivity” as well as discovering two elements, polonium and radium – but she also contributed to the advancement of women. Combatting poverty, sexism, even xenophobia, Curie was able to overcome obstacle after obstacle in order to break into and succeed in the male-dominated field of science.

Thus, Issová, who has been featured in the TV series Legends, as well as the NatGeo TV movie Killing Jesus, was faced with the difficult task of portraying Curie. We had the chance to sit down with Issová and find out exactly what it takes to enter the mind of a genius. How does one portray an individual who beat so many odds in order to become an internationally renowned scientist? Issová said that she “understood why [Curie] became who she became. How…she was that strong and could overcome so many challenges in her life.” 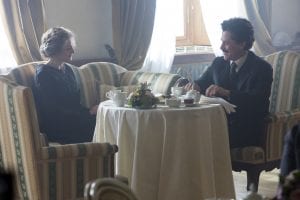 “Not everyone could study in this time,” Issová explained, “There [were] different rules.” But, she continued, Curie “just decided to focus on her work, on her sciences, on her family, and that’s it. And she [didn’t] care what other people [said].” That’s what it took for Curie to succeed. When she was rejected from Kraków University because she was a woman, she kept pursuing her studies. While being ridiculed in France for being a foreigner, she kept pushing.

The obstacles she faced would not hinder her genius from moving forward. Issová shared one anecdote on Curie that encompasses her ingenuity and thinking. When she was to marry Pierre Curie, “she asked for a black-colored wedding dress so she could use it later on in life. A fascinating detail,” Issová continued, “thinking about everything and trying to save money because they were so poor, so she asked for a black dress.”

Based on Walter Isaacson’s biography, Einstein: His Life and Universe, Genius follows the life of Albert Einstein and those he crossed paths with. The series is produced by Ron Howard, known for Arrested Development, as well as A Beautiful Mind, Apollo 13, and Rush.  According to Issová, Genius shows “what surrounded Albert Einstein, how he became what he was, who inspired him, what he went through, what were his obstacles, and so on.” You can see Issová as Marie Curie this upcoming Tuesday, May 23rd, at 9/8 C on National Geographic.