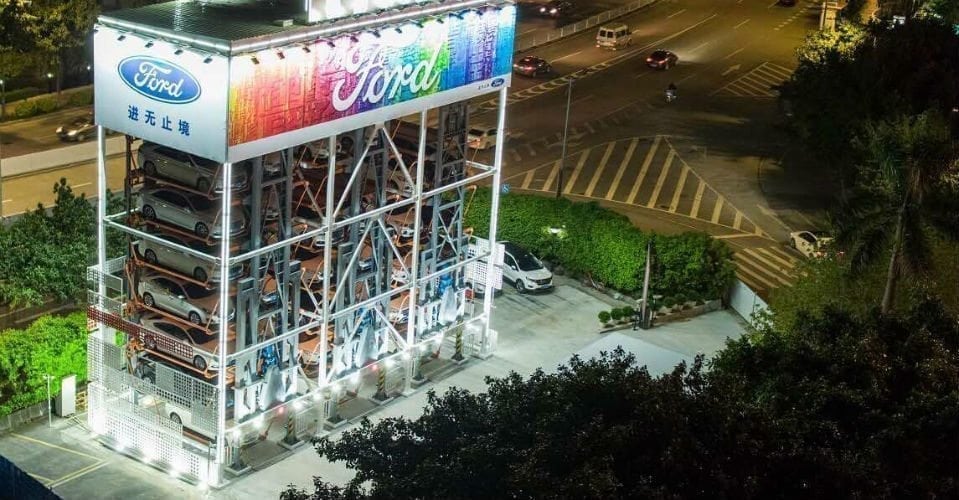 Standing at multiple stories high and housing dozens of vehicles, the Super Test-Drive Center unveiled itself this week in Guangzhou, China. This giant car vending machine comes out of a partnership between Ford and Alibaba which was formed two years ago. The huge facility has potential to completely revolutionize the car buying process. As it currently stands, consumers can purchase a car using just Alibaba’s Tmall app. Users select the car model they want, put down a deposit through the app, schedule a pickup time, and finally snap a selfie so the vending machine can recognize them. The process is quick, taking little more than 10 minutes.

The vending machine also provides 3-day test drives; that is, if you have an Alibaba credit score of 700 or above. Alibaba’s credit ranking system, Zhima, also has links to the Chinese social credit system, which monitors citizens’ behavior. As Alibaba told The Verge, users with a Zhima score below 700 will have to pay an additional fee.

In addition, the system will also be connected to Alibaba’s ecosystem, monitoring user’s past activity to provide potential customers with discounts and incentives. The data provided by Alibaba would actually be able to give deals based on a person’s perceived lifestyle. However, this isn’t the first time the world has seen car vending machines. Carvana has car vending machines like Super Test-Drive all over the U.S. In their case, users are able to digitally explore their collection of certified used vehicles. Carvana also lets users purchase their vehicle via the web before picking it up at one of the many Carvana vending machines. The company even utilizes novelty coins that the customer uses to operate the vending machine.

With these car vending machines, not only is the process made easier for customers, but dealers would also save money in the long run on labor costs. Some may prefer dealing with a person face-to-face when making the large investment that comes with purchasing a car. Then again, who isn’t intrigued by a giant car vending machine with cat ears?