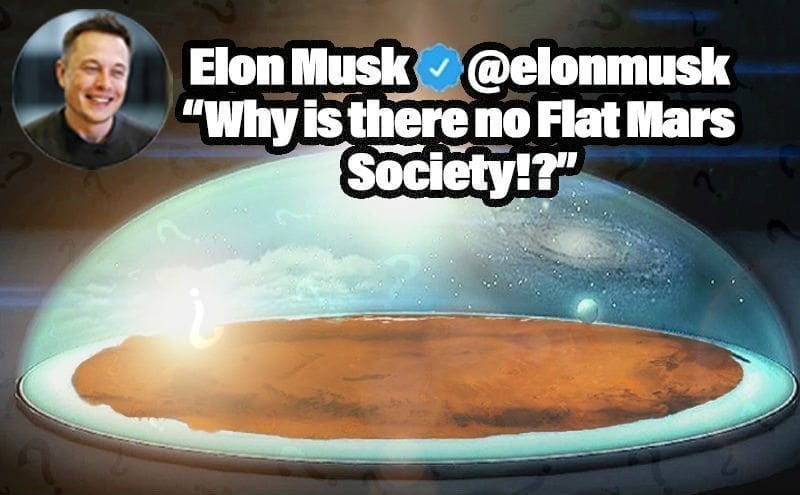 Elon Musk Just Tweeted About Flat Earthers. When Will It End?

This article is part of the problem.

I’m about to talk about Flat Earthers, which is exactly what they want. Indeed, the lion’s share of Flat Earther awareness can probably be chalked up to soft looky-loo journalism where the crux of the story is the author’s own shock and disbelief: “Oh, no! Can you believe this exists? Can you believe this happened?” A sign of our Tweeting times, I guess.

Thanks to members of the desperate media (you’re welcome), and now tech tycoon Elon Musk (see Tweet below), millions have been exposed to a movement that should have probably never graduated from the basement.

Let’s get this out of the way. For the blissfully unaware, The Flat Earth Society is a largely internet-based rebellion against the scientific consensus that our planet is spherical. Sinking in…

The group has been around since the 1950s, but has been revitalized over the last few years by the web’s hearty enfranchisement of idiocy – with blogs, social media, and video platforms imbuing any person competent enough to purchase a GoDaddy URL with the potential to broadcast their enlightenment on a global scale. I’m talking, of course, about the fake news dilemma.

To complicate things even further, you have journalists and public personalities now faced with a catch-22. Do I give this insanity air time? (see the Megyn Kelly vs. Alex Jones debacle). Or do I ignore it completely? There are thickets on both sides. If you ignore them, you risk the lie spreading unchecked by good old evidence and reason. And, if you do broach the topic, you risk exposing more people to it, which increases both the chance that they’ll be sucked into the movement and the chance that they’ll become another statistic in the suicide mortality rate after hearing that there are people making money on the internet by reciting dialogue from a Christopher Columbus cartoon.

There are also reprisals to consider. The online troll community, as so many have learned, is nothing to be trifled with (please send all of your hate mail to my assistant editors. In fact, while attempting to collaborate with a university on a story on conspiracy theories in the classroom, I was once told that the the flat earth topic was “too hot to touch” for this reason.

Elon Musk has 15.6 million followers on Twitter, and his Tweet today has been Retweeted over 8,000 times, as this is written. The fact that the movement has reached a level of awareness where one of America’s favorite geniuses could spend even 10 seconds writing a joke about it is staggering – truly a testament to the internet’s power to disseminate absurdity, for good or ill. For every comical depiction of Nicolas Cage as a Disney princess, there’s also an earnest depiction of the world being balanced on the back of a giant space turtle.

What do you think? Feel free to join the conversation on social media.