An Inside Look into Disney’s New VR Venture

Now you can interact with Disney’s CGI video game characters in virtual reality.

Location-based virtual reality company The Void continues to partner with Lucasfilm’s ILMxLab to push multiplayer VR experiences further into “hyper reality.” Their latest collaboration – hot on the heels of the critically acclaimed Star Wars: Secrets of the Empire – is Wreck-It Ralph Breaks VR, which brings characters, games, and environments from the Walt Disney Animation Studios’ film franchise into a four-player cooperative VR experience that can be played at Disneyland, Disney World, and other location-based venues around the world. 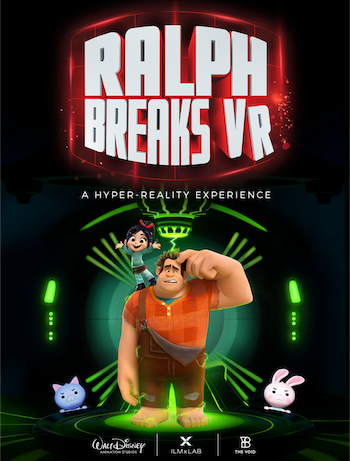 Ralph is the first of five new VR experiences based on Disney properties, with a Marvel Universe VR experience announced for 2019. Each of these collaborations is being developed in tandem with ILMxLab and Disney across studios in San Francisco, Los Angeles, and Salt Lake City.

Curtis Hickman, CEO of The Void, said each of these projects is being designed with veterans from the worlds of Hollywood, visual effects, video games, and virtual reality. And, given the theme park attraction nature of these 20-30 minute experiences, they’re also being designed for repeat play.

“Ralph is a good example of that because obviously the world of Wreck-It Ralph has everything to do with games, and now the internet, so there’s a great potential for replayability and playing off of those themes within the Ralph VR experience,” Hickman said. “So those are definitely things that we’re playing with from the Ralph experience, especially.”

Mark Miller, executive creative producer from ILMxLAB, said that Wreck-It Ralph’s world was created using video game technology and is completely computer-generated, which allowed the team to jump right in and use some of the assets from the Disney film.

“With a little bit of work, it gives us a chance to do something different for players to experience inside of this world,” Miller said. “In Secrets of the Empire, we were really concentrating on putting you in a Star Wars world, and that’s a very real concrete place that fans could really get into. And now we get this really fun chance of putting you in an animated environment that no one’s actually ever stepped into. And it’s a whole different feeling. The first time that we all stepped in it was amazing … Just being in that new environment that’s like nothing you’ve ever been in before.”

After spending time establishing a technology and workflow pipeline across companies for the first Star Wars VR experience, The Void, ILMxLab, and Disney have been able to hone in on what works best for each intellectual property.

“When we explore a VR experience, we start by looking at the themes and the wish fulfillment for that realm that we’re trying to take you to,” Hickman said. “With Ralph we looked at a lot of those different themes, especially around gaming, and we play off of those things in different ways for the Ralph experience. There were opportunities within The Void to do things that feel both competitive and cooperative by their nature.”

With a huge library of gaming references in the original Wreck-It Ralph film, spanning Pac-Man to Halo, jumping into this VR experience was a lot of retro fun for all involved.

“We certainly talked about a lot of old retro games and everybody who has come here from the games industry and from film and animation have their memories,” said Miller. “We did a lot of brainstorming and there was a lot of geeking out over the possibilities of what we could pull in from the games referenced in the first movie and the second.”

With Ralph currently wrecking the internet on big screens and VR inside The Void, there’s plenty of retro gaming fun to go around until the Marvel VR experience, which hasn’t been titled or detailed yet, is added to what Hickman calls the IMAX of VR – a location-based VR network that offers fans the opportunity to step into movie worlds from across Disney’s vast library and play alongside friends.

An Inside Look into Disney’s New VR Venture