We may be stuck indoors, but that doesn’t mean we can’t celebrate Earth Day! In fact, being deprived of the outdoors, now might be the perfect time to reflect on how much we truly need to care for our natural surroundings.

We’re kicking off this week with an interview with Dereck and Beverly Joubert, two National Geographic Explorers who will be participating in National Geographic’s Earth Day event, Born Wild: The Next Generation. The Jouberts are award-winning filmmakers based in Botswana. Their conservation work centers around key wildlife species, with a focus on large predators. 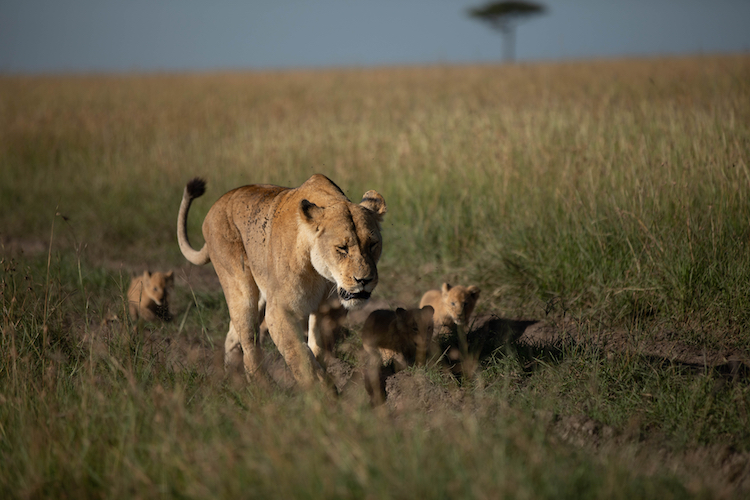 A mother lion and her cubs walk through the plains of Masai Mara, Kenya. (National Geographic)

Innovation & Tech Today: We’re trying to get kids to be excited about going into STEM careers, space, science, conservation. What inspired you guys?

Beverly Joubert: Currently, what inspires us is not necessarily the way we started. We started by being inspired by the beauty and the wonder and being intrigued.

Now, sometimes it’s that driving of the anger and the atrocity and we realize that if we don’t work harder, faster, more effectively to reach a wider audience, we are going to lose many different species and vast tracts of land that are the vast pristine places in Africa. I mean we still obviously love spending time with the animals that we have over thirty-five to forty years, but sometimes the atrocities are driving us harder in trying to be more effective.

DJ: Either way, it’s passion, isn’t it? Whenever we speak to young people, I ask them what they are really passionate about and I think that our collective task is to instill a passion, no matter what, whether it’s playing the guitar, or being an Explorer, or understanding wildlife for science. 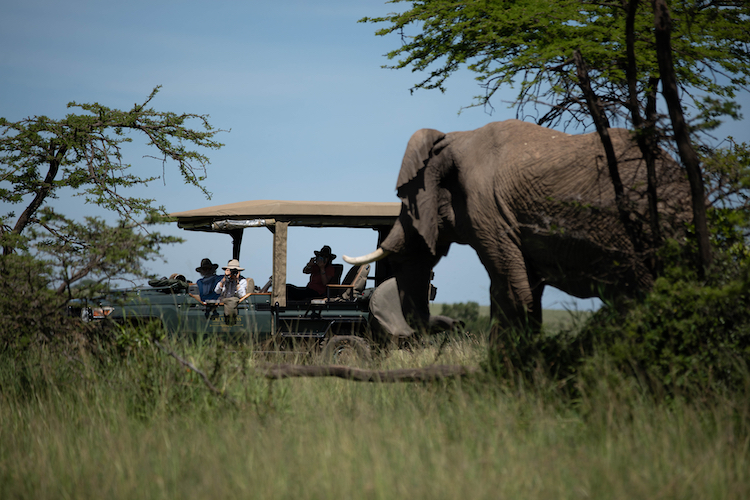 Dereck and Beverly Joubert and Juju Chang observe an elephant from a Land Rover. (National Geographic)

I&T Today: Why do you think that people love animals so much and how can we use that to get them excited about conservation and climate change?

BJ: Animals make us feel good, and we have to look and say, why do they make us feel good. and I think it’s because they truly love unconditionally. Love is the driving force for the planet – if we would allow it to be. Sometimes, I think there’s way too much hatred on the planet, but I find that when I am out in the wilderness areas, it is truly soul food for me. It replenishes my soul; I feel calmer, I feel much more relaxed. And it allows you to then start to reflect and think about what is important in life. I know Carl Jung said Africa was the one continent that still had a soul and I believe he was talking about this incredible abundance of wildlife right through Africa.

Love is the driving force for the planet – if we would allow it to be. – Beverly Joubert

DJ: I also think that it’s an unexpected mirror, in that we see animals running and playing like us. We expect to see other people running and playing like us, but when we see lions running and playing and enjoying it, we’re surprised by that. It’s a mirror to us. They get angry, they have territories, they play, they bond; they are pretty much like we are. I think one of the things that we are hoping to come out of this Born Wild special is to narrow that gap even more and say ,they’re not just like us, they are very much like us. Look into the eyes of a cub running around and stumbling and enjoy it on one level because it’s cute, but understand that there’s a soul there, there’s a passion, there’s compassion, there’s empathy, there’s trust, there all of these things – all of those things that we often think are uniquely human are not.

I&T Today: They even use tools.

DJ: They use tools and we’ve found more recently that the tool range is not just chimpanzees but it’s in crows.

In fact, what’s nice about it is the more we find out about animals and the more science we applied to what we’re finding out, the less reason we’ve got to be arrogant as a species.

BJ: It really is the future generation that is hopefully going to help us solve many of the problems. We do have to think about renewable energy, removing fossil fuels. We have to think about the way that we’re going to release all the pollution – both in the water and in the atmosphere. It would be fantastic if the youth, who are already brilliant in the technical IT side, could come up with great solutions. I’m sure they’ll be able to be implemented on this planet…

DJ: It was no more than two or three years ago that two guys researching blood samples of elephants discovered a cell within elephant blood that prevented them from getting cancer. These big black shaped things with a massive surface area, walking in the sun all the time, you’d imagine they would get cell cancer. Now we now know that they have mechanisms to prevent them from doing so. 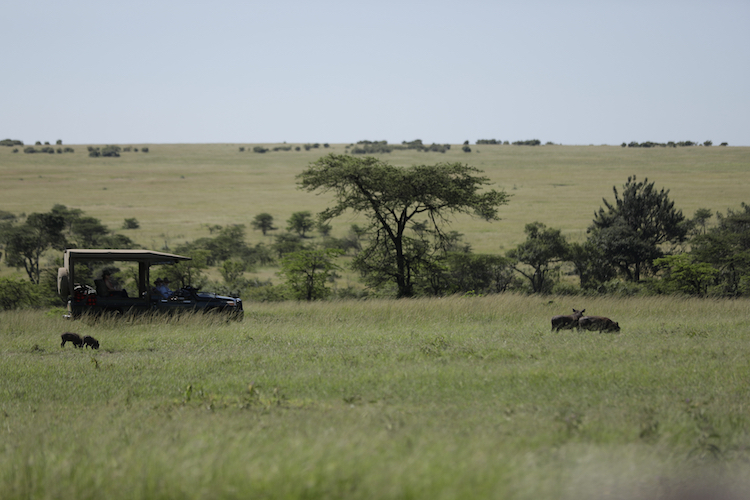 The crew observes warthogs from the Land Rover. (National Geographic)

I&T Today: How do you see technology being used in conservation?

DJ: This is a huge rock in the mix of this right now. We have reserved protected areas right now, in particularly in Botswana and Zimbabwe. We’re looking at about 1.6 million acres that we need to protect. Now, we can do that in a number of ways. Technology would be guns and binoculars and that kind of stuff. But we’re going way beyond that, where we using conservation technology to look at this. Shock detection technology where gunshot happens and you get triangulation on that and you can pinpoint exactly where that gunshot went off, although that’s too late then – they’ve already shot the animal.

So we are working with National Geographic right now, looking at AI and using basic camera images that can tell whether [something on camera is] an elephant or pangolin or man. And if it’s a man, the flag comes up.

You can bring in more technology, like a helicopter or a drone. I think it’s lovely that there’s a combination of technology and old school stuff, where a drone can identify identify positively that there is a group of humans coming in and follow them, and at the same time, the vinyl record version of this is somebody can release dogs, tracker dogs, start getting these guys on the run.

The biggest thing about poaching is you want to prevent them from poaching and that’s where technology comes in basically. I don’t think we’ve even scratched the surface of what it can do for us.

BJ: Absolutely. And then if you’re looking at the film side, there’s always a new invention that are needed to be able to film microscopics or to get into a den and some of the systems are still clumsy and invasive to the animals. And so if you can come up with systems that are not going to be invasive to animals, that would be fantastic. We try and use everything out there, from shooting from drones, shooting from a helicopter. Everything needs to be non interfering to wildlife.

DJ: Just back on the other stuff; on the hard conservation stuff. We’ve got technology now where we can embed an implant into the shoulder of a rhino and one in the horn and they talk to each other. In fact, they stay asleep, all the time, until the two transmitters separate by more than two meters, which means the animals being killed and the horn’s heading off. Then it wakes up, sends off all sorts of alarms and then we can track that horn as it goes off.

Author Bio: Charles Warner is the CEO of Innovative Properties Worldwide, a veteran-owned media company out of Denver, where he is responsible for overseeing the company’s many areas of specialization, including custom publishing, sponsorship sales, onsite activation, audience development, ad sales training, and branded content. Prior to IPW, Charles oversaw a Florida media company that produced over 300 high-end event publications for some of the most prestigious sports properties in the world, such as the PGA, NASCAR, LPGA, NCAA March Madness, NCAA college football, the Super Bowl, and the World Series. Charles has almost 20 years’ experience selling print and digital advertising in publications of all sizes. Throughout that time, he has developed a consistent track record of recruiting, hiring, and training media sales professionals who have gone on to have exemplary careers. 1n 2010, Charles created Ad Sales101 to simplify the process for selling print advertising, while speaking to salespeople all around the country. Training and motivating sales teams remains a passion for him today.