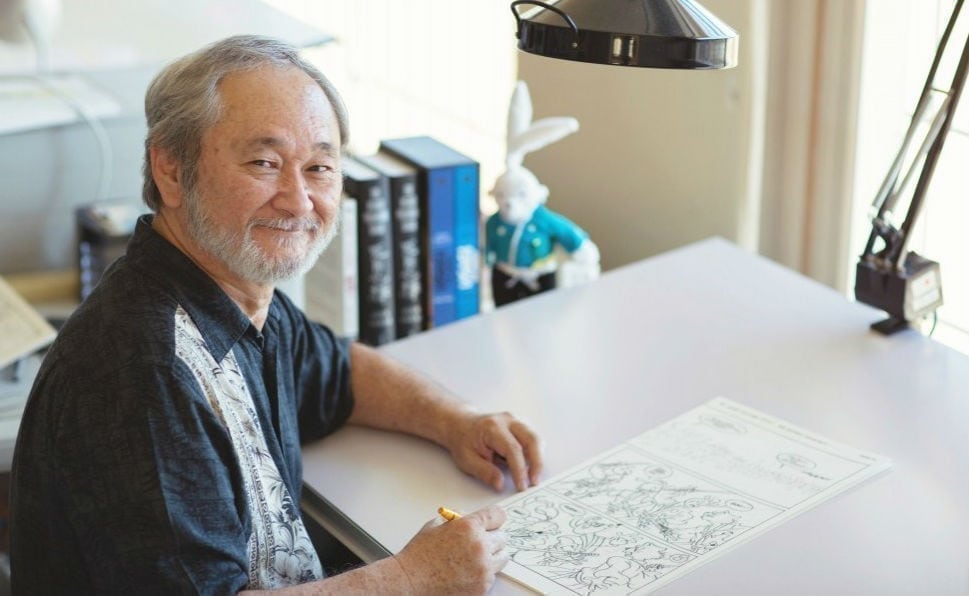 Creator of the iconic Usagi Yojimbo comic series, Stan Sakai was an ideal choice for our spring issue’s special feature on comic book creators. Sakai has been working on the series for over thirty years, and has seen his creation evolve over time from the original comics to the upcoming animated series. In this exclusive interview, Sakai discusses his inspirations and advice for the comic book creators of the future.

Stan Sakai: I grew up reading comics–both Western and Japanese comics–and, with an art degree in drawing and painting, it was natural that I got into the field. I did freelance artwork in Hawaii and when I moved up to California. It was through friends in the industry that I heard of someone in Seattle, Washington that wanted to publish a comic and was looking for short stories. I submitted a Nilson Groundthumper story which was published in Albedo #1. The next issue cover featured the first Usagi Yojimbo story. This was in 1984.

Stan Sakai: Since I write, draw, and letter Usagi Yojimbo along with owning the Intellectual Property, I can virtually do whatever I like storywise. Usagi Yojimbo is known to cross many genres and this is due to the freedom I have for creating a story when I am inspired by daily life, my travels, research, or past experiences.

For example, Usagi Yojimbo is switching to mini-series format starting with a brand new #1 issue in March for a seven part story arc. It will introduce the Hidden Christians of Japan and will eventually lead to an epic I’ve had in mind for a while. It was inspired in part by my recent trip to Kyoto where I visited the work studio of a traditional mirror maker, a designated cultural asset.  He still makes nickel-plated mirrors by hand, and showed us a secret mirror.  It looks and reflects like a regular mirror but, when a light is shone on it in a particular way, it reflects a crucifixion scene. It was a way for Christians to display their faith during a time when their religion was outlawed. As I mentioned, I’ve wanted to do a story on this topic for many years and have conducted extensive research on it. The experience presented itself with excellent timing.

I&T Today: Along those lines, what was the inspiration for Usagi Yojimbo?

Stan Sakai: The inspiration for Usagi Yojimbo was a real life samurai, Myamoto Musashi. He’s quite famous in Japan with books, cinema, and manga detailing his life and legend. I had wanted to do a story on Miyamoto Musashi and, while I was playing with character designs, I drew a rabbit with his ears tied up in a chonmage (samurai topknot). The aesthetic was striking and I’ve worked with Usagi ever since.

Stan Sakai: I visualize the story in my head. Pretty much like a movie. I consider the perspectives, the pacing, the dialogue, the setting, and play it all out in my mind. Once I’m satisfied with the general flow, I write it in my journal. I travel a lot, so I use this time to conceptualize and write out my story outline. I tend to write a lot on planes. Then, I sketch them out in thumbnail format. This also acts as my final script. Then I move onto penciling where I sketch out the comics in each panel, including the word balloons. I still do hand lettering, with pens, on the original art. Finally, I ink it using various pens and a brush.

As you can see, none of Usagi is digitally created. I love the craft of making comics the traditional way. The real secret is that I don’t know how to use Photoshop (jk).

Stan Sakai: The biggest change that I’ve seen is the internet.  Anyone can post their art online for thousands of people to see. It is so easy now for an artist to have his work seen, however, because there is so much stuff on the internet, it is difficult for an artist to have his work noticed.  The artist has to have a unique perspective, to be able to rise above the competition to be noticed.

Yes, technology has affected the process of comic creating. It has also led to a large selection of indie comics and self-publishing, which is nice to see. Online comics are becoming more popular due to the advent of the internet. However, I personally prefer books in hand.

Stan Sakai: Learn how to draw from life.  Many aspiring creators start off mimicking and drawing their favorite manga or comic characters. This skips all of the steps that those creators honed throughout their years before they started drawing comics or manga. Take art classes, do life drawings. You have to know how a body really moves before you can put it down on paper.  When you can draw real objects your composition, perspective, and realism are strengthened, which is a challenge among those that start off. Study directors you enjoy and break down how they tell a story visually – compositions, pacing, lighting, etc. This can transform your work and allow you to convey your story in a cleaner format. Remember, a picture is worth a thousand words and you don’t want your reader spending unnecessary time making sense of a panel.

I also would suggest a spirit of perseverance and humility. I’m blessed that I can make a living doing what I love. However, what goes unseen is the hours I have spent and continue to spend on my craft. When I first started out, I sought guidance from those more experienced than myself. It’s always hard to take criticism, but if you have the right attitude, it can really make a difference.

I put these two together because while you can be humble, sometimes your favorite creator can be in a bad mood and might be overly critical (we’re only human). Respect their opinion and insight, but always remember that YOU have a unique voice and it’s your story to tell. Don’t let anyone take that away and keep moving forward.

I&T Today: Is there a project you created that you’ve always regarded as your personal favorite?

Stan Sakai: I’m particularly fond of Kite Story that is currently included in Usagi Yojimbo Book 5: Lone Goat and Kid published by Fantagraphics Books. It required extensive research into the art of kite-making. I suppose as someone who has spent years honing my skills, it was fun to examine another artisan. Perhaps I sensed a kindred spirit among the kite makers and the way they honed their craft.

Another project is Senso, a story that takes place in Usagi’s future when Martians attack feudal Japan.  It was just pure fun and I could play with established characters in a way I can’t in the regular Usagi stories.

I&T Today: Do you have any new projects you currently have in the works?

Stan Sakai–Yes, as I mentioned before, I am working on a story arc involving the Hidden Christians, which will be available March 21st. We also are working on much more merchandise and interaction available on my personal website (www.stansakai.com). My step-son, Daniel, has been rapidly expanding our projects due to the increasing demand; much is courtesy of Usagi’s recent appearance(s) in the TMNT TV show aired by Nickelodeon. We recently discovered the might of the internet when we partnered with Playmates Toys to create the “Sakai Variant” Usagi action figure. It sold out in a rather intimidating fervor. Much of this is due to how well they designed the figure and the packaging was…spot on.

Perhaps most excitingly, I’m pleased to announce that Usagi was optioned by the international studio Gaumont; the oldest film company in the world (1895) with ongoing projects such as Narcos and F is for Family, but also kid shows partnered with Paul McCartney (High in the Clouds) and Kristen Bell (Do, Re & Mi). So far, I am impressed with the team that has been assembled. Other partners are Atomic Monster by James Wan (who to my delight, expressed personal interest in Usagi) who is the director of the upcoming Aquaman and directed Fast and the Furious, The Conjuring, and Saw. We are also partnered with my publishing company’s entertainment arm – Dark Horse Entertainment – who is currently working on the highly-anticipated Hellboy motion picture starring David Harbour (Stranger Things) and directed by Neil Marshall (The Descent, Game of Thrones).

In order to see our full comic book creator special, make sure to check out the spring edition of Innovation & Tech Today. And make sure to follow Stan Sakai on his official Twitter account.