Let’s be honest. Cleveland isn’t the place people think of when “technology” and “innovation” are brought up in the same sentence – Silicon Valley has dominated that head space for years, producing hit after hit in the consumer tech market. But times are changing (as they tend to do), and the city of Cleveland is becoming a burgeoning tech zone exploding with startups and homegrown talent across a variety of tech fields.

Tech heavyweights have already made sizeable investments in Cleveland startups. Explorys is a Cleveland based health data analytics company that is now a part of IBM’s Watson Health Unity, and CardioInsight, also started in Cleveland, is a non-invasive cardiac mapping system that is now a part of Medtronic. And while Cleveland has really started to make a name for itself wherever tech and medicine marry, it’s also grown in other areas too.

Through Tech Elevator, Cleveland is bringing more tech education to the area than ever before. As Cleveland’s tech zone has evolved, especially in the areas of medical tech and education, it has shown the nation that instead of being mocked or cast aside, it should be taken seriously. And as it continues to grow the rest of the nation will surely take notice.

The Cleveland Health-Tech Corridor (HTC) was founded in 2010 as a public-nonprofit collaboration between BioEnterprise, a business formation, recruitment, and acceleration initiative designed to grow healthcare companies and commercialize bioscience technologies; The Cleveland Foundation; the city of Cleveland; and MidTown Cleveland, a nonprofit economic development organization.

The Corridor currently spans 1,600 acres at the heart of Cleveland’s east side, connecting Cleveland’s vibrant downtown to its University Circle cultural hub. Cleveland’s hospitals and universities provide tremendous health, technology, and educational capital, allowing the HTC to take off as the prime location to develop partnerships in the health and technology sector.

Now, the HTC is a prime location for biomedical, healthcare, and technology companies looking to take advantage of close proximity to four world-class healthcare institutions, six business incubators, four academic centers, and more than 170 health-tech companies engaged in the business of innovation.

The HTC offers companies everything they need to grow and thrive – entrepreneurial support services, thought leaders at academic and healthcare institutions, a community of like-minded innovators, venture capital funding, a highly skilled workforce, local manufacturing capacity and expertise, and a commitment from the public sector to help small businesses expand.

Plus, with the addition of 100 gigabit Internet access from OneCommunity and the City of Cleveland, companies in the HTC have access to the next generation infrastructure that gives the city a competitive edge. This infrastructure enables companies to share medical images in milliseconds, making it easy to transmit and analyze remotely; accelerate the pace of R&D with instantaneous connection to massive data sets; eliminate barriers with next generation video conferencing; and catalyze the mining of big data.

The HTC recently launched a multi-million-dollar investment and attraction fund that provides financial capital for businesses that are wanting to get their projects off the ground and are willing to relocate to the district. Companies seeking investment from the fund must have a unique idea, have a large ($1 billion+) addressable market, and demonstrate excellence in their field. 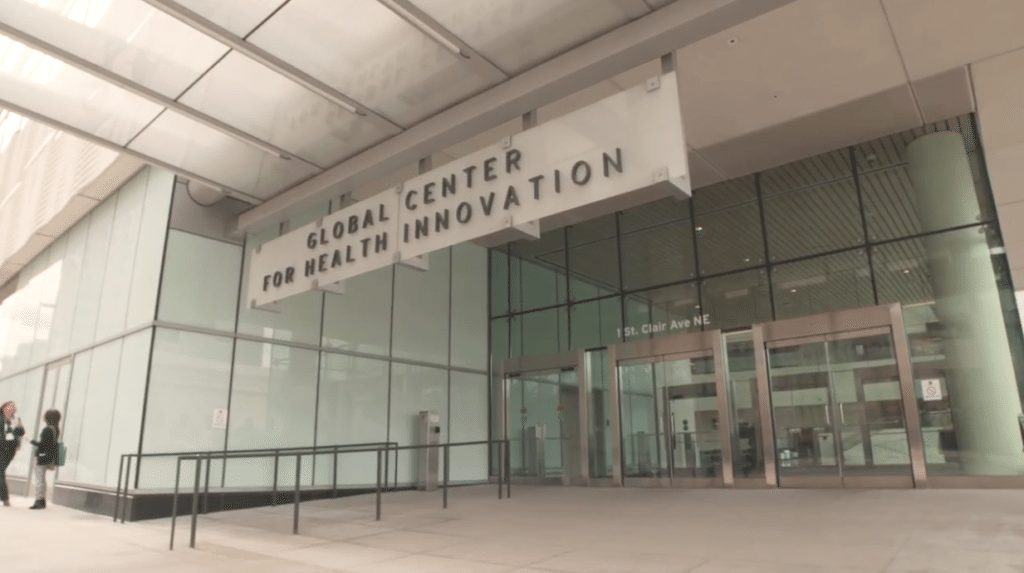 HTC Director Jeff Epstein believes the fund can bring even more innovators to the area. “With this fund, we are able to offer millions in investment to companies with extraordinary promise, whose successes will have a domino effect in the area. Because of the diversity of companies within the HTC, businesses are breaking down traditional barriers, and the results are breakthrough ideas from unique collaborations.”

Cleveland is a now a leading location for biomedical innovation and a hotbed of global health advancements. More than 700 companies and world-renowned clinical, research, and educational institutions – including Cleveland Clinic, Case Western Reserve University, and University Hospitals – create a robust biomedical industry in the up-and-coming Midwestern metropolis.

Since 2002, more than 390 biomedical start-up companies in Cleveland have attracted more than $2 billion in public and private funding. Cleveland’s clinical and research institutions collaborate with biotech and health IT companies to the tune of nearly $700 million in annual grant research. From detecting one of the deadliest forms of prostate cancer at an early stage to performing the nation’s first uterus transplant, Cleveland is advancing healthcare innovation each day.

Now in clinical trials at Cleveland Clinic, a tiny cardiac pacemaker (10% of the conventional size) is implanted through a small incision in the groin and delivered to the heart – with no connecting leads, scars or lumps in the chest. Cleveland Clinic researchers have also developed a new app that uses an iPad’s built-in gyroscope to help identify concussions faster and to help track recovery. It’s already being used across the nation by universities, high schools, and professional athletes.

University Hospitals’ scientists invented biochip technology that can detect the “stickiness” of red blood cells and predict a sickle cell flare-up before it happens. Faster treatment means less pain and fewer complications for patients. They are also working with Surgical Theater, a leading Virtual Reality and Image Guidance software company headquartered in Cleveland, to allow neurosurgeons to “fly through” a patient’s anatomy and perform complex operations in virtual reality before making the first incision.

And scientists at Case Western Reserve University are enabling future physicians to learn anatomy and solve problems textbook-free with the help of IBM’s Watson and Microsoft’s HoloLens headsets that can manipulate life-size holograms of the human body.

Medical innovations such as the device that allowed a paralyzed Christopher Reeve to breathe and the first successful total face transplant captivated the world.

The city is a desirable destination for patients seeking new ammunition against cancer, novel ways to strengthen a weakened heart, and treatments for neurological afflictions. More than 70,000 people a year travel from nearly every state and 180 countries to Cleveland for healthcare.

More than 170 tech companies are growing and thriving in the HTC – a stark contrast to the 1970s “when pollution was an issue, the steel industry was in decline, and retailers were leaving downtown,” says Chmura Economics CEO Christine Chmura, PhD. Dr. Chmura grew up in Cleveland and now has a branch of her economic consulting business in the Playhouse Square district to draw young talent settling in the urban center. “I love coming back to Cleveland for meetings with our staff…When I walk around the downtown area now, I can see the growth and feel the energy,” she says.

Many of the greatest tech companies in the HTC are pioneers in the medical tech industry. Cleveland HeartLab is a premier cardiovascular disease management company with a comprehensive array of proprietary tests focused on early detection. The company holds over 20 issued and 30 pending global patents and multiple awards. Explorys is a health data analytics software company acquired by IBM with software that ties together data from all areas of the healthcare system. Fifteen percent of the U.S. population has its health data handled by Explorys. “Explorys was developed in conjunction with Cleveland Clinic around technology designed to utilize big data to help drive better patient care. Thanks to IBM, we are thrilled that the company is going to remain and grow here in Cleveland to contribute to Northeast Ohio’s focus on healthcare business development,” said Toby Cosgrove, M.D., President & CEO of Cleveland Clinic.

Other med tech success stories include Abeona Therapeutics, which develops therapies for rare genetic disorders. Dallas-based PlasmaTech Biopharmaceuticals acquired the company, but moved its headquarters to Cleveland and is now building a state-of-the-art manufacturing facility in the HTC and hiring local employees.

It’s companies like Abeona Therapeutics that Dr. Chmura feels can continue to revive Cleveland. “It’s going to take some time to replace the well-paying jobs in the Cleveland metro area that were lost with the decline in manufacturing over the last two decades,” she says. “The health care industry added over 2,000 jobs in the year ending with the first quarter of 2016 and that industry pays an average annual wage of $62,280 compared with an average $48,871 for all industries in the metro area.”

The med tech powerhouses are recognizing Dr. Chmura’s belief that “it’s a lot easier to attract and retain the type of highly-skilled workers we need…in a vibrant growing region that also has a strong quality of life.” Cleveland offers such an environment, and businesses are noticing. Chmura Economics and Analytics has “grown from a staff of three in Cleveland five years ago to a staff of 14 with plans to continue growing.” The company has also “just completed a remodel of [its] building in Cleveland to handle [its] expected growth,” Dr. Chmura explains.

Cleveland is poised to house the next pillar of tech growth. As Dr. Chmura says, “Our growing groups of data scientists, economists, and statisticians in Cleveland are extremely efficient and nimble” – ready for their careers to grow along with the city.