No piece of media has ever made me feel the way Black Mirror does. The deep sense of discomfort and realism that each episode brings is unprecedented, providing disturbing storylines that are just outside the realm of possibility. What Black Mirror does so well is how they portray people who become so connected to technology that it leads to their ultimate downfall. The fourth season of the show came out last week and I proudly binged all six episodes in one night. From worst to best, here are my pedestrian thoughts on every episode of season four. So, if you haven’t seen that latest Black Mirror season, I suggest you stop reading right about now.

I have to admit, I was a little disappointed by this episode. And, while Black Mirror has made me feel disturbed and disgusted at times, the show has rarely disappointed me. Maybe it’s because I was particularly excited for this episode. Metalhead looked to be a classic, robot-dystopian plot and I thought the black and white filming was a nice touch. However, I left that episode with more questions than answers. And not in a mysterious sort of way. The plot seemed almost incomplete to me. I wanted so desperately to know the origin of the “dogs.” Where did they come from? Who built them? Why do they relentlessly pursue humans? It’s like I jumped into a movie 30 minutes in and missed important plot points in the beginning. So, while the episode featured great suspenseful moments, it was my least favorite of the season.

Per usual, Black Mirror’s complex and intense plotlines are often only as good as the actors. This episode was no different as Andrea Riseborough delivered an incredible portrayal of Mia Nolan. As the past comes back to haunt Mia’s seemingly perfect life, she quickly begins to spiral. What’s interesting about this episode is that the piece of technology at hand, a machine that can project memories, is more of a side thought. In past episodes that have touched on memory, like “The Entire History of You,” the technology was a major driving force. The machine in question in “Crocodile,” however, seems like more of a supporting character, while audiences watch reality slowly close in on Mia. In the end, like many episodes in the past, Mia completely loses it, eventually killing a baby to keep herself from getting caught. While this episode was good, it didn’t seem quite as original and creative as some of the better Black Mirror episodes.

In a past article, I predicted that “Black Museum” would be one of the most sadistic Black Mirror episodes to date. And, after seeing it, I don’t think I was far off. “Black Museum” exceeds in its ability to portray short stories inside a larger developing plot. The story follows Rollo Haynes, a seemingly nice man on the surface, who we find out has been at the helm of horrible things happening to decent people. But, as the audience’s dislike of Haynes grows and grows throughout the episode, viewers are finally soothed as the proprietor gets what’s coming to him. It’s a simple yet still surprising twist at the end to find out the man who Haynes has been torturing for years (indirectly, at least) is being avenged by his daughter. It’s the final episode of the season and one that allows viewers to end on a somewhat positive note as justice is finally served and Haynes is forced to experience some of the pain that he has dolled out over the years.

As mentioned earlier, much of Black Mirror’s success comes from its ability to portray realistic and relatable people. Most people are familiar with the term “helicopter parent,” a parent that is so concerned and worried about their child that they are constantly monitoring them. I think it’s safe to say that most parents want their children to be safe. However, what sets helicopter parents apart is the need for control over their children’s life. “Arkangel,” directed by Jodie Foster, explores this dynamic with new technology that allows one mother to not only constantly monitor her child, but also filter the world around her. And, with increased child monitoring technology coming out, “Arkangel” may not be completely out of the realm of possibility. What I liked so much about this episode was how believable it was. Every action and reaction made sense, no matter how right or wrong they were. 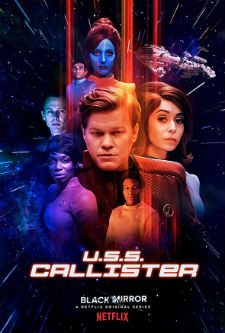 Okay, I admit it. I’m a sucker for love stories. And I do appreciate that Black Mirror gives viewers a chance to breathe with a few light-hearted episodes. While this episode can be stressful, it’s suspense lies in a sort of “will they, won’t they” storyline. With the increased pervasion of dating apps, especially among younger generations, “Hang the DJ” highlights all the anxiety and excitement of the dating world. The twist at the end was a nice touch as well, finding out that the story that’s being told is only one in 1,000 iterations inside a much larger simulation. Featuring funny, warm, and even some tense moments, “Hang the DJ” proves that Black Mirror can be versatile.

A gentle reminder that quiet, well-mannered people are not always good. Featuring a star-studded cast (at least relative to other episodes), this episode follows the sadistic manifestations of the imagination of Robert Daly, the CTO of a complex virtual reality company. Instead of, you know, communicating his thoughts and feelings with the world around him, he instead takes his anger out conscious, virtual copies of his coworkers, torturing or disfiguring anybody who doesn’t play along in his Trekkian reality. He becomes a tormenting god who eventually gets trapped in his own creation. This episode felt especially poignant as Daly’s exploitation of his coworkers seems to echo many of the harassment issues that have plagued the tech community, with otherwise “nice” people doing horrible things behind closed doors. Regardless, this episode’s creative angle, as well as dynamite performances from the cast, make it my personal favorite of season four.