YouTube has definitely opened us up to a lot of new trends. From the Mannequin Challenge to Draw My Life, we’ve seen our fair share of intriguing content. However, one type of video that definitely deserves more respect is the creation of Lego trailer remakes, a genre that doesn’t get nearly the respect it deserves. 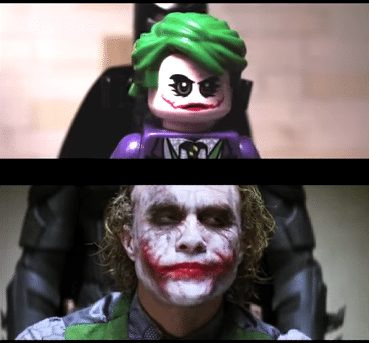 As you would imagine, Lego trailer remakes are shot for shot recreations of popular film trailers. But these aren’t just amateur stop motion projects you’d see in a grade school competition. (No offense, grade school readers.) These are well-edited and well-created full stop motion videos.

Take for example this perfect shot for shot remake of the Dark Knight Rises trailer. Everything is made perfectly, right down to the football stadium scene. While admittedly looks pretty hilarious in Lego form.

And this trend has continued to be popular, with trailers for Avengers: Age of Ultron and Suicide Squad and even The Hateful Eight.

In addition to fully remade trailers, there’s even been full scenes from movies and TV shows recreated in Lego, such as the infamous Empire Strikes Back lightsaber battle. Or even the extremely violent and extremely NSFW (you’re going to click it anyway, aren’t you?) recreation of the particularly infamous Walking Dead scene from a weeks back.

And it’s not like stop motion projects such as these are exactly easy to make. In fact, it takes about 600 individual images for each minute of stop motion animation. And considering the need for timing and fluid movement, creating these videos takes some serious dedication. Even the animators of The Lego Movie attempted to make it look as much like stop motion as possible. However, they had the common sense to use some CG as well.

Creating Lego remakes may be no easy task but it’s definitely entertaining. And, if you’re not in the mood for Lego remakes, how about some completely new content? As in “Jar Jar Binks Vs Boba Fett Lego Star Wars Christmas Adventure”? Forget Rogue One, that’s the Star Wars movie we’ve all been waiting for.