On August 1, 2007, the eight-lane I-35W Mississippi River Bridge – one of Minneapolis’s busiest bridges – collapsed into the Mississippi River during the middle of rush hour, killing 13 people and injuring 145 more. An investigation revealed that a design flaw was most likely to blame; one of the steel sheets connecting the girders and beams to the central pillars had been made too thin, and as a result rivets had been able to tear through it. The collapse served as a serious reminder of the fragility of the everyday infrastructure that we take for granted and how costly it can be when it fails. The I-35W bridge, for example, cost $234 million to rebuild, not including the damage done to the local economy because of the ensuing detours. 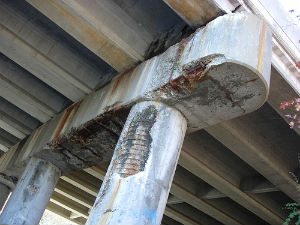 Today, there are just over 614,000 bridges in the United States, 40 percent of which are at or over the 50-year benchmark that stands as the average design-life of a modern bridge. Over the next few years the United States will be faced with a growing number of bridges that have survived past their expiration date. According to the American Society of Civil Engineers (ASCE), nine percent – roughly 55,000 – of our bridges are already classified as “structurally deficient,” meaning they require “significant maintenance, rehabilitation, or replacement.” In January, the U.S. Department of Transportation released a bulletin estimating the current backlog of this maintenance at $90 billion, a number that USDOT says could grow to more than $120 billion over the next two decades if nothing is done.

“Every aspect of your day is impacted by infrastructure,” says Greg DiLoreto, P.E., former ASCE President and current Chair of the Committee on America’s Infrastructure. “Taking a shower, throwing away trash, using your computer, and charging your phone are all possible thanks to infrastructure.” When DiLoreto says every aspect, he isn’t kidding. Think about where our food comes from. In many cases, it’s grown in one part of the country and then distributed via a freight network to other states. That freight network – ports, waterways, airports, railroads, and (of course) highways – is a major part of our nation’s infrastructure. “All [of those] deliver goods either to your door directly, or to the stores where you shop,” DiLoreto says. “Good infrastructure is essential to public health, safety, and the quality of life Americans expect, and it is the backbone of our economy, providing jobs and keeping businesses of all sizes running.”

With that in mind, it’s startling to realize how poorly American infrastructure has been handled in the last few decades. Every four years, the ASCE publishes a report, called the Infrastructure Report Card, that provides an overview of and a letter grade for the current state of several different sectors of American infrastructure. Bridges, for example, received an individual grade of C-plus, while our rail systems ranked the highest with a solid B. Roads (Grade: D) are another big one with a below-average rating. Knowing that, it shouldn’t come as a surprise to learn that the U.S. received an overall grade of D-plus on the report card published in 2017. The same goes for 2013. In fact, going all the way back to 1998 (the first year that the Report Card was published), America has consistently struggled with a D-average, even as awareness of the issue has increased, which begs the question: “Why?”

Politics could be one answer. In an article published in The New Yorker in April 2016, U.C. San Diego political science professor Steven Erie noted that “modern conservatism, with its sense that government is the problem and its aversion to government spending, has created a Republican Party that’s much more skeptical of big infrastructure projects than it was.” Conservative ideology may play a part, but both sides of the aisle share the blame today.

“After World War II, America made an investment in its infrastructure; one of the best and most visible examples is the Interstate Highway System. But then our focus on and investment in infrastructure slowed, without adequately considering maintenance needs,” DiLoreto explained. “In the 1980s, President Reagan often talked about the need to invest in our infrastructure because it was falling into disrepair, [but] little was done.”

Presidents since then – Democrats and Republicans alike – have continued the trend of underinvestment despite promises to the contrary. While President Trump has indicated that he plans to sign a bill allocating $1 trillion in funding to the infrastructure problem, DiLoreto isn’t optimistic that Trump will deviate from the precedent set by his predecessors.

“Both 2016 presidential candidates made it part of their platforms. And now, of course, President Trump continues to state his intention to pass a significant infrastructure bill,” DiLoreto says. “However, the administration’s ‘skinny’ budget was light on infrastructure funding, including for existing infrastructure programs.”

Even with that extra $1 trillion, the gap between what we are investing and we need to be investing remains large; the ASCE estimates the actual necessary amount at $2 trillion. On top of an already colossal debt, $2 trillion is hard to stomach. But, amazingly, it’s still less than the projected losses if no action is taken. In a 2016 study, the ASCE found that the U.S. could lose up to $3.9 trillion dollars (GDP) and 2.5 million jobs by 2025 because of unstable infrastructure.

No matter how you look at it, the situation is dire. But it’s not all bad. Bridges and roads are not going to start spontaneously collapsing, of course, and the plight of America’s infrastructure continues to find its way into the public consciousness. As DiLoreto describes, public opinion polls are showing more awareness, support, and investment in the issue than ever before, and legislators are being forced to take notice. “As citizens, we need to hold our legislators at all levels of government accountable for the condition of our infrastructure and the promises they have made to improve it,” DiLoreto says. Whether we’ll see these changes soon is anybody’s guess. But for now, at least, we can sleep a little easier knowing that change is on the horizon.

Unless indicated photos courtesy of, Pixabay

The Art of Crushing It