Since the mid-2000s, Akon has been recognized for his catchy tracks and incredible performances. His high, modulated vocals – partly inspired by his African roots – have made him a model act for contemporary hip-hop, earning him numerous awards and several Grammy nominations.

But we didn’t meet “Mr. Lonely” backstage at a concert, nor anywhere you may have guessed. It was at the 2017 Consumer Electronics Show in Las Vegas, at a convention center mobbed by exhibitors and blistered-toed tech geeks. And he wasn’t on a stage or speaking with a panel, either. He was right there with the rest of us, on the show floor. A scrum of onlookers forming around him, he shook our hands warmly and smiled. We were surprised at how at home he seemed, but we probably shouldn’t have been.

Akon is a major player in the tech world, his entrance arguably starting with the advent of Akon Lighting Africa in 2014. A joint effort with solar energy provider Solektra International, the project seeks to supply poor African nations with sustainable light sources. To date, the project has provided solar lamps and other utilities to over a dozen countries across the continent.

Akon’s tech involvement doesn’t end there either, as, last year, the renaissance rapper was brought on as the chief creative officer for Royole to help develop their 3D mobile theaters.

We sat down with Akon for an exclusive interview to discuss the future of Akon Lighting Africa, his views on sustainability, and his recent ventures into the world of tech.

Innovation & Tech Today: In the past, you’ve claimed that music and business are inseparable. In fact, you’ve said that you have to be a businessman first, even though you work in an artistic industry. There could be a parallel here between this and the world of sustainability, because obviously there’s money to be made there. So, what comes first for Akon Lighting Africa: sustainable value or monetary value?

I&T Today: What do you think about the power fossil fuel industries have attained with the new presidential administration? You’re an optimistic guy. How do you cope with the overt presence of non-sustainable special interests at the top of the pyramid? After all, Rex Tillerson, former CEO of ExxonMobil, is now the Secretary of State. How do you react to all of this, and, more importantly, what do you do?

A: With stuff like that, you just promote what you’re doing a little bit more. I think what they’re doing is a huge mistake. Now we’re stepping backwards. Because clearly, like you said, special interests are involved, and everyone’s trying to get as much money as they can for the four years that Trump is in. And, clearly, he’s in it for a big paycheck as well. But it sets us back. And all it’s gonna do is allow people like Russia to move ahead of us in technology. We have to think beyond the actual wallet. And we have to look at it from a standpoint of how does that impact humanity in America. Clearly those decisions are purely business and not for the people’s interest. And I think the people can clearly see it. And we’re just hoping that they see it before it damages us. 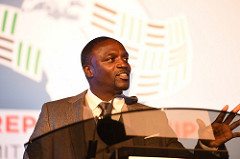 A: Well, clearly, we’re closing out all the contracts we’ve currently signed. And now we’re following up on certain countries. Just kind of revamping, restarting. We’ve opened up a solar academy in Mali where we train the locals to facilitate those contracts and give some energy education to all those people interested in tomorrow’s energy. Of course, there’s poverty in Africa. We just want to grow a real business. We’re not approaching it from no charity standpoint. We want to hire people, give people real jobs so they can provide for their real families. Not only that, but it’s literally giving light. Not just from a mental standpoint but from a physical standpoint. Clearly, from there, Akon Lighting Africa will go into Akon Building Africa, which is the infrastructure aspect of Africa. So that’s stage two, which will probably start around 2018, 2019.