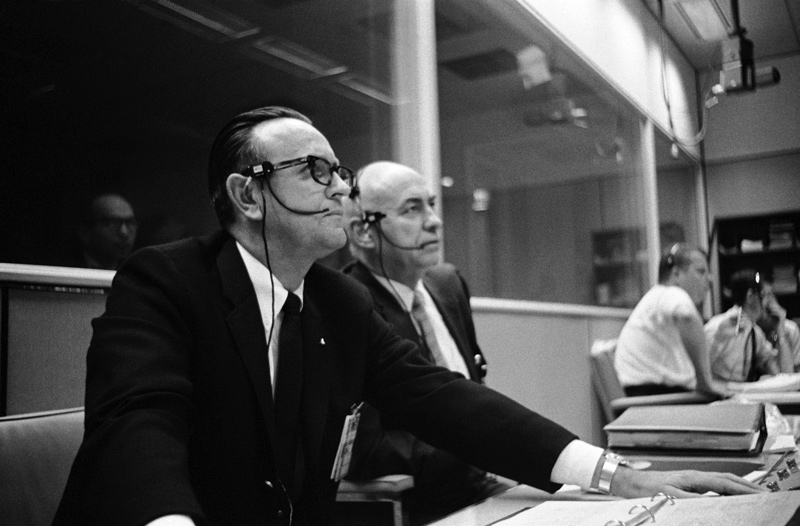 It was one of the best books written about one of mankind’s greatest feats. When Tom Wolfe published The Right Stuff, it was 1979, just 10 years after Apollo 11 touched down on the Moon to complete a dizzying first decade of space flight. The you-are-there bestselling book focused on the Mercury astronauts, all test pilots, and how the new NASA space program changed their personal lives — and what we believed to be possible. 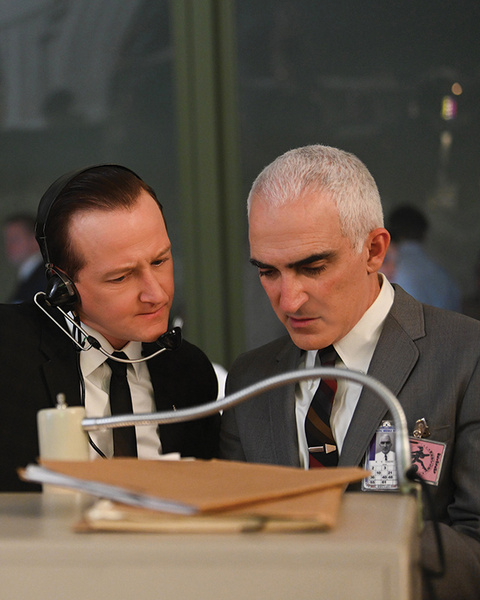 L to R: Eric Ladin as Chris Craft and Patrick Fischler as Bob Gilruth in National Geographic’s The Right Stuff, streaming on Disney +

A three-hour movie version of The Right Stuff, starring Sam Shepard, Scott Glenn, and Ed Harris, came out in 1983, winning four Academy Awards. Now, Nat Geo, Warner Brothers, and Leo DiCaprio’s Appian Way drill down even more into Wolfe’s iconic portrayal with an eight-show opening season. It will premiere on Disney+ on October 9.

The tone, gravitas, and significance of the space program in the 1960s is captured in riveting fashion by an all-star cast. This ranges from excellent portrayals of the Mercury 7 astronauts, our first, to the way in which family lives, technology, and excruciating go/no-go decisions touched the people involved, while launching us into space exploration permanently. It is the first National Geographic-branded scripted TV series to appear on Disney+. Plenty of space fans, old and new, are in for fulfilling binge-watching when it premieres.

We had the opportunity to talk with actors Patrick Fischler and Eric Ladin, who play the engineering brain trust behind America’s space program, Flight Director Chris Kraft (who died in July 2019 at age 94) and Chief Flight Engineer Bob Gilruth. In listening to them, it was easy to feel their sense of continued wonder at what NASA and American workers pulled off by putting a man on the Moon just 10 years after starting a space program — with technology we’d consider highly primitive today. 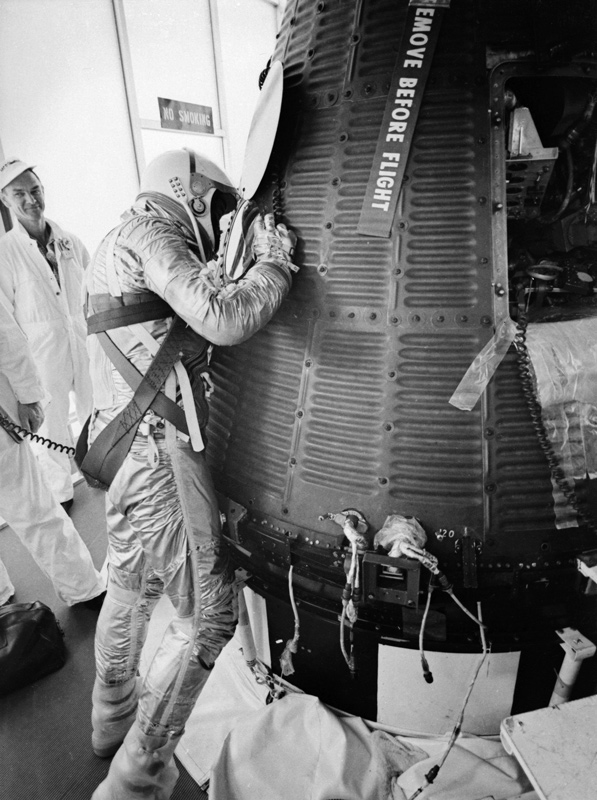 Astronaut Alan B. Shepard Jr., peers into his Freedom 7 Mercury capsule before launch on the morning of May 5, 1961. Photo courtesy of NASA

Innovation & Tech Today: Gentlemen, what first drew you to The Right Stuff? Was it the story? Your love of the early space program? The momentous achievement for humankind that it represented?

Eric Ladin: It was the words. Mark Lafferty wrote a beautiful script that attracted a lot of great actors. But space is something that has always riveted me. I grew up in Houston, visited NASA while in school, and we talked about space all the time. Being able to tell this story in long form was really appealing to me. We all hoped to be astronauts, but very few were, then I hoped to play an astronaut. When that ship sailed, I got this chance to play the Mercury flight director. It’s an honor.

Patrick Fischler: “This was one of the best scripts I’ve read in a long time; it captured me instantly. I think space takes the greatest form of storytelling there is. It has adventure, drama, purpose, questing, and a beginning, middle, and end.

The main thing is that the urgency is there, always. People love watching these kinds of adventures, because it brings out something deep in all of us. Before I took the role, I didn’t know much about Bob Gilruth. I wanted to make sure I honored him in a way he deserved. He’s responsible for the beginning of the space program, but he was a super timid man, and didn’t want recognition.

I&T Today: When watching the pilot and second episode, a number of scenes jumped out (spoiler alert). One that struck us was how 110 men signed up for a program no one knew about — they received certified letters. Both of you marveled at the moment in space history as well. Can you describe your experience in working with it?

PF: It’s my favorite scene in the pilot. Gilruth and Kraft were working in a vacuum. When they made a call for volunteers to be the first astronauts, they didn’t know anyone would volunteer. They would’ve been happy with 20 candidates. Little did they know that 110 men were thrilled to be involved. That led to their next challenge. You can only do so much testing with 110 highly qualified test pilots to decide on seven astronauts. Kraft and Gilruth relied on their instincts to choose them.

EL: The real charge is when the guys do show up. The assistant comes in and says, “two names.” “Two names? We only got two?” “No, only two guys didn’t show.” Kraft and Gilruth weren’t prepared for this; they had to ask themselves, who will have the best relationships with each other and with us? Chris was not a fan of John Glenn; he’d run into him when Glenn was a test pilot. He didn’t like Glenn’s stubbornness. But that stubbornness made Glenn a great test pilot, and then a great astronaut. 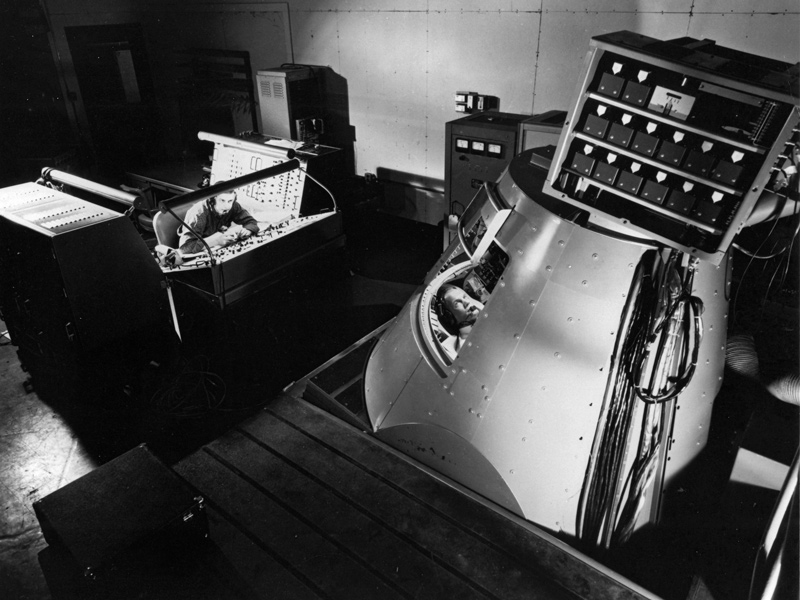 John H. Glenn, one of the Mercury 7 Astronauts, runs through a training exercise in the Mercury Procedures Trainer at the Space Task Group, Langley Field, Virginia. This link-type spacecraft simulator allowed the astronaut the practice of both normal and emergency modes of systems operations. Photo courtesy of NASA

I&T Today: The show also dives headfirst into the astronaut family story, which played out publicly in a feel-good way throughout the 1960s, but was far more complicated behind the scenes.

PF: What happens to the astronauts and their families? What happens inside their homes? I love how we portrayed it. These were test pilots, known in the military but not outside it.

Within weeks, thanks to Life magazine and NASA’s announcement, they became seven of the most recognizable faces in the world. It’s exciting to see them turn into instant celebrities, which some handled better than others, as we show.

EL: I don’t believe NASA was looking at how the men would translate as celebrities. Kraft and Gilruth were engineers, and then Life came into the picture and boosted seven astronauts into celebrity… it was quite a headache for Craft.

I&T Today: Another sticky point well-portrayed is how these test pilots, who always took their lives in their own hands, suddenly had to let NASA flight engineers on the ground control their flights – since the astronauts weren’t actually flying the Mercury spacecraft.

EL: Test pilots have huge egos — they have to. In the show, Alan Shepard tells about the conflict of trying to lose his edge, which people and public relations want, but the edge kept him alive; his willingness to live on the edge made him a great test pilot. When they realize they’re going to be “spam in a can,” it’s obviously a huge problem for them.

On one hand, they’re doing interviews, buying Corvettes for a dollar, having the time of their lives. On the other, they don’t actually get to fly the spacecraft.

PF: I watched the show with my daughter, who’s 11. She said, “I didn’t know anything about any of this.” She kept asking, “Was this true?” She was surprised when my answer was always “Yes,” when we showed how complicated the job was and the relationships with their wives were. In one sense, the space program projected a 1950s sort of simplicity, but that simplicity didn’t exist for any of the astronauts or their families. 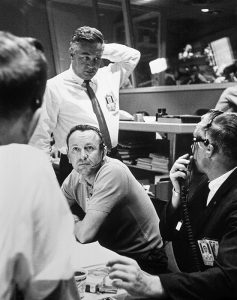 I&T Today: A most miraculous thing about the 1960s space program is that we even got off the ground. We literally had to build the technology from scratch. By today’s standards, it’s really primitive — and yet, the space program started the buildout that led to many of the conveniences and tech we enjoy today. Your thoughts?

EL: It amazes me what was accomplished with so little technology. For young people to see this when they watch the show, while playing with their smart phones, apps, talking to anyone in the world in any number of ways… your smart phone has more computing power than the command modules and lunar landing vehicles did.

Yet, these Mercury, Gemini, and Apollo engineers used slide rules, graphs, and their brains to put people in space from remote locations all over the world.

When we went to the Mission Control Block House in Cape Canaveral and saw what engineers worked with 60 years ago… it’s amazing to think they actually got this done.

I&T Today: And with that, The Right Stuff hits home on the emotional component, how engineers felt inside about sending these men into space — and how then, it seemed, people were willing to “push the red button” more than today. Can you elaborate?

PF: These guys took this very, very seriously and very much to heart. Getting to the Moon, and all the missions beforehand, was their entire life for a decade. Bob Gilruth died a thousand deaths every time a rocket went up with a human on top of it. He feared for every astronaut who ever flew. The show brings out the fear that existed in he and Kraft. People don’t think about that. They rode a fine line, every day. If it goes one way, it’s an utter disaster. If it goes the other, it’s utter celebration. How terrifying.

EL: We don’t push the red button now like we did then. We’re too caught up in ‘what if’s’ and needing to have all this security and regulation for everything. This is a different generation, a different time. Maybe we know too much. The generation that became our astronauts and engineers in the ‘50s and ‘60s lived to a different mantra. If you asked any of them if they’d be willing to die in space, they’d say ‘Yes.’ If you asked if they’d step aside because they were worried about dying, they would never let that happen. It speaks to why they felt more comfortable taking major risks. 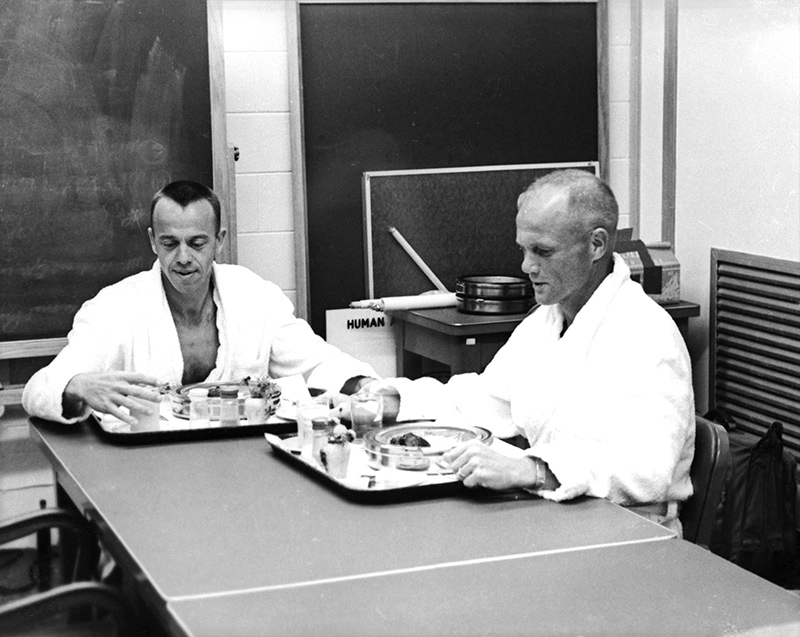 I&T Today: Both of you have stated you think the timing of this show’s release is significant for more than start-of-fall-season reasons.

PF: Sometimes, I feel specific shows can change the course of where we’re going. Right now, in these tumultuous times, The Right Stuff really speaks to the possibility of humans, what we’re able to create, and where we can go. People are working out there to get us out of the situation we’re in. The same with the engineers and people behind the scenes doing this for space.

EL: Has there ever been a time when we’re in more need of inspirational or aspirational shows than (nine) months into 2020? We need a TV show that reminds us of our possibilities. Instead of picking up at Apollo, what everyone most remembers — the moon walk — we took it back all the way, to what they accomplished in the decade leading up to Apollo 11. Hopefully, when we get to a Season 5 or 6, we can show people like Elon Musk sending us back to the Moon, then to Mars.

I&T Today: Finally, what do you think is the greatest single achievement of the 60-year history of the space program?

PF: For me, our greatest accomplishment in space was Shepard’s flight, because of how crucial it was. If we could get one guy up, then it was a rocket ship blasting us to Apollo and beyond — and that’s what happened.

EL: Putting a man on the Moon. With the difficulty of the mission, time in history, using not just one craft but two, the dramatics of seeing fellow humans walking on the surface… that’s the greatest achievement. Kraft wrote in his book about running into a World War II veteran right after Apollo 11. The veteran was crying as he told Kraft, ‘That makes me as proud as anything I’ve seen.’