In the age of The Bachelor and Keeping up with the Kardashians, we should count our lucky stars that pop culture science isn’t a complete oxymoron. As one of the most recognizable science communicators out there, Mythbusters’ Adam Savage has a passion for making education as fun as possible. Also, like many people in the entertainment industry, Savage is giving his web presence the attention it deserves — his YouTube channel “Tested” garnering approximately three million subscribers. It’s no wonder he decided to team up with YouTube science mogul Michael Stevens for a live national tour dubbed Brain Candy. In this exclusive interview, Savage tells us about his transition to online media and his love of education.

Innovation & Tech Today: You recently teamed up with Vsauce’s Michael Stevens for a series of live performances. What is it like taking science on the road? 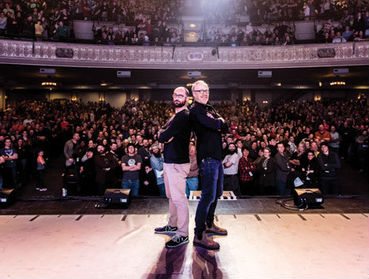 Adam Savage: I’ve discovered a genuine love for live performance. I love telling stories on television and on YouTube through MythBusters and through my website, Tested.com. Live performance is a fundamentally different experience and a really lovely one in terms of the immediate interaction with fans.

In late 2015, [Mythbusters co-host] Jamie Hyneman decided he didn’t want to tour anymore. We had done about 200 cities in three different countries over the years. I called up Michael Stevens from Vsauce. He and I have been longtime mutual fans of each other.

I really love working with Michael. I loved working with Jamie, and it’s a totally different ballgame to play with Michael on this level. He’s an excellent collaborator. He has a real theater and improv background, so we can really play off of each other…which means that every performance is different, because we’re trying different things.

I&T Today: Like Stevens, you’ve adopted YouTube as a way to entertain and inform audiences using science. However, you have a solid background in conventional television. What has it been like to make that transition?

Adam Savage: It’s been lovely. I started doing Mythbusters in 2003. I have watched the share of people watching television decrease over the 14 years we made the show. I have watched the online world explode in that same period of time… I think of online right now as an incubator and as a vanguard for the future because I don’t think television as we know it will exist in 20 years. What we’ll have is going to be something that looks very different, but there’s always going to be a need for content. That’s what Michael and I love to produce, whether it’s on television, or on YouTube, or on stage.

I&T Today: What was the major difference when you first started to ramp up your YouTube content? Was there something you were immediately struck with?

Adam Savage: On Mythbusters if we wanted to highlight a [live] build, we’re still holding to the television structure. We still have 42 minutes to tell a story, which means we have narrative beats that we have to hit. We have commercial breaks we have to tease for. We have parts of the story that we have to call forward and call back to. It means that even the longest build on Mythbusters probably was comprised of two- to three-and-a-half minutes of screen time.

But I can build a sword out of aluminum here in my shop, and we can make it a 35 minute video. I can sit and watch half a million people watch that video, and I also get direct feedback from them. That conversation is really useful. I love hearing the responses on an immediate level to what you’re doing because on television you shoot something, you edit it, and it goes up (at the very quickest) in three or four months after you’ve shot it. On YouTube, it’s three or four days.

I&T Today: What would you say is your favorite experiment during this Brain Candy tour so far? 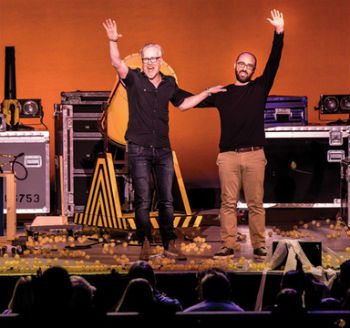 Adam Savage: We play around with the ability to visualize air using smoke, and this discussion culminates in a demonstration to the audience of how to think about air currents utilizing smoke in a way that makes the audience gasp every night. Applause is nice, but a gasp is something that is truly amazing from a performing standpoint. As David Mamet was famous for saying, you can blackmail an audience into a standing ovation, but you cannot blackmail them into a gasp. When I hear an audience gasp, they’re making the same sounds I made the first time I saw the effect that we built on stage. That brings me right back to the origin of why I love doing what I do. Michael and I, we both made the same sound when we built this piece with smoke and air. To hear that come back from the audience is so deeply satisfying.

It also feels a little like being a teacher. I have taught in the past. I taught advanced model making at the Academy of Art College. That “aha!” moment, giving the student that aha moment is absolutely an endorphin rush like no other. The stage show feels a bit like that.

I&T Today: As one of this generation’s scientific role models, could you share some of yours growing up?

Adam Savage: I was an early adopter of science fiction among my peers. People like Robert Heinlein, Philip K. Dick, and Harlan Ellison. I absorbed all of that stuff voraciously. I think that gave me my first taste of how many different ways there were to look at a subject.

I was also blessed to have some truly great teachers in the public school system in Tarrytown, New York where I grew up. I had four or five teachers that really saw me and helped me see myself and find my curiosity. I’m really grateful for that, specifically for the Tarrytown Public School systems for bringing me and those teachers together.

My freshman earth science teacher in high school, Dan Frare, found fascinating stories to tell you about physics and about earth science, so [he] told our classroom that the best way to think about a glacier was to picture it as a river on quaaludes. I still have not heard a better physical definition of a glacier in terms of understanding how it works and how it moves.

[Frare] found a way to tell that story. That hit me like a ton of bricks the moment he said it, and I was 14. It still fascinates me now, and that’s sort of a touchstone for me. It’s the kind of storytelling that Michael and I try to do on stage.

I&T Today: Science education is under fire right now in the public school system. Do you have any thoughts on how to change the culture in that respect? What can we do to make that happen?

Adam Savage: I’m not a certified educator. Whatever education I may have done is ancillary to the primary storytelling that I’ve been doing, and I’m grateful that so many people have found Mythbusters and the other stuff that I’ve done resonant and educational. I just want to say that as a caveat before I speak about the state of education… There are hundreds of thousands of really brilliant people out there who are working hard every day to improve public education. By “improvement,” I think it’s pretty universally understood that equalized access for our whole population to a good education is absolutely vital, not just for the individuals in our culture, but also for the culture itself.

We are in a current situation where, in my personal field, poor people are considered a special interest by the majority of people in our government. They have sought to limit the resources available to the poor, whether it’s through welfare block grants or Medicare and Medicaid diminishment…When states are having trouble budgetarily, the first line items to go are things to do with education. That is a crying shame.

…I would bring back theater, and I would bring back shop class, and I wouldn’t have makerspaces in just all the private schools. One of the beautiful things I see as I’ve been traveling around the world in the last couple of years is looking at makerspaces and trying to take lessons from what people are doing at work. What’s really impressive is the whole makerspace culture is so new. I find makerspaces in schools where the teachers are learning right alongside the students, and they’re expressing the fact that they’re learning right alongside the students. It’s really empowering for students. Too often education is structured for kids, such that the teacher is the one with the knowledge and the student is the ignorant one, and there’s information passing from one to the other. That’s not what happens in a good classroom. In a good classroom, a real exchange happens where the teacher learns from the students, and the students learn from the teacher.