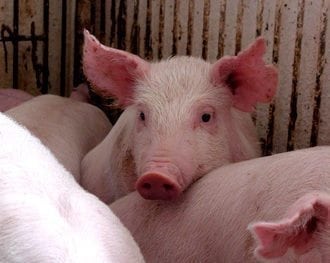 Scientists at the University of California, Davis are working to use pigs as incubators to grow human organs, hoping to eventually decrease the worldwide shortage of transplant organs.  Currently, the pigs are being used to grow human pancreases. The work is in its preliminary stages and a long way off from clinical use, but is continuing despite a moratorium from the National Institutes of Health on the funding of such research.

The scientists begin with a one-day-old pig embryo.  They first use CRISPR gene editing, a technique that allows scientists to manipulate specific points on a genome, to extract the DNA that causes the embryo to grow its own pancreas.  By removing the pig pancreas DNA, the scientists create what is called a genetic “niche,” a gap that is then  filled by injecting human stem cells.  The ideal result is an embryo that will grow into a pig fetus with a human pancreas.

At this stage in the research, the embryos are developing in the sows for 28 days. Then the pregnancies are terminated and the tissue removed for analysis.  However, the leader of UC-Davis team, reproductive biologist Pablo Ross, told the BBC that he hopes the eventual animals will look and behave like normal pigs, except for the one organ that will be composed of human cells, and “could be compatible with a patient for transplantation.”  This process could eventually be repeated to grow desperately needed hearts, kidneys, livers, corneas, and lungs.

The human-pig embryos, known as chimeras, have raised alarm from government entities, animal activists, and those who study biomedical ethics.  The NIH instated the moratorium in September 2015 because they feared the human stem cells could travel to an animal’s brain, thus making it more human.  The team assured the BBC that such stem cell movement is unlikely.

How Big Data is Normalizing Telehealth During COVID-19

These Startups are Helping in the Fight Against Coronavirus